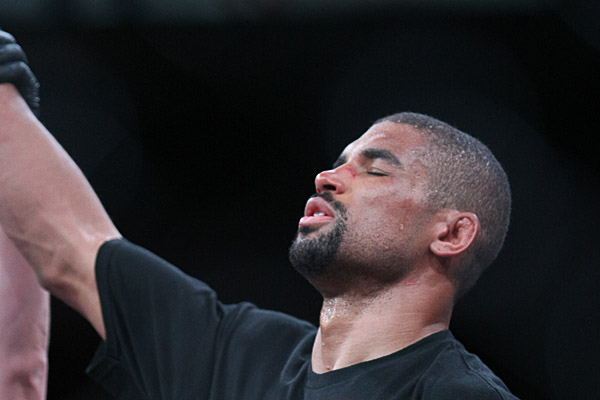 When Bryan Baker steps into the cage against Ben Saunders at Bellator 67 on Friday night, he will be vying for more than just a spot in the Season 6 welterweight tournament finals.

“The Beast” will also be fighting for his pregnant wife and soon-to-be-born son. Baker says that while earning personal glory is nice, fighting for his family has given him an entirely new outlook on his career.

“I have always been a very motivated person in my life and in the cage, but having a baby on the way gives me an entirely different type of motivation,” Baker recently told Sherdog.com ahead of his bout with Saunders at Casino Rama in Rama, Ontario. “When my child comes into this world, he is going to look at me for everything. I have to make sure I am there for him and can provide for him and do everything he needs me to do. That pushes me to be the best father, the best husband and the best person I can be.”

These are heady times for Baker, who comes off a win over Carlos Alexandre Pereira in his welterweight debut at Bellator 63. In 2010, the California native was diagnosed with chronic myelogenous leukemia. After sending the cancer into remission, Baker proposed to his wife following a victory over Joe Riggs at Bellator 43 this past May. Looking back on the situation, the fighter has difficulty believing how far he has come.

“I never could have imagined this day a little over a year ago. I have a big win under my belt. I am married now, and I have a child on the way. It’s absolutely crazy. It blows my mind when I think about it,” he said. “A little over a year ago, I was battling leukemia. I didn’t know where I was heading, and I was coming off of a loss. It’s amazing how quickly your life can turn around if you keep the faith.”

Heading into his bout with Saunders, Baker knows he still has room for improvement, especially at his new weight class. The win over Pereira wasn’t overwhelming, as Baker scored with kicks to the body and likely clinched the fight with a takedown in the last 30 seconds of round three. The Jackson’s MMA representative expects to give an improved performance against the “Killa B.”

“I definitely don’t think I showed what I am capable [of] in my last fight with Carlos Pereira,” he said. “I know I am a thousand times better than what I showed in that fight. I was really focused on getting the win and [was not focused on] showing what I can do -- and that’s not normally what I am about.”

Saunders advanced to the welterweight semifinals with a unanimous verdict over Raul Amaya. The American Top Team export has tasted defeat just once in Bellator competition, falling to Douglas Lima in the Season 5 tournament finals. The 29-year-old also posted a 4-3 record with the UFC before being released from the promotion in 2010.

Baker believes his upcoming fight will hinge on who can dictate distance more effectively.

“Ben Saunders is long just like I am. I feel like that makes him a really good fight for me,” Baker said. “He likes to throw from the outside, and he likes to be in the clinch, but I don’t think he likes to box at that mid-range. I think I am going to own that mid-range in this fight. If he gets in close, I believe my hips are better than his in wrestling and in judo, and I don’t believe that he will be able to land the strikes he is going to want to land.”

After watching tape of Saunders’ loss to Lima, “The Beast” is confident he can exploit the holes in his opponent’s defense. Though he hopes to end Saunders’ night inside of the 15-minute time limit, Baker says he will not be reckless in pursuit of the knockout.

“I know he can be finished, and I am going to be looking for that shot to finish him. Lima showed that if you connect right on the button, he will go down, and that is what I am going to try to do,” Baker said. “I believe I have the power in my hands to do that. However, I do get myself in trouble when I try to headhunt. I am going to try to outbox him, get my timing, pick my shots and generally just beat him on my feet.”