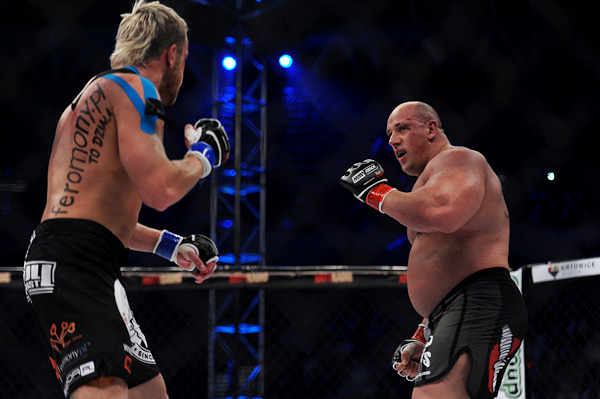 Despite being 110 pounds lighter, Ozdoba was clearly more skilled than his completely inept opponent. However, he chose to mostly run away.

Despite repeated urgency warnings from ring referee Marco Broersen, the fight was a standstill for almost the entirety. Ozdoba had his opponent rattled in rounds one and two, and Burneika sent him to the canvas in round two. However, these were about all the strikes thrown in the abysmal contest. The public roundly booed the fight in the third round, which finally saw Broersen lose his patience and disqualify Ozdoba for timidity, giving Burneika the second win of his bizarre MMA tenure.

In a razor-thin fight that went the distance, Damian Grabowski beat Stav Economou by split decision in the co-main event. Grabowski, who prepared for this fight at the American Kickboxing Academy, looked worn out by the constant sparring and was routinely beat to the punch by Economou, who was particularly effective with his uppercuts.

The Pole did secure takedowns but couldn't pass his rival's guard, and his vaunted ground game seemed stifled. In what was his best moment of the fight, Grabowski got full mount and connected on some heavy shots late in round two. The tit-for-tat affair went the distance with scores of 30-29 and 29-28 for Grabowski, and a dissenting 30-29 for Economou from the third judge. Grabowski moves to 17-1 with the victory, while Economou falls to 14-3-1. After more than a year away from the cage, Tomasz Drwal celebrated his comeback in grand fashion, submitting Wes Swofford with an armbar in round one. The middleweight affair started out as a slugfest, which Drwal was winning -- but "Gorilla" decided to take the fight to the ground anyway. There it was complete domination. After landing heavy strikes, Drwal went for an armbar and got it in textbook fashion with 3:00 on the clock.

Despite a rough start, Krzysztof Jotko came from behind to grab a decision victory over Bojan Velickovic. The Serb started with heavy low kicks that quickly limited Jotko's movement, but the Pole showed signs of life in the second stanza when he briefly had Velickovic's back.

Round three was a completely different story as Jotko dominated his exhausted opponent, relentlessly punching the grounded fighter. He did not finish Velickovic, but it was enough to earn Jotko unanimous 10-8 scores and ensure his victory via majority decision. Two judges scored the bout 29-28 for Jotko, while another had it 28-28.

Karol Celinski drew with Michal Fijalka in an all-Polish light heavyweight affair. Celinski seemed to have the better of the striking, connecting with punches and the occasional muay Thai knees. For his part, Fijalka had the takedowns, although it seemed the volume of his offense on the ground was not equal to Celinski's strikes. In round three the tide of the fight began to turn as the tired Celinski gave up more takedowns and ground control to his opponent. Photo: P. Pedziszewski/Sherdog.com
Drwal's inactivity didn't slow his roll.
A thunderous left hook brought victory to Oskar Piechota, who felled Livio Victoriano at the 1:50 mark of round two. Piechota, a couple of weeks removed from becoming the European FILA grappling champion, showcased lethal striking. When Victoriano charged in with a looping hook, Piechota threw a perfect, mirrored counter that sent his foe crashing to the canvas.

The wrestling of Marcin Lasota was too much for Tymoteusz Swiatek to handle in a clash of two top Polish bantamweights.

Lasota controlled the space of the fight with numerous takedowns but his cautious approach to striking led Świątek to shout expletives directed at his rival. This did not help him fend off a rear-naked choke attempt 2:50 into round three. Swiatek did not tap out, but Marc Goddard stopped it as soon as the fighter lost consciousness.

Piotr Hallmann had to wait to see the judge's scorecards for the first time in his career, but he managed to outlast Juha-Pekka Vainikainen over the course of three rounds. The navy man from Gdynia scored frequently with his powerful left hook and by round two, started to abuse his opponent with ground-and-pound. Vainikainen had no answer for this kind of attack and ended up losing by scores of 30-26 [twice] and 30-27.

Tomasz Drwal's protege Damian Milewski got his second pro win, tapping out Arkadiusz Zaba with an armbar 2:14 into a volatile first round.

In the sole women's fight of the evening, 18-year-old Agnieszka Niedzwiedz overcame early adversity to defeat Klaudia Apenit with punches from mount 4:02 into the second frame.

Bartlomiej Kurczewski made a successful cut down from two divisions and tapped out Damian Pronobis with a heel hook 4:01 into round one.