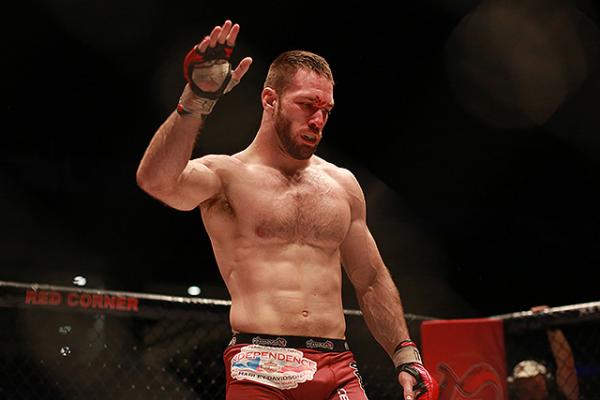 
Bubba Bush didn’t give Alfonso Gonzales a moment to breathe.

“The Fighting Texas Aggie” retained his middleweight crown with a first-round submission victory over Gonzales in the Legacy Fighting Championship 31 headliner at the Arena Theatre in Houston on Friday night. Gonzales, who replaced the UFC-bound Roger Narvaez on short notice, succumbed to a rear-naked choke 4:19 into the opening frame.

Once the opening bell sounded, Bush (8-2) wasted little time walking his opponent down and getting him to the canvas. The Brazos Valley MMA representative spent the rest of the frame moving from one dominant position to another. From full mount, Bush opened up with ground-and-pound, creating an opening to transition to an arm-triangle choke. However, the champion was unable to free his leg from half guard to complete the submission.

Bush was undeterred. He quickly changed course, spinning to his foe’s back and securing both hooks. Gonzales (5-1) fought him off for as long as he could, but Bush finally flattened his man out and elicited the tapout with a rear-naked choke.

Had Gonzales been able to make it to the horn, things might have turned out differently.

“He was doing a great job of staying calm and composed,” Bush said. “If I come out of that and I don’t finish, my arms are burnt out and he’s not. So, he had a good game plan. If he made through that round, the second round [becomes] harder.”

As a bantamweight, Damacio Page made a name for himself with his heavy hands. Now 10 pounds lighter, the UFC and WEC veteran showcased his wrestling and submission prowess in his flyweight debut.

Page (18-9) was completely dominant in submitting Elias Garcia (4-2) with an arm-triangle choke 2:47 into the third-round of the evening’s co-main event. Takedowns, positional advancements and periodic ground-and-pound sapped most of the drama from the contest.

“I’ve been working my butt off. Everybody doesn’t know that I’ve been wrestling; I told you that last time,” Page said. “I decided to display it. Elias has a warrior heart. The guy is a very tough individual. I’m happy he took the fight when no one else had the balls to take the fight.”

The Jackson-Wink MMA representative nearly had a finish in the opening period, as he secured a triangle choke from his back and tightened the hold when Garcia attempted to slam his way out of the predicament. Page eventually transitioned to mount while maintaining the hold, but Garcia somehow escaped.

Rounds two and three were less eventful. Page landed takedowns and maintained heavy pressure from above before gradually working his way into position for the fight-ending choke. The New Mexican was originally scheduled to face Henry Cejudo for Legacy’s vacant 125-pound title, but the Olympic gold medalist withdrew from the contest due to personal reasons. Page capped off his night with a message for Cejudo.

“You had your glory; you got your gold. Give me my glory; I want my gold,” Page said.

Elsewhere, Sao Paulo, Brazil’s Diego Henrique da Silva landed a perfectly timed counter-right hand to stop Alex Morono 1:55 into the opening round of their welterweight clash. Da Silva (6-2) has finished all of his victims inside of a round.

As Morono (6-3) attempted to land a right hand, the 27-year-old “Gaucho” simultaneously launched a right of his own. The Brazilian’s offering landed, clipping his foe on the chin and dropping him to the canvas. A barrage of follow-up punches forced referee Chris Reed to step in as Morono regained his senses and groggily grabbed a hold of da Silva’s leg.

What was shaping up to be an entertaining clash between Justin Reiswerg and Jared Chaffee met a premature end when a nasty gash over Chafee’s left eye forced the cageside doctor to call a halt to the lightweight bout before the second round began.

Reiswerg (7-3) busted his opponent open with three successive knees to the head as the two combatants returned to their feet in the opening frame. As the round progressed, blood began to seep into Chaffee’s eyes and impair his vision. The early portion of the bout was characterized by back-and-forth grappling, with Chaffee on top and Reiswerg threatening with submissions before ultimately reversing position.

Alex Black earned his sixth consecutive victory, taking a split decision (30-27, 28-29, 29-28) over Eric Valdez in a featherweight scrap. A strong finish sealed the victory for the 4oz. Fight Club member, who went the distance for the first time during his current streak.

While the aggressive Valdez (3-2) had the edge in punching exchanges, the larger Black (7-3) often imposed his will near the fence, where he was able to secure underhooks and attack with knees. Valdez was able to tag his foe on a couple occasions, but he too often found himself locked up with the 6-foot Houston native. Black put his stamp on the fight late in round three, as he landed a takedown, took his man’s back and hunted for a rear-naked choke as time expired.

In the evening’s first main card bout, Charlie Ontiveros captured a unanimous verdict over Artenas Young in a largely uneventful welterweight clash. All three judges scored the bout 30-27 in favor of Ontiveros (5-2).

Ontiveros relied on a number of kicking attacks to keep the fight at a comfortable range, including several side kicks to Young’s lead knee. While he never seriously hurt Young (10-8), the karate stylist landed kicks to the legs, head and body to pull ahead on the scorecards. Meanwhile, “Chico” was never able to consistently put any type of punching combinations together.

In earlier action, Aaron Reeves defeated Steven Rodriguez via TKO at the 1:56 mark of round one; Trevin Giles tapped Patrick Hutton with an armbar 2:11 into the opening frame; Delis Borges stopped Kolton Englund in 46 seconds and David Acosta submitted Joe Angel Zamora with a kimura 4:30 into the opening stanza.