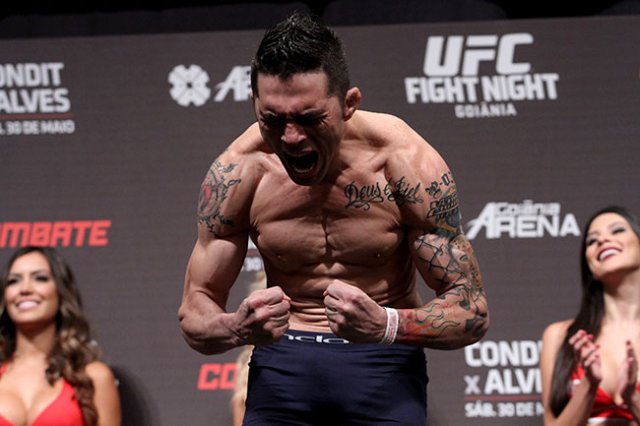 “Rony Jason” will be out of action until 2016. | Photo: Gleidson Venga/Sherdog.com


Rony Mariano Bezerra’s nine-month suspension has been upheld by the Brazilian MMA Athletic Commission (CABMMA) after his ‘B’ urine sample also tested positive for the diuretic hydrochlorothiazide.

CABMMA released a statement regarding the test to Sherdog.com on Tuesday. “Rony Jason” initially tested positive for the diuretic following his first-round submission victory over Damon Jackson at UFC Fight Night “Condit vs. Alves” on May 30 in Goainia, Brazil. In addition to the suspension, Bezerra’s victory was overturned to a no contest.

While hydrochlorothiazide is not classified as a performance-enhancing drug by the World Anti-Doping Agency, WADA considers it a “specified substance” due to its ability to mask the presence of PEDs.

Bezerra disputed the positive test shortly after the results were was revealed.

“I've never used anything and this time was no different,” Bezerra told Sherdog.com. “I already did seven fights in the UFC and always made weight; I'm totally professional upon that. I've trained hard and even being hurt I kept my weight under control. I’m going to ask for a second test, and, as always, I'm available in case UFC wants to do any other tests on me. I'm already talking with my doctors, my team and nutritionist.”

The Brazilian commission’s full statement is as follows:

First, it is important to state that CABMMA is an independent entity dedicated to the development and regulation of MMA in Brazil. The UFC voluntarily submits itself to the rules and regulations adopted by the entity and so did Mr. Rony Mariano, through his affiliation prior to the event. It must be clarified that the entity follows the parameters set by the Nevada State Athletic Commission. Likewise, it must be stressed that the determination of the suspension is based on precedents involving such entity.

When the athlete´s result of sample “A” was communicated by the laboratory to CABMMA, the athlete was immediately contacted by phone and documents sent to him by e-mail before the result was informed to the UFC and any official statement sent to the media. Therefore, the athlete was aware of his result and the possibility of testing his sample “B” was clearly informed to him at that occasion.

The appeal analyzed by the Executive Committee basically ensured that (i) the procedure for collection of the sample was done in accordance with the required standards, and (ii) Mr. Rony Mariano´s sample “B” urine went through the correct process of testing with the presence of the athlete´s legal representative.

The UCLA Olympic Analytical Laboratory (WADA Accredited Lab) analyzed sample “B”, as per request of the athlete, and the result once again was ADVERSE for diuretic hydrochlorothiazide.

Based on the above, the nine-month suspension is maintained, counting as from 30/05/2015.