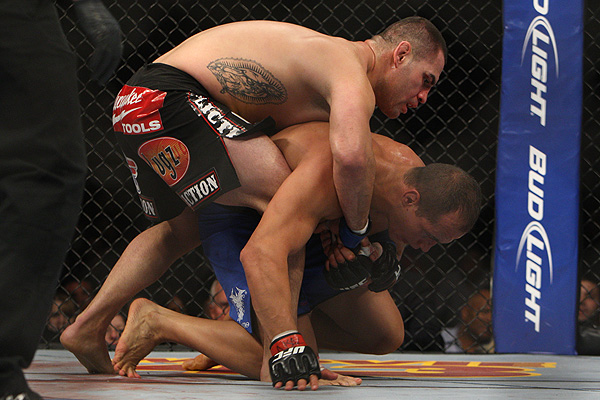 
Cain Velasquez waited 13 months for a second chance, and he made certain it would not escape his grasp.

Velasquez (11-1, 9-1 UFC) handed Junior dos Santos a protracted beating over five rounds, as he earned a unanimous verdict and recaptured the Ultimate Fighting Championship heavyweight crown in the UFC 155 “Dos Santos vs. Velasquez 2” headliner on Saturday at the MGM Grand Garden Arena in Las Vegas.

“This was the hardest fight I’ve ever been through,” he said. “I was so tired, but I just kept thinking in my head, ‘Just do it. Do it.’ All my coaches helped me so much and pushed me to do this. This is for them.” 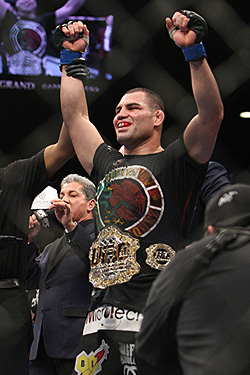 D. Mandel
Velasquez regained his title spectacularly.
Velasquez was in dos Santos’ face from the outset, walking through heavy fire and answering with plenty of his own. A devastating overhand right sent the Brazilian careening to the canvas in the first round and permanently altered the trajectory of the rematch. Velasquez swarmed with his trademark ground-and-pound, but dos Santos somehow survived to see round two. Still, the damage was done.

“He’s a tough dude,” said Velasquez. “That overhand right, I learned from ‘Pops,’ the coach of my coach, Javier Mendes. I’ve been working on it, so I’m glad I could do it.”

In rounds two through five, Velasquez brutalized the champion in the clinch and grounded him at will. Dos Santos (15-2, 9-1 UFC) fought back valiantly but had no steam on his punches. By the conclusion of their 25-minute encounter, his face was barely recognizable because of all the bruising and abrasions; a grotesque swelling reared near his right eye. Their head-to-head series now even at 1-1, the two goliaths figure to meet again someday soon.

“It feels very good,” Velasquez said. “I know he’s going to come back stronger, so I have to get better. That is the name of the game.”

Preliminary FightMetric figures show Velasquez was successful on 11 of his 33 takedown attempts, all while out-landing dos Santos 210-66 in total strikes and 111-57 in significant strikes. The defeat snapped a 10-fight winning streak for the 28-year-old Brazilian.

“His game is very effective,” dos Santos said, “and, tonight, he was better than me.” 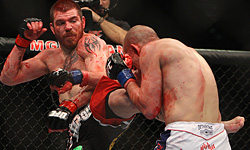 D. Mandel
Miller vs. Lauzon was an absolute war.
In the co-main event, Jim Miller spilled fellow lightweight contender Joe Lauzon’s blood all over the cage, as he captured a unanimous verdict from “The Ultimate Fighter” Season 5 alum. All three judges saw it the same: 29-28 for Miller (22-4, 11-3 UFC), who has posted nine wins in his last 11 outings.

“Joe is one of the toughest guys in the world, and that’s why he’s near the top of the division,” Miller said. “I knew I was going to have to give him everything I had if I was going to put him away.”

A series of savage standing elbows from the AMA Fight Club mainstay opened a sickle-shaped laceration near Lauzon’s right eye in the first round. Before long, blood was everywhere. Miller hit Lauzon with everything in his considerable arsenal, from leg kicks to left crosses, but he could not take him out. Lauzon fought on, even as pools of his blood dotted the Octagon.

“I was hoping they wouldn’t [stop the fight due to the cut],” Miller said. “I step in here so that the three people inside the Octagon are the ones who decide the winner, not anybody sitting outside. I didn’t want the judges [to decide the outcome] or the doctor to stop it.

“Five more minutes can feel like an eternity in here when you’re the nail,” he added, “but 15 minutes is not that long of a time, so I just kept moving forward.”

Lauzon (22-8, 9-5 UFC) made a last-ditch attempt at an unlikely victory in the closing seconds of round three, as he trapped Miller in a leg lock and transitioned to a front choke. However, the horn sounded, bringing an end to one of the bloodiest battles in recent memory.

“[The leg lock] was pretty close,” Miller said. “That was a beautiful move. I knew it was coming, and even with how tired he was, he was still able to throw it out there.” 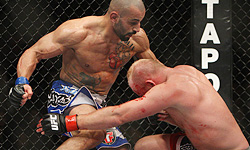 D. Mandel
Philippou stopped Boetsch with leather.
Serra-Longo Fight Team representative Constantinos Philippou notched the most significant win of his career, as he stopped a bloodied and injured Tim Boetsch with third-round punches in a pivotal middleweight showdown. Philippou (12-2, 5-1 UFC) put away “The Barbarian” 2:11 into round three.

Boetsch (16-5, 7-4 UFC) was strong out of the gate. He sucked Philippou into the clinch, secured a pair of takedowns and floored the former Ring of Combat champion with a front kick late in the first round.

During the break between rounds, however, it became clear Boetsch had become handicapped by an apparent hand injury. An inadvertent eye poke and cut to his forehead did not help his cause in round two.

By the start of the third period, Boetsch was a spent force. Philippou assumed top position after the AMC Pankration product tried in vain to move the fight to the ground. From there, he bashed away with punches, forcing the stoppage. Philippou, a replacement for injured teammate Chris Weidman, has quietly rattled off five consecutive victories. 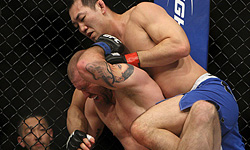 D. Mandel
Okami overwhelmed Belcher yet again.
Perennial middleweight contender Yushin Okami ran a grappling clinic on Alan Belcher, as he cruised to a unanimous verdict in a featured scrap at 185 pounds. All three judges scored it for Okami (28-7, 12-4 UFC): 30-27, 30-27 and 29-28.

Belcher (18-7, 9-5 UFC) spent far too much time on his back, either planted there by the Japanese judoka or his own ill-advised submission attempts. Okami was in his element in top position, as he smothered the Roufusport export with positional dominance and occasional ground-and-pound.

Trained by former world kickboxing champion Duke Roufus, Belcher’s best chance at victory came and went in the third round, where he dropped Okami with a short right hand inside the first minute. The 31-year-old judo black belt kept his wits, punched his way into the clinch and eventually grounded Belcher again. Okami moved to mount with 1:54 to go in the fight and ultimately forced a desperate Belcher to surrender his back.

Okami has won five of his last seven bouts. 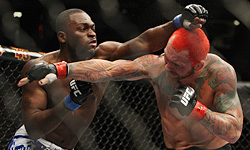 D. Mandel
Leben was no match for Brunson.
Takedowns and a suffocating top game carried Strikeforce import Derek Brunson to a unanimous decision over Chris Leben in a middleweight showcase. All three cageside judges scored it the same: 29-28 for Brunson (10-2, 1-0 UFC) -- a late substitution for the injured Karlos Vemola.

Brunson, a three-time NCAA All-American wrestler for the University of North Carolina at Pembroke, struck for takedowns in all three rounds. He did his best work in the first frame, where he grounded Leben, threatened the 32-year-old Portland, Ore., native with an arm-triangle
choke and eventually moved to mount.

Both men slowed considerably over the final 10 minutes, though Brunson managed to battle through fatigue for much-needed takedowns. Leben (22-9, 12-8 UFC) tried but failed to finish the fight late, his lethal left hook left in its holster for much of the match.