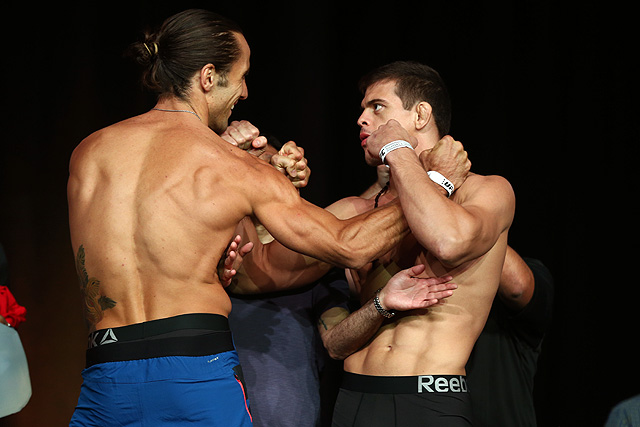 Magalhaes, a Brazilian jiu-jitsu black belt, tapped to a rear-naked choke from Samman 2:52 into the opening frame of their July 12 clash at the MGM Grand Garden Arena in Las Vegas. It was the first time Magalhaes had been finished in 11 professional fights.

After the bout was stopped, Samman attempted to shake hands with his defeated foe, but Magalhaes responded by spitting blood at his opponent. The 27-year-old known as “Hellboy” will face further disciplinary action at a future hearing.

As previously reported, both Rousimar Palhares and Jake Shields also received temporary suspensions from the NAC. Palhares submitted Shields with a kimura in the third round of their World Series of Fighting 22 bout at the Planet Hollywood Resort and Casino in Las Vegas on Aug. 1. Palhares failed to release the hold in a timely manner, and after the two combatants were finally separated, Shields express his displeasure by throwing a punch at the Brazilian. Like Magalhaes, both men will face a potential fine and suspension at a later hearing.