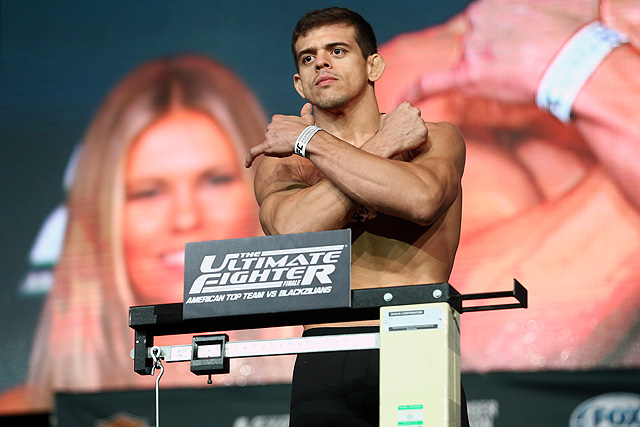 
Caio Magalhaes was suspended six months by the Nevada Athletic Commission for splitting blood at Josh Samman after their bout at "The Ultimate Fighter 21" finale finale.

In addition to the suspension, which is retroactive to the event, “Hellboy” must also perform 40 hours of community service. The ruling was passed during a Thursday NAC hearing.

The Brazilian jiu-jitsu black belt tapped to a rear-naked choke from Samman 2:52 into the opening frame of their July 12 encounter. After the contest was halted, Samman offered to shake hands with his defeated foe, but Magalhaes responded by spitting blood at him.

Magalhaes apologized for his actions during Thursday’s hearing and even claimed that he patched things up with Samman over dinner. Samman, however, denied that such a meeting occurred via Twitter.

The Brazilian middleweight also revealed that he lost money fighting Samman. Magalhaes, who earned a $20,000 purse that night, said that the UFC did not cover the cost of his flight from Brazil to the United States. Instead, the promotion only paid for his travel from Denver to Las Vegas.

The loss to Samman ended a four-fight winning streak for Magalhaes, who finished three of those triumphs inside the distance. Magalahes is 4-2 in the UFC and 9-2 as a professional overall.