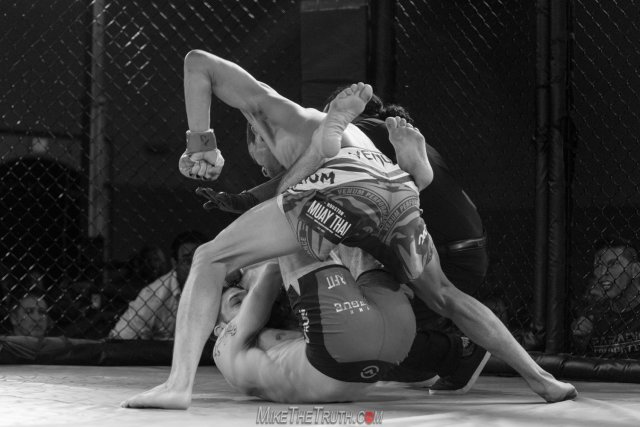 
On Friday night, it took less than two minutes for the man who calls himself “Camelot” to snatch the Fury Fighting Championship crown.

In the main event of Fury FC 35, Cameron Graves stepped into the cage to challenge Colin Wright for the 145-pound belt Wright won in January. After a couple of awkward early exchanges between the southpaw Graves and orthodox Wright, Graves put the champion on his seat with a right straight. Wright sprang back up immediately, but was dropped again seconds later, this time with a left. Graves swarmed with standing-to-ground punches until the referee pulled him off of Wright, awarding him the TKO victory at 1:52 of the first round. With the win, the 25-year old Graves claims the Fury FC featherweight belt and moves to 8-3 in a career contested entirely within Fury and Legacy Fighting Alliance.


Returning to the cage for the first time in nearly two years, Charlie Ontiveros (10-6) showed no signs whatsoever of ring rust, blasting Derrick Ageday with a monstrous flying knee in the first round of their welterweight co-main event. Ontiveros employed his rangy, kick-heavy striking game from the start, and was largely able to elude Ageday’s takedown attempts. A little under two minutes in, Ontiveros timed an Ageday level change and met him with a jumping knee strike that resounded through the Humble Civic Center with an audible pop. Ageday was out cold instantly and went down stiff as a board; no follow-up strikes needed. Ontiveros picks up the knockout win at 1:50, and at only 28 years of age despite the long layoff, he has plenty of prospects in the Fury 170-pound division.


In a matchup of lightweight prospects, Isai Cabrera turned away Christopher Miller-Cox in a grueling three-round affair. While both men had their moments of success, Cabrera’s suffocating pressure against the cage and opportune takedowns carried the day. In the end, the judges awarded the 27-year old Gracie Barra Houston product a unanimous decision via 30-27, 30-27 and 29-28 scores. Cabrera moves to 2-1 in his young career, while Miller, whose pro debut in January was contested at a 160-pound catchweight, falls to 0-2.


In one of the more impressive performances of the evening, Alonso Sanchez manhandled Casey Jones in a featherweight affair contested largely on the ground. Sanchez struck for takedowns and took Jones’ back in all three rounds and from there the Presa BJJ brown belt set up shop, locking in a body triangle from back mount for several long stretches and threatening with a variety of chokes. Jones was game throughout, but looked to be in survival mode for much of the bout. Sanchez was sufficiently dominant that he picked up a 30-26 scorecard along with two 30-27s. At 25 years old and with a 3-0 record -- after an amateur career in which he went 9-1 -- Sanchez is a 145-pound prospect to keep on the radar.


Flyweight prospect Alden Coria, making his highly-anticipated professional debut after going 5-0 in the Fury FC and LFA amateur divisions, showed off some well-schooled grappling on the way to a rare shoulder choke submission. Against Brandon Pate, Coria slipped while throwing a kick and Pate pounced, grabbing a guillotine choke. Pate released the choke as Coria moved to side control but moments later, he looped his far arm over Coria’s head once more. Coria promptly trapped the arm by locking his hands underneath Pate and applied pressure to finish the choke. Pate was left no option but to tap out at 1:07 of the first round.


On the all-amateur preliminary card, Jacob Bradley Williams won the Fury FC amateur heavyweight title via unanimous decision in a grueling five-round slugfest with Forrest Mudge; Gabriel Echaverry won the Fury FC amateur featherweight title with a unanimous decision over Darius Gray; Oscar Martinez edged out Taylor Hickman via split decision in a grappling-heavy lightweight scrap; bantamweight Cameron Smotherman spoiled the MMA debut of three-time NAGA grappling champ Nathaniel Fay, busting him up with punches at 1:40 of Round 2; Carlos Montemayor tapped out Cristian Lopez via armbar at 1:26 of the second round of their featherweight bout; Francisco Obando caught Hugo Zuniga with a slick kneebar at 1:36 of Round 2 of their 130-pound catchweight fight; and in the only women’s bout of the evening, bantamweight Brianna Winfrey moved to 2-0, muscling Difernt Caldwell all over the cage on the way to a unanimous decision.