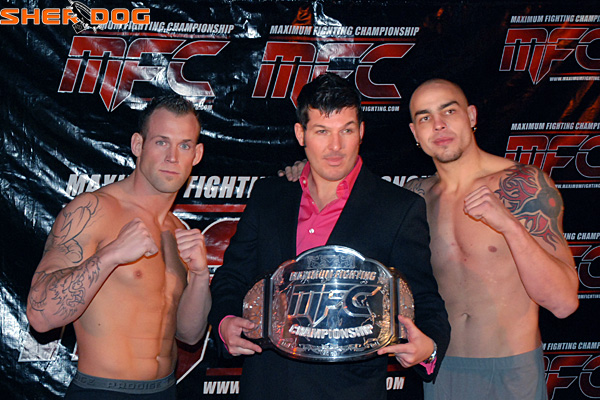 Maximum Fighting Championship officials announced Tuesday that title challengers will no longer be penalized if champions fail to make weight prior to their defenses. Additionally, the Canadian promotion revealed that the Edmonton Combative Sports Commission (ECSC) will begin random fighter drug testing starting Oct. 26 at MFC 35.

“The commission will select up to six fighters from the entire card, and those fighters must provide a urine sample in the locker room after their bout,” an official release stated. “The MFC and the fighters’ representatives will be notified of those results. If a winning fighter posts positive test results, the win on his record will be officially changed to a no-contest. The commission, not the MFC, is responsible for determining any suspension and/or fine.”

A new policy concerning weigh-ins for championship bouts was also announced, as title fights will no longer be changed to non-title contests if one fighter fails to make weight.

Under the new criteria, if the champion comes in heavy but the challenger hits his mark, the champion must immediately vacate the title, but the bout remains a five-round contest. Provided the champion wins the bout, MFC officials reserve the right to consider him the No. 1 contender and book his next fight for the vacant belt, which could be an immediate rematch. If the challenger wins, he becomes the new MFC titlist, despite the reigning champion’s inability to make weight.

As in the past, if the challenger misses at the scale, the champion retains his belt and the bout is changed to a non-title affair. The promotion reserves the right to decide whether the bout will take place over three or five rounds. Similar stipulations have been put in place for vacant title fights, as the promotion recently saw a vacant lightweight championship affair between Mukai Maromo and Adam Lynn at MFC 34 changed to a non-title bout after Lynn failed to make weight. Maromo stopped Lynn in the second round on Aug. 10 but was not awarded the title belt due to Lynn's misstep at the weigh-ins.

“This new criteria is a way for the fighter who made weight to continue in his quest for the title belt and not be punished for doing everything he was supposed to,” said MFC President Mark Pavelich in the official release. “It’s important to our organization, our fighters and our fans that title fights happen with as much excitement as possible, and I hope this endeavor goes a long way as a fail-safe.”

The promotion also announced plans to lobby the ECSC to allow fighters a second opportunity to weigh in within a two-hour window. Currently, fighters are only given one chance to make their contracted weights. Currently, a fighter who misses weight on his first attempt is penalized with a 20 percent purse deduction. Under the proposed plan, if the fighter is still unable to make weight within the allotted two hours, an additional purse penalty of 10 percent would be administered for a total of 30 percent. All purse deductions are given to the opponent who made weight.