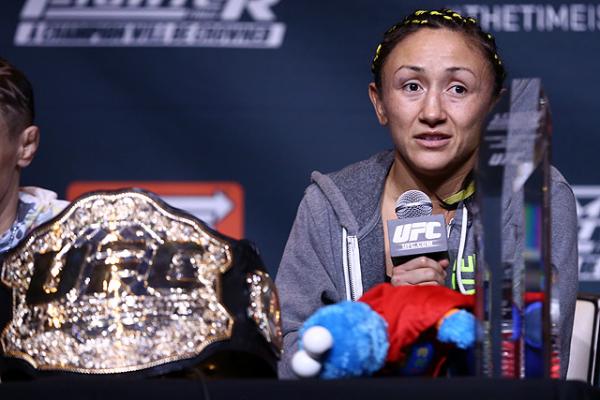 While Rose Namajunas entered "The Ultimate Fighter 20" finale finale as the UFC’s next big star-in-waiting, it was Esparza who walked away with the promotion’s inaugural strawweight belt at the Palms Casino resort in Las Vegas on Friday night.

“It feels like a dream,” Esparza told Fox Sports 1. “I never thought this moment was going to come.”

The former Invicta FC 115-pound queen made her way through the “TUF 20” bracket with triumphs over Angela Hill, Tecia Torres and Jessica Penne. Despite Esparza’s status as the tournament’s No. 1 seed, it was Namajunas’ all-out aggression and penchant for the spectacular that was garnering buzz by season’s end.

Esparza changed all that with a performance that got better as the bout progressed. After a competitive first frame, “Cookie Monster” asserted herself in round two, as she took Namajunas down and hammered away from full mount.

That dominance continued into round three. Esparza landed another takedown within the first 20 seconds, took her opponent’s back and eventually locked in the fight-ending rear-naked choke 1:26 into the period.

In addition to landing five takedowns in the fight, Esparza also outlanded her foe 42 to 28 in significant strikes and 107 to 29 in total strikes.

“I really wanted to show the world that I’m an entertaining fighter,” Esparza said. “I’m a mixed martial artist, and I have all kinds of weapons.”

The effort also impressed UFC boss Dana White, who once claimed that “TUF 20” would produce another Ronda Rousey. That was supposed to Namajunas, but Esparza had other ideas.

“[Esparza] did a real good job closing the distance and standing with her,” White said. “She completely dominated on the ground and looked good on her feet.”

It has been an arduous journey to the top for 27-year-old Team Oyama representative, who has now won five straight fights as a professional.

“It was a lot of ups and downs,” she said. “The show was tough, the camp was tough and this title fight was tough, but I came home with the gold, so that was all that matters.”

According to White, it was just another example that the “TUF” process works.

“It was a great season. It was very unique,” White said. “I say it all the time: The best rise to the top in ‘The Ultimate Fighter.’”