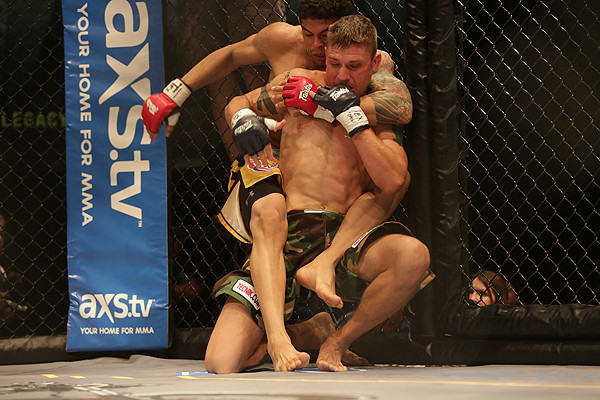 Ferreira put on a commanding performance against the more experienced fighter to earn a unanimous decision triumph. Although Prater scored the first takedown, he chose not to stay on the ground with Ferreira, but delivered kicks to his legs until Ferreira caught one and used it to bring himself back up. Prater tried to take Ferreira's back, but Ferreira moved around and applied several rear-naked choke attempts, though Prater was able to avoid being submitted.

In the second round, Ferreira showcased his versatility with crowd-pleasing roundhouse kicks and an impressive judo throw. Ferreira dominated the third round as well, with takedowns, takedown defense, and impressive standup. In the end, all three judges scored the fight 30-27 for Ferreira, who improved to 7-0 as a professional. Prater, a veteran of the UFC, WEC and Strikeforce promotions, falls to 31-14-1. Ferreira will get no rest, as he heads to California to compete at the Brazilian Jiu-Jitsu World Championships.

Jackson’s MMA product Damacio Page (16-8) scored his first victory since 2009 against Patrick Ybarra (5-1) in the evening’s co-headliner. After injuries and four consecutive losses -- his last three in the UFC -- Page came in hungry for the win.

Ybarra made first contact with a leg kick, but Page immediately responded with a barrage of combinations. Ybarra attempted several takedowns, but Page showed off his superior takedown defense, sprawling easily. After a couple of thudding body shots, Page threw a right hook that dropped Ybarra like a stone, giving him the win by knockout 1:57 into the first round.

Elsewhere, Chris Pecero (9-5) took home a technical knockout victory over Adam Schindler (10-5). The first round showed an even exchange of standup, with Schindler getting takedowns, but Pecero staying busy in his guard with triangle and armbar attempts.

In the second round, Pecero looked fresher, but Schindler was still delivering combos and attempting takedowns. However, Pecero managed to get a Thai clinch and landed a knee to the head of Schindler, followed by a clinch against the cage where he drove repeated knees into the thigh and knee of Schindler until referee Jacob Montalvo stopped the fight 1:02 into the second round.

Alp Ozkilic (8-1), known for his stint as wrestling coach for Dominick Cruz on “The Ultimate Fighter 15,” met Antonio Banuelos (20-10-1), a late replacement for Jimmy Flick in a flyweight clash. After a few minor exchanges, Ozkilic landed a left hook that Banuelos never saw coming, and it dropped him like a rock. When Ozkilic dropped down to finish him, referee Kerry Hatley waved him off, giving Ozkilic the win by TKO 30 seconds into the opening frame.

In the first main card bout, MTV “Caged” star Matt Schnell (2-1) lost a majority decision to Elias Garcia (4-0) at 125 pounds. Garcia dominated the first round with body-slamming takedowns, rear-naked choke attempts and several staggering right hooks, but Schnell finished the round on Garcia's back, attempting his own rear-naked choke.

The second round started with more of Garcia's audible right hooks, but Schnell got a takedown early, and spent the rest of the round on Garcia's back, alternating between hammerfists and choke attempts. At one point, Garcia stood up with Schnell on his back and dropped to the mat a couple times, trying to dislodge his opponent’s body lock. The tactic was unsuccessful, however.

Garcia delivered multiple staggering combinations, and remained in dominant positions throughout the third round, dropping unanswered double hammerfists. He then suffered a low blow from Schnell, but was able to stand after less than a minute. It seemed as though Schnell won the first two rounds, but the judges scored the bout 28-28, 29-28, 30-27 in favor of Garcia.