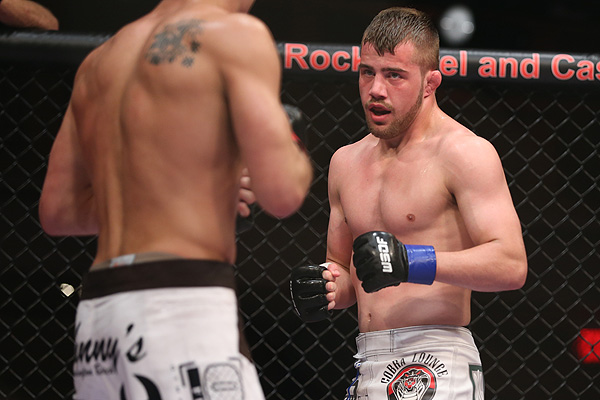 Wrestling runs in Carson Beebe’s family, but fighting does too.

The younger brother of WEC veteran Chase Beebe squares off against Marlon Moraes on Saturday in a bantamweight bout at World Series of Fighting 6, which streams live on Sherdog.com. Ahead of the contest, Beebe joined the Sherdog Radio Network’s “Beatdown” show and discussed why he quit wrestling, his brothers and more.

On wrestling: “That was just kind of the lifestyle in my family when we were growing up. It was just wrestling practice every night and wrestling tournaments every weekend. That’s just kind of how we grew as a family. That’s how we bonded.”

On his brothers: “In my house I didn’t have any shortage of workout partners. All my brothers are about the same size. It goes back to iron sharpens iron and one brother sharpens another. That’s what we did when we were growing up -- we just made each other better. One brother competed and raised the bar for the next one, and it’s continuing now in our professional careers.”

On who’s the toughest in his family: “I’ve definitely taken the most beatings. If that’s what makes a guy tough, then I think I’d be leading in that category.”

On when he quit wrestling in college: “It was kind of a big shock to my friends and my family just because they all knew how committed I was and how disciplined I was when it came to wrestling. I had a lot of goals in the sport, but I just really felt like what I really wanted to do was fight. I felt like I was just waiting for my wrestling career to be over so I could get in the cage and start fighting. I finally decided, why wait? Why not go after what I really want to do? That’s what I did. It’s been awesome ever since.”

On which is harder, wrestling or MMA: “I’ve talked with a lot of guys who are pretty high-level MMA fighters that were high-level wrestlers as well … and I always ask these guys, ‘What do you think is harder, MMA or college-level wrestling?’ Everyone has the same answer. Wrestling’s harder. It’s kind of crazy and maybe hard for some people to believe out there, but I’d say wrestling’s harder than MMA even and it definitely prepares you for the sport. … I think the training aspect of wrestling is harder, but the competing aspect of MMA is definitely harder. You’re not getting punched in the face when you’re wrestling, but I think … it’s just a constant grind and it’s just mentally tough, physically tough.”

On Moraes: “He’s a really good standup fighter, but who knows? He may come out and try to take me down. You never know what’s going to happen when you get in the cage. You never know what that guy’s doing. You just kind of focus on what you’re good at and what you can do.”

Listen to the full interview (beginning at 9:54).