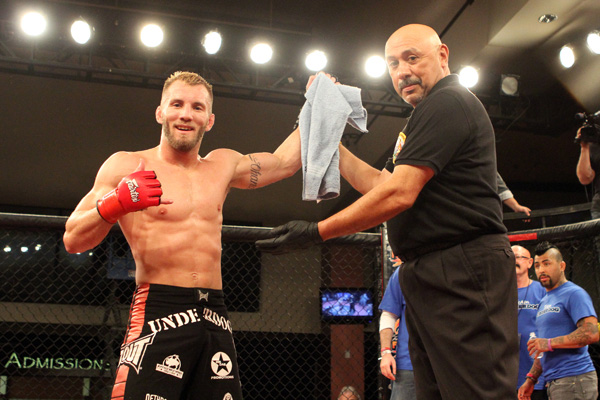 Local favorite Casey Olson put his wrestling skills on display in the main event, as he outpointed an aggressive Cody Gibson in a barn burner on Friday at the Tachi Palace Hotel and Casino. All three judges scored it 30-27 for Olson.

Olson came out with his hands up and stymied his opponent’s striking game. Gibson could not find his range and repeatedly closed the distance to clinch and look for a takedown. That strategy played right into Olson’s strengths. The Fresno, Calif., native dominated the position game and never let Gibson get his offense going. After two rounds, it became clear Gibson had to shift gears, and he came out like a wild man in the third, swinging wildly as Olson went to touch gloves.

Gibson jumped around and attacked with reckless abandon, but Olson answered with two huge slams and more smothering top control, earning a unanimous verdict from the judges. Olson will face Francisco Rivera for the TPF bantamweight championship on May 10. 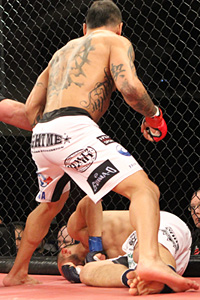 Jeff Sherwood
Rivera destroyed Duarte.
Rivera destroyed Antonio Duarte in just 75 seconds. Looking to counter, Rivera seemed to land heavy shots every time he threw his hands. He connected with a thudding right hand that left Duarte seated against the cage, then rushed in with a follow-up right that knocked him cold 1:15 into round one.

Meanwhile, 2011 NCAA national wrestling champion Bubba Jenkins barely broke a sweat in defeating an outmatched Chris Gomez, as he scored the rear-naked choke submission 2:07 into the first round.

Jenkins, who trains out of American Top Team, grounded Gomez immediately and pressed him against the face. Before long, referee Marcos Rosales separated the fighters and admonished Jenkins for grabbing the fence. After the restart, Jenkins shot in for a takedown behind a wild hook, took Gomez’s back and landed punishing blows to the head. When Rosales elected not to halt the bout, Jenkins switched to the choke for the finish. 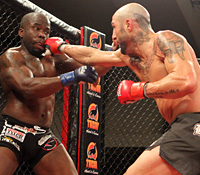 J. Sherwood
An overweight Emerson beat Young.
Though he failed to make weight for his debut at 145 pounds, “The Ultimate Fighter” Season 5 alum Robert Emerson outdueled Savant Young before he submitted him with a rear-naked choke in the third round.

Emerson hurt “The Black Superman” early but found himself wrapped in a clinch and unable to capitalize. The action remained on the feet through the second round, as both men landed decent shots but could not find the necessary opening to do meaningful damage. Late in round three, Emerson took down Young and transitioned to mount. As Young rolled to try and escape, the UFC veteran landed the fight-ending choke. The tapout came 4:29 into the third round.

“I haven’t fought in a year,” Emerson said. “I felt a little rusty, but it’s good to be back.”

Elsewhere, the heavyweights did not disappoint, as Dave Huckaba knocked out Liron Wilson a little more than a minute into the second round of their exciting slugfest.

Wilson looked good early, as he took the fight to the ground and worked for a kimura. However, Huckaba escaped halfway through the first round, with Wilson visibly gassed. Huckaba did not rush in but stayed calm and picked his shots, stunning his fatigued opponent a few times. In the second stanza, Huckaba turned up the heat, as he rattled Wilson on the feet and followed him to the ground for the finish 1:05 into round two.

Anthony Avila made quick work of Art Becerra with a guillotine choke, securing the submission 4:08 into round one. Becerra came out to strike and cut Avila on the forehead early. However, when Becerra jumped for a guillotine, Avila capitalized and took a dominant position. He snatched a guillotine of his own during a scramble, and Becerra tapped almost immediately.

Finally, Alex Perez delivered a first-round submission win over Edgar Diaz. He took top position early, slowly locked in the fight-ending kimura and forced the tapout 2:33 into round one.