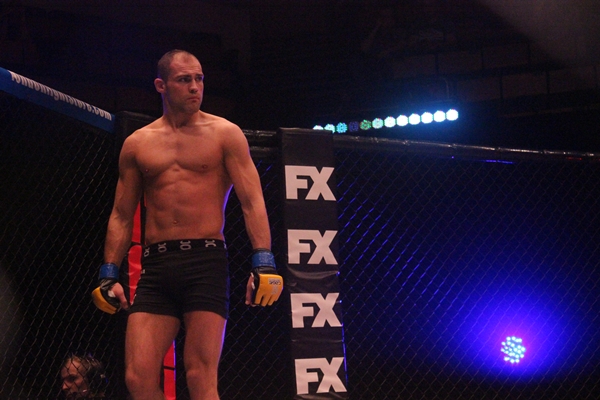 Unlike many people in his line of work, Cathal Pendred seems to be comfortable leaving his fights in the hands of the judges.

The Irishman improved to 7-0 in bouts that go the distance on Saturday, taking a five-round verdict from Gael Grimaud in the Cage Warriors Fighting Championship 52 main event at the HMV Forum in North London, England. Judges Ben Cartlidge and Dean Weir scored the 170-pound title tilt 49-46 in favor of Pendred, while Andy Sledge submitted a 48-47 scorecard in favor of the Dublin native. In addition to becoming the promotion’s new welterweight champion, Pendred also ended Grimaud’s eight-fight winning streak.

“I feel on top of the world. Hard work, dedication and sacrifice pays off. This is the proof of that,” Pendred said, nodding toward his newly earned belt after the bout.

Consistent pressure, aggression and cage control carried the day for Pendred, who improved to 5-0 in CWFC bouts. The SBG Ireland product was able to impose his will by repeatedly pressing Grimaud against the fence, where he proved adept at creating just enough space to land short but effective strikes.

The Frenchman appeared to find his range with right hands and high kicks in round two, snapping Pendred’s head back with strikes on a couple occasions. While Grimaud’s offense dwindled as the conflict entered the championship frames, Pendred continued to move forward. The 25-year-old scored takedowns in rounds four and five and was the more active fighter throughout the final 10 minutes.

“I knew I could do that. I've been trying to get this fight for a while,” Pendred said. “I knew I could beat him like that. I felt like I had more in me.”

In the co-main event, relentless ground-and-pound carried Graham Turner to a first-round technical knockout victory over Fouad Mesdari in a 145-pound clash. The fight was stopped at the 3:05 mark of round one after Mesdari absorbed a barrage of unanswered strikes on the ground.

Mesdari attacked aggressively on the feet, but “Afterburner” was able to land a takedown and move into full mount with little resistance from his opponent. The MK Legion member tried desperately to escape as Turner pummeled him with punches and elbows from above, but the best he could do was surrender his back before allowing his foe to return to full mount to finish the fight.

A black belt in judo and Brazilian jiu-jitsu, Carvalho experienced little difficulty in dictating the action in tie-ups and on the floor. The Brazilian landed powerful knees against the fence and persistently hunted for submissions in the first frame, finishing the round on his opponent’s back. The second stanza brought more of the same, as Carvalho quickly closed the distance and worked to take the English fighter’s back. Once in back mount, Carvalho alternated left and right hands to the head of Dinsdale until the bout was stopped.

Jack Mason won for the sixth time in his last seven appearances, defeating Matt Inman via technical knockout in a welterweight scrap. The end came 4:26 into the second frame, when a vicious ground-and-pound assault from “The Stone” forced referee Rich Mitchell to call a halt to the bout.

Mason landed a takedown almost immediately and proceeded to grind Inman down for the majority of the opening frame. The Tsunami Gym representative survived a harrowing moment in round two when Inman appeared to have a triangle choke tightly secured from his back. Once Mason was able to escape he took no more chances, hurting his foe with a pair of vicious elbows from guard before clinching his victory with a flurry of punches.

Paul McVeigh outhustled and outgrappled Paul Marin to take a hard-earned unanimous decision victory in a 128-pound catch-weight affair. Judges Ben Cartlidge and Andy Sledge scored it 30-27 in favor of McVeigh, while Dean Weir had it 29-28 for the Dinky Ninjas representative.

The majority of the bout was a chess match on the ground, with McVeigh able to gain the upper hand in a number of high energy scrambles. Marin, a Greco-Roman specialist, was able to consistently explode out of bad positions and land some heavy shots from above. McVeigh managed to control the tempo and win enough positional battles to get the nod from the judges, however.

In the evening’s first featured bout, Ireland native Alan Philpott stopped Englishman Liam James with strikes on the ground 3:00 into the third round of their bantamweight encounter. It was the first technical knockout victory in the 11-bout career of Philpott, who had earned his previous seven triumphs via submission.

James controlled much of the opening frame from top position, though his opponent’s active guard prevented him from landing any strikes of consequence. Philpott picked up the pace over the final 10 minutes, scoring multiple takedowns and achieving full mount on more than one occasion. Philpott nearly finished the contest in with a flurry of strikes on the ground in round two, but James was able to survive the assault. The Irishman finished the job in the final stanza, pounding his opponent with unimpeded shots from back mount for the stoppage.

In preliminary action: Chris Fishgold tapped Steve O’Keeffe with a guillotine choke at the 1:34 mark of round one; Martin McDonough submitted Alex Enlund with an armbar 3:13 into the opening frame at bantamweight; Paul Redmond battered Alexei Roberts with elbows and punches on the mat 4:30 into round two of a lightweight tussle; Brad Wheeler trapped Merv Mulholland with a mounted triangle and pounded away with punches to earn a TKO 1:46 into the first round at 155 pounds; Dan Hope took a split decision (29-28, 29-28, 28-29) over Gary Kono at welterweight; Ben Hajir submitted Anthony Ferguson with an armbar 1:42 into round one at flyweight; Richard Griffin choked out Shahid Hussain 4:40 into the first period; and Shajidul Haque captured a unanimous verdict over Oliver Battell (30-26, 29-28, 29-27).