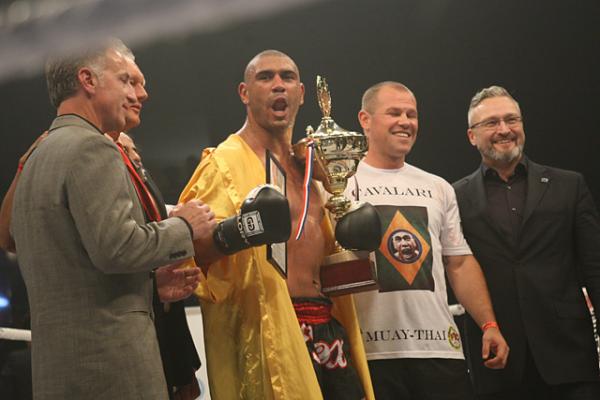 Saulo Cavalari won it all at Glory 18. | Photo: Keith Mills/Sherdog.com


SHAWNEE, Okla. -- At Glory 18, things looked grim for Saulo Cavalari to start, but it turns out he was just saving his best for last.

Cavalari defeated Zack Mwekassa via knockout at 0:20 of the third round to win the Glory light heavyweight contender tournament. The win, coupled with an earlier win over Danyo Ilunga, moved his record 30-18-3. 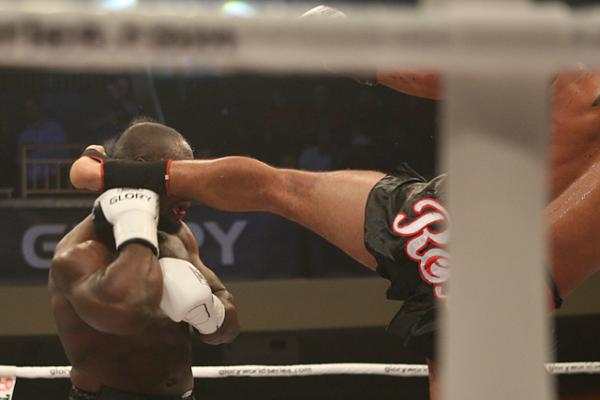 (+ Enlarge) | Photo: K. Mills/Sherdog.com
Cavalari ended the fight with this kick.
Mwekassa was having his way with the Curitiba native in the first round, teeing off on the retreating Cavalari. “The Black Warrior” then landed a right hand that clearly wobbled Cavalari, but he was able to clinch up and survive the stanza.

In the second frame, Cavalari began moving deftly to avoid Mwekassa, picking his shots instead of standing toe-to-toe with his foe. The strategy paid off and he was able to turn the tide in the period. Once the third round began, he didn’t need much time to score the biggest knockout of his career. Just 20 seconds into the round, he threw a right head-kick that landed flush, ending the fight. 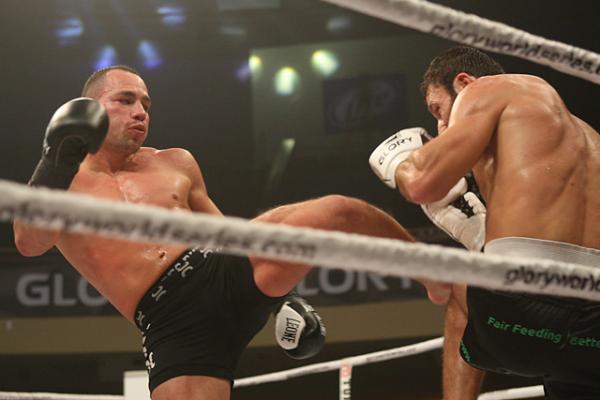 (+ Enlarge) | Photo: K. Mills/Sherdog.com
Van Roosmalen did enough to edge Kiria.
Robin van Roosmalen survived a scary third round to secure gold, defeating Glory lightweight champion Davit Kiria via majority decision (48-46, 48-46, 47-47). Though Kiria had van Roosmalen on wobbly legs in the third round, van Roosmalen showed the resolve of a champion, recovering in the fourth and fifth periods to cruise to his third victory over Kiria. 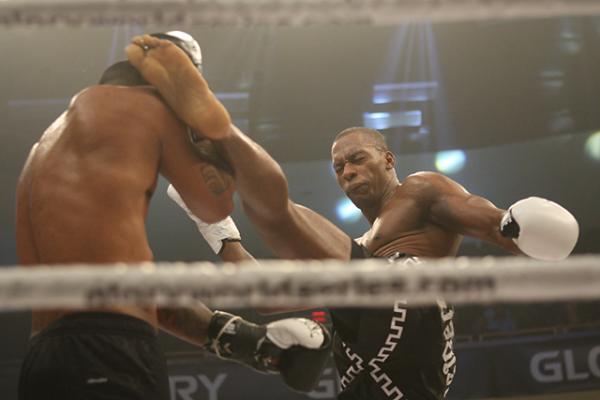 (+ Enlarge) | Photo: K. Mills/Sherdog.com
Wilnis earned a tough one over Barrett.
Wilnis landed solid body shots throughout the fight and a big right hook at the end of the first round turned the bout squarely in his favor. After cruising through the second round, Barrett surged forward in the third, landing a few strong counter uppercuts. He looked like he had Wilnis hurt but ultimately, he could not amount enough offense to finish the fight. With the win, Wilnis moved to 23-4-1.

Cavalari was never in danger against Ilunga and as his opponent tired in the second round, Cavalari simply turned up the heat. His combinations were too quick for Ilunga and he smartly clinched whenever Ilunga began generating meaningful offense 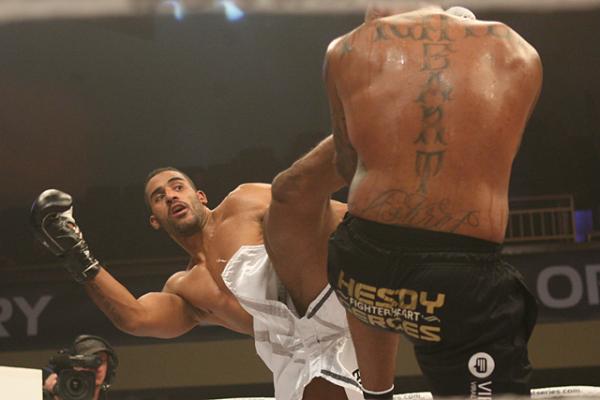 (+ Enlarge) | Photo: K. Mills/Sherdog.com
Adegbuyi decisioned Gerges.
The second bout of the lightweight tournament began with some fireworks as Mwekassa followed up on his win over Pat Barry with a vicious knockout win over Brian Collette at 0:45 of round two. The win cemented Mwekassa’s reputation as a knockout artist and further secured him a spot in the light heavyweight contender tournament final later in the night.

Benjamin Adegbuyi earned a well-fought unanimous decision victory over Hesdy Gerges in the final bout on the undercard. Both fighters engaged in a back and forth affair in which both looked tired yet managed to find a second win.

The big men threw big punches but neither was able to land the one knockout blow. The win moved Adegbuyi’s record to 22-2-1.

In other action, Randy Blake cruised his way to a unanimous decision win over Warren Thompson, notching three 30-26 scorecards in the process; Robert Thomas came back to defeat Mike Lemaire, losing the first round but ultimately knocking Lemaire out with two right hooks at 1:06 of round three; Josh Jauncy showed off his incredible speed, outpointing Jae-Gil Noh for two rounds before putting the South Korean down for good at 1:14 of round two; In the first bout of the night, Omari Boyd cruised to a TKO victory over Ian Alexander at 2:17 of the third round. Boyd was never in danger in the fight and the finish came as culmination of his dominance.
« Previous Kickboxing: Glory 18 ‘Return to Glory’ Results and Updates Next Legacy Fighting Championship Releases Promotional Video for Inaugural Kickboxing Event »