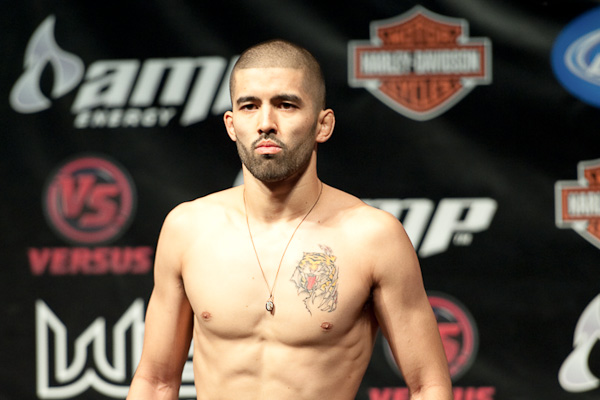 After earning the biggest victory of his career in the Jackson's MMA Series 9 headliner at the Tingley Coliseum on Saturday night, Cerda is glad he did. Although things didn’t look promising early for the relatively unknown, 22-year-old bantamweight, his willingness to take a chance ultimately paid off, as he earned a surprising technical knockout victory when Gomez suffered an eye injury late in the first round. After Gomez [pictured] was ruled unable to continue by a cageside physician, referee Richard Espinoza called a halt to the contest 4:26 into the first round.

“I wanted it a different way, but a win’s a win,” Cerda said after the bout. Gomez, meanwhile, has lost three consecutive fights.

Things began well for Gomez, as the 26-year-old New Mexican successfully executed a takedown and began landing elbows from top position early in the first round. However, it was Cerda’s work from the bottom that proved to be the difference.

“He took me down and right after that he moved his head to the side, and I caught him with an elbow, Cerda said. “I saw the blood but I didn’t realize exactly how bad it was until I saw his head. Then I was like, ‘Damn.’”

The long-term consequences of the strike could be worse than just the visible cut and swelling around Gomez’s left eye. Trainer Greg Jackson informed Sherdog.com that his fighter was unable to see after the bout was stopped. The extent of the damage to Gomez’s eye was unknown immediately after the fight.

With two triumphs in as many Jackson’s MMA Series appearances, 3 Crosses BJJ product Nate Patterson knew what it was like to experience success against one of the most respected camps in the world. In the co-main event, rising prospect Hunter Tucker made sure that Patterson’s third time in the Jackson’s MMA Series cage wasn’t nearly as charmed, submitting the Las Cruces, N.M., native with a rear-naked choke in the second round of their featherweight conflict.

“There was a lot of added pressure this fight, with him kind of being the Jackson’s killer, “said Tucker, who improved to 4-0 with the victory. “I feel like it was a big step up for me. I grew up a lot this fight, and I’m gonna take it and keep building.”

Tucker’s game plan was quickly apparent, as the 26-year-old closed the distance for a takedown almost immediately. Much of the opening round was contested on the feet, however, with both fighters exchanging leg kicks and punches. Though neither man appeared to gain an advantage during the exchanges, Tucker initiated much of the action and in the process accomplished one of his pre-fight goals.

“I pride myself on being well rounded, and I knew that he was primarily a standup fighter,” Tucker said. “I wanted to put him where he didn’t want to be, and I felt like that was on his back. But I also wanted to put fear in him on the feet, so I was just trying to mix it up everywhere.”

Round two saw Tucker impose his will on the mat. A leg kick followed by a superman punch set up another takedown, and Tucker peppered his adversary with short punches before moving to full mount. Shortly thereafter, Patterson surrendered his back, giving Tucker all the opening he needed to secure the fight-ending submission. The end came at the 3:32 mark of round two.

“Once I got on top of him the second time, he kind of broke. I felt like he was really tired by that point, so I just wanted to take my time and really punish him,” Tucker said.

It was a battle of positioning between Gonzales and Gene Perez in their flyweight bout, with the Jackson’s member doggedly pursuing the takedown throughout. Perez was game enough, battling to his feet on two different occasions before winding up in top position.

Gonzales didn’t stay on his back long, however, as he quickly transitioned to an armbar. With nowhere to go, Perez had no choice but to tap 1:49 into the opening stanza.

Using deliberate clinch work and tenacious ground-and-pound, Peters-Kagan outworked Lynae Lovato to earn a unanimous decision triumph [30-27, 30-27, 29-28] in their 125-pound scrap. The Jackson’s MMA product forced Lovato against the cage in the opening frame before dragging her opponent to the canvas. From there, Peters-Kagan punished her foe with shoulder strikes and elbows, posturing up and gradually increasing the intensity of her attacks as the round expired.

She continued to assert herself in the second period, dropping Lovato with a left hand and following up with more ground-and-pound. The third round was more competitive, but a final salvo of punches from Lovato –one of which wobbled Peters-Kagan – proved to be too late to sway the judges.

Gutierrez wasted little time in taking the fight to Adam Knowles, as he backed his foe up against the cage with a punches at the outset of the bout. From there, Gutierrez fired off a series of knees, the last of which dropped Knowles to the canvas. Just 22 seconds in, Knowles asked out of the fight before Gutierrez could land another strike.

The card began with six amateur bouts: Jackson’s MMA export Andrew Tenneson stopped Albuquerque, N.M.’s Greg Chavez with punches from mount at 1:37 of the second period, while Norma Center – also of Jackson’s -- elicited a tapout from Colorado Springs, Colo.’s Abby Higginbotham at the 2:49 mark of round two in a 125-pound affair.

Eric Dodson, the younger brother of UFC flyweight talent John “The Magician” Dodson, made his amateur debut a memorable one, knocking out Bushido product Fernie Garcia at the 1:20 mark of round one at bantamweight. To begin the night, El Paso, Texas, native Alida Gray punctuated a spectacular spinning back fist with an armbar submission of Jackson’s MMA product Lorna Johnson at 2:43 of the opening frame in a 115-pound contest.