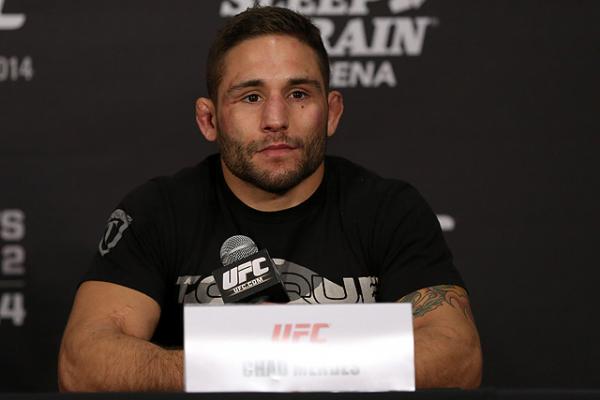 Listen to Monday's Chad Mendes interview in the player above.


Chad Mendes was set to fight Jose Aldo in the main event of the ill-fated UFC 176 pay-per-view on Aug. 2, but the fight and event were subsequently canceled when Aldo withdrew due to a neck injury.

During a Monday appearance on the Sherdog Radio Network’s ”Beatdown” show, “Money” weighed in on what he really thought caused the fight to be postponed. MMA has had issues of late with fighters testing positive for performance enhancing drugs, and Mendes believes Aldo is no exception.


Advertisement
“I feel like this happens to me a lot, like I have a curse or something. It sucks,” Mendes said. “I definitely do [think Aldo’s using PEDs]. This is something that's been ongoing, but for him to all of a sudden just drop out -- I mean he drops out of a lot of fights -- but I think it’s pretty coincidental.”

“I’d probably say at least 80 percent of fighters are probably taking something,” Mendes said. “You know, there’s guys that are coming back from injury trying to take it. Whether it’s them trying to survive, pay their mortgage, pay rent or whatever -- or guys just trying to get that full advantage to be at the top. So yeah, I think there’s a lot of people taking performance enhancing drugs.”

With time the system will be refined, but the Team Alpha Male product worries about how such rules will apply to international fighters like Aldo.

“I like it [random drug testing]. The only thing I question about the system is what do we do about guys that are out of the country? Guys in Brazil, guys in Japan, can we trust those random drug tests?” Mendes said. “I was thinking about this the other day: If someone were to knock on Aldo’s door in Brazil and say, ‘We need to give you a random drug test,’ and he says ‘Here’s $1,000, go away,’ it’s done. I feel like something like that could happen very easily. I just want to know what the system would be -- how could we trust that it’s going to be fair everywhere?”

Following the news that their rematch would be postponed, the featherweight champion accused Mendes of using “supplements” to avoid injuries. Mendes seemed pleased on Monday that he is affecting Aldo as much as he is.

“The first time I saw that, for me, this is huge in my mind. He’s reaching big time. We have never seen Aldo lash out like this; we’ve never seen him lose his temper. I am in his head. I own him right now,” he said.

“This is huge for me. This is huge for me getting in there and taking that belt from him. I’ve never seen him talk like this about anybody. He’s being very disrespectful,” Mendes continued. “I’ve never been caught red-handed or anything. It’s funny to me that as soon as the whole random drug testing started popping up, the next day he is injured and out of the fight. If anything, I could throw that in his face, but whatever.”

So where will the fight ultimately end up taking place? Both sides obviously want the bout to go down on home soil, but according to Mendes, Aldo’s push for the fight to be in Brazil – like their first encounter at UFC 142 -- stems from something else.

“So this is the thing: We’ve got all this random drug testing, all this stuff that’s going on, testing for EPO, HGH, all this stuff now -- they can get away with that stuff over in Brazil. This is why he wants me to be in Brazil and fighting in Brazil, [because] they can do all that kind of stuff there. For me, I want this to be a fair fight. I went there first; I fought him in his backyard. I think it’s only fair he comes here and fights me in my backyard. Let’s make it one and one and see what happens,” Mendes said. “We are still working on it. I talked to [UFC matchmaker Sean Shelby] a little bit. It’s a 50/50 percent chance it could end up in Brazil. We are trying obviously to get it pushed here. We don’t know for sure.”

Only time will tell.