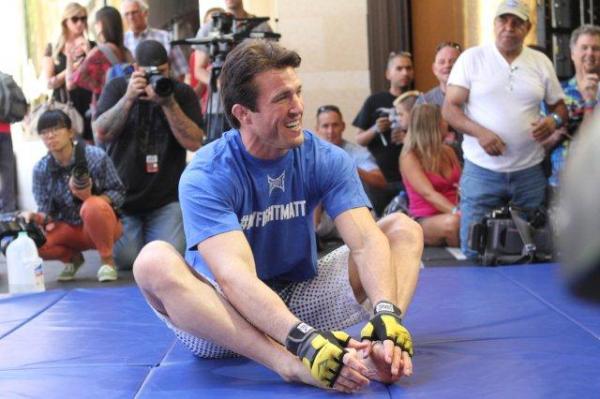 The Chael Sonnen who taunted Anderson Silva for the better part of two years has left the building, at least for the time being.

Previously channeling the role of unapologetic antagonist in the lead-up to his rematch with the middleweight champion at UFC 148, Sonnen finally gave “The Spider” his due after falling by technical knockout in Saturday night's main event at the MGM Grand Garden Arena in Las Vegas.

Sonnen had previously taken Silva to the brink of defeat in 2010 before he was submitted with a last-minute triangle choke at UFC 117. Sonnen appeared to once again be on the right track in the first round of the rematch, immediately taking Silva to the mat and gradually passing to half-guard. The Oregonian eventually slipped into mount, the dominant position in which he would end the frame.

Despite the fortuitous start, however, Sonnen would not escape the second round. After pressing Silva against the cage early, Sonnen whiffed on a spinning backfist that took him off balance and left him seated against the cage. With no hesitation, Silva planted a devastating knee directly into Sonnen's chest. Though the former Oregon Duck would manage to regain his vertical base, Silva sent him back to the mat shortly thereafter with a flurry of punches and continued to drop bombs until referee Yves Lavigne halted the bout.

Despite acquitting himself well in both meetings with Silva before making critical errors, Sonnen says he does not take any consolation from putting the champion in more trouble than anyone else has in Silva's six-year UFC career.

“It's pass or fail when you're in [the Octagon],” Sonnen said at the post-fight press conference. “You either get it done, or you don't. I was handed a lot of compliments after the first fight, and I'm going, 'Jeez, that's nice, but did you see who won the fight? I didn't win.' [Silva is] just a another regular guy. We weigh the same thing, and he finds a way to win. I admire it.”

Though some fans took offense to Sonnen's use of pro-wrestling inspired promos to hype Saturday's rematch, the results are tough to deny, as the UFC reportedly set a new live gate record in the United States. Though Sonnen stoked the coals of contempt from some fans for his words leading up to the contest, the middleweight appeared to bury the hatchet with Silva after the bout.

“That's the way you deal with combat,” Sonnen said of the post-fight handshake he shared with Silva. “You always leave it in the cage or on the mat. Those are the rules, and I follow them. That was great that he [shook my hand]. It was very nice of him.”

In addition to speaking highly of his opponent, Sonnen also applauded the dedication and support shown toward the champion by his fans in Brazil.

While it is unclear exactly where this loss leaves Sonnen, the middleweight contender says that he will always be gunning for another crack at winning the title.

“I really believe that if you're going to be in this company and take up a spot, then you've got to be chasing a championship,” said Sonnen. “There are plenty of young guys who could come in and get their opportunity. I got my chance, and then I got it again. I'm not going to ask for anything. I'm grateful for it, but I will not hang around for one day to blend in. It's either to be the world champ or I'll move on and do something else.”