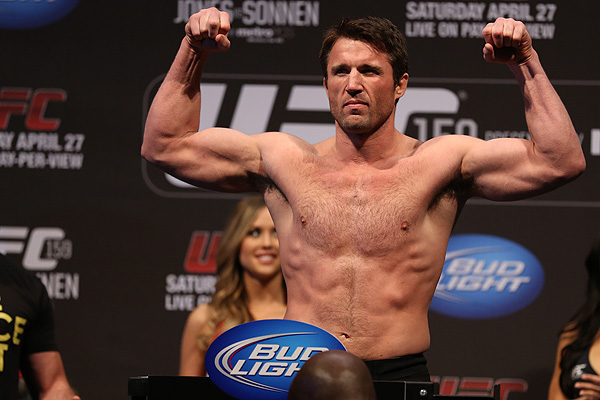 Who would win: Chael Sonnen or Wanderlei Silva? Please tell us below. | Photo: Dave Mandel/Sherdog.com

The two fighters had a brief confrontation Sept. 28 at the Mr. Olympia event in Las Vegas, and although they exchanged only words, the situation was close to becoming more serious, according to Sonnen.

“When Wanderlei does this, he needs to understand I don’t know him,” Sonnen told the Sherdog Radio Network’s “Rewind” show. “I don’t know if this is for show. I don’t know if he’s still hurt or healthy. I don’t know this guy. All I know is he’s yelling, he brought friends and now I feel threatened. That’s not a good spot to put a guy like me in.”

The video, which was posted on YouTube, followed Silva as he approached Sonnen and pointed a finger in his face. After sharing a few angry comments with each other, they were quickly separated.

“It’s very hard, in his defense, to stay in the media if you don’t have a fight coming up,” Sonnen said. “Well, he hasn’t fought since [March] and he’s not going to fight for a considerable amount of time, if ever again. So he hires his own camera. The guy has a camera follow him around and he goes and puts it on the Internet. All right, fair enough. I get it. He comes up to me and he’s yelling at me and he brings his own camera. So on one hand, you’re kind of going, ‘Aw, Wanderlei, really? You’re stooping to filming your own stuff? That’s just weird.’ On the other hand, he brings three guys with him.”

Sonnen and Silva have a history of trading words. They don’t like each other, and when Silva approached at the event, Sonnen said he just didn’t know the other man’s intentions.

“I’ve got a guy that calls himself an ‘Axe Murderer’ pointing a finger at me and he brought three buddies with him,” Sonnen explained. “That’s a problem where I come from. My father taught me the fight doesn’t start when somebody throws a punch. The fight starts as soon as the other guy squares up. Wanderlei squared up.”

“I don’t like street fighting,” he said. “I don’t like to hear about it. It’s unprofessional and I’m not advocating any of this. However, I will not let a guy within arm’s distance. Wanderlei, if his finger he was pointing touched me, I would have put him down right there. I would have had no choice. I must defend myself. And he had three friends -- these odds aren’t great for me. I want to take down as many of these scumbags as I can while I can.”

Violence wasn’t necessary, though, as Silva was ushered away. Sonnen said he was stunned the Brazilian let the video be posted on the Internet.

“You’re going to show that you had to build up this courage to come and mutter at a guy, with three friends?” Sonnen said. “… I think that was the most confusing thing, for me. If I was doing the publicity stunt, I’m going to go, ‘All right, guys, listen. That backfired. That thing goes in the fireplace.’”

Listen to the full interview (beginning at 23:37).