Guram Gugenishvili had to fight through a scare from challenger Maxim Grishin, but the Georgian prevailed and retained his M-1 Challenge heavyweight crown at Saturday’s M-1 Challenge 23.

The card’s other champion, welterweight titleholder Shamil Zavurov, also kept his belt at the Crocus City Hall in Moscow with a dominant second-round dispatching of American Tom Gallicchio.

Grishin, a sparring partner of Fedor Emelianenko, started out loose on his feet and knocked Gugenishvili down with a left jab. In the ensuing scramble, the champion found himself mounted and gave up his back, but the Russian could not capitalize on the position by securing a rear-naked choke. Once Gugenishvili reversed and returned to the standing position, the fight began to go the way most had envisioned.

Gugenishvili scored a takedown of his own after Grishin fell out of the ring trying to avoid it. The Russian tried to stand at first, but was sucked down to the mat every time, where Gugenishvili worked to pass his guard. The champion quickly advanced to mount and, in a deja vu moment, Grishin gave up his back. This time, however, the attacker did cinch up a rear-naked choke, forcing Grishin to tap at the 3:03 mark of round one. 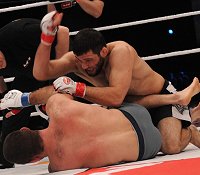 A. Taran
Zavurov pounded Gallicchio.
Zavurov took more time, but had little difficulty against 2010 M-1 Americas Selection winner Tom Gallicchio. The RusFighters Sport Club product took down the American and kept him on his back almost for the entirety of round one. Remaining rather careful with his ground-and-pound attack, Zavurov did manage to posture up for one solid flurry, but his progress was stifled by the inability to pass Gallicchio’s guard.

In lieu of a takedown in the second round, Zavurov cracked Gallicchio with a massive right hook that sent the New Jersey native crashing to the ground. While Gallicchio was not completely detached from consciousness, he was dazed to the point that he could not stop the follow-up punches of the Russian. Referee Marco Broersen stopped the fight 71 seconds into the round.

In non-title action, Rafal Moks was upset in his return to welterweight after relinquishing the M-1 middleweight title. Rashid Magomedov withstood no less than three leg lock attempts from Moks and eventually found a position from which he could effectively strike his Polish opponent. Moks survived a significant number of punches, but Magomedov never slowed down, and picked up a TKO victory at 2:06 as a result.

M-1 staple Yuri Ivlev lost two in a row for the first time in his career, as the “Cable Guy” was finished by Austria-based Chechen Mairbek Taisumov. Ivlev worked his preferred ground-and-pound in round one, but also suffered a nasty cut above his left eyebrow that the doctors closely inspected after the first stanza. The Russian got nonchalant in the second, and Taisumov capitalized on Ivlev’s lowered guard by rocking him with a right cross. The Chechen followed up with more punches, downing Ivlev and finishing him off for the TKO win 94 seconds into the second frame.

Magomed Sultanakhmedov punched his ticket to an M-1 middleweight title fight with a victory over Brazilian Plinio Cruz. The “White Wolf” looked to have a significant strength advantage, methodically beating down Cruz on the floor before unleashing some 20 unanswered punches to force a stoppage at 1:11 of round two.

In the evening’s most controversial bout, German Daniel Weichel earned a technical submission of Magomedrasul Khasbulaev. Referee Mika Sinkkonen stopped the fight as Khasbulaev struggled to defend Weichel’s triangle choke in the fourth minute of round one. The Russian, who neither tapped nor went to sleep, was so livid with the stoppage that he stood in his corner even as Sinkkonen motioned him to the center of the ring for the official decision. 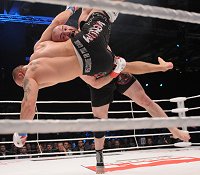 A. Taran
Ismailov slammed Bulakhtin
early and often.
American Top Team Orlando’s Byron Byrd succumbed to a second-round arm-triangle choke from Igor Savelyev after an otherwise evenly matched affair. Byrd repeatedly charged in with wild strikes, allowing Savelyev to score takedowns in both rounds, but the American once managed to reverse and get some punches through. Round two saw Byrd swinging for the knockout, this time lacking the stamina to execute a sweep as he tapped out at the 2:12 mark.

After taking a heavy beating on the feet, Poland’s Tomasz Narkun emerged victorious over Shamil Tinagadjiev in a fight of recent Vyacheslav Vasilevsky victims. Tinagadjiev looked dominant in the standup portion, but the battered Narkun still had the awareness to secure a fight-winning triangle choke at 3:31 of the first round.

Heavyweight action saw Arsen Abdulkerimov quickly defeat 300-plus pound Goncalo Salgado of Portugal. Abdulkerimov cracked his man with an uppercut-left hook combo and then secured an armbar from mount for the submission victory just 2:29 into the bout.

On the undercard, two fighters picked up wins in their professional MMA debuts. Light heavyweight Magomed Ismailov dazzled with his wrestling skills -- including a German suplex and a high-altitude slam -- in his second-round rear-naked choking of the vastly more experienced Maxim Bulakhtin.

Lightweight Nikolai Kaushansky finished his own takedown-to-mount-to-back control sequence with a rear-naked choke submission of Vusal Bairamov in just 91 seconds.