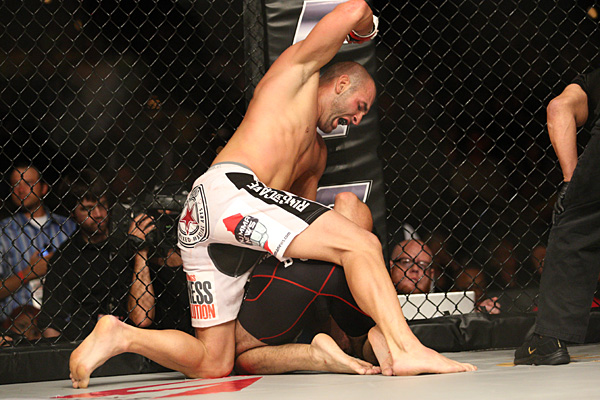 
ATLANTIC CITY, N.J. -- The 26th edition of Cage Fury Fighting Championships will be known as much for a tussle that never took place as it will be for the main event.

Saturday night’s card at Borgata Hotel and Casino was supposed to feature two title fights, including one between UFC vet Charlie Brenneman and Ronnie Rogers for the vacant CFFC lightweight belt.

Brenneman was initially slated to take on Kyle Baker, but the “Alley Cat” pulled out of the bout due to injury three weeks prior. Though CFFC was able to fill the spot with late replacement Rogers, the recent Bellator competitor had a rough weight cut in the weeks leading up to the fight. Rogers made weight at 155.5 pounds during Friday’s weigh-in, but an overnight stint in the hospital for Rogers ultimately to the bout’s cancelation.

“Six years into my career and not a thing has changed,” Brenneman tweeted Saturday morning after the news broke. “Fight is off tonight. Oh the sport of MMA.”

“It’s unfortunately something I’ve had to deal with multiple times in my career. Part of being a ‘professional’ fighter,” Brenneman told Sherdog.com later that evening.

“We appreciate Ronnie Rogers taking the fight on short notice,” stated CFFC General Manager Arias Garcia. “Unfortunately, although he made weight, he had a bad weight cut and had to be taken to the hospital and was in no shape to fight. Unfortunately for Charlie and the fans, we lost a chance to see a title fight.”

“It’s an embarrassment. You’re a professional fighter and you need to do a better job making weight,” said CFFC welterweight champ George Sullivan. “You’re messing with someone’s livelihood. In my opinion, if you don’t make weight, you should be suspended for six months.”

The title fight that did go down featured Sullivan defending his 170-pound strap against Jesus Martinez. Sullivan was composed and deliberate at the start of the bout, afterward stating that he is not a “first-round fighter.” The champion dropped the opening round 10-9 on Sherdog.com’s unofficial scorecard, but Sullivan came out in the second round highlighting the skills which have made him successful during his title reign. Martinez tries valiantly to defend the more aggressive Sullivan, but an early takedown and heavy ground-and-pound forced referee Gasper Oliver to call a stop to the bout at the 3:12 mark.

The co-main event of the evening was at middleweight, as Mike Stewart took on newly signed Duane Bastress. Through the first two rounds, Bastress put on a clinic against Stewart, moving in and out of range with well-timed shots. In the third, the Central PA MMA product put Stewart down with a head kick and ended it with a follow-up flurry 33 seconds in. 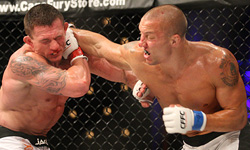 The “Burmese Python,” Aung La Nsang, notched his fourth straight submission win after a rear-naked choke victory over “Chocolate Thunder,” Shedrick Goodridge. The stoppage came at 1:44 of the second frame.

In featherweight action, Renzo Gracie product Jordan Stiner remained undefeated, securing a rear-naked choke submission over Donald Ooton at 4:26 of the second round.

Brylan Van Artsdalen found out that a kneebar can be as dangerous for the man applying it as it is for the man defending it. After a failed submission attempt from Van Artsdalen, fellow Bellator vet Lester Caslow seized an opportunity for a guillotine choke and earned a submission win at 3:55 of round one.

The first submission of the evening came from AMA Fight Club’s Mike Medrano, who trapped a shooting Mike Santiago in a guillotine and got the tap 31 seconds after the opening bell.

A sneaky left hand from George Sheppard put down Pellegrino MMA product Derrick Kennington in their lightweight bout, and the flurry that followed forced referee Oliver to stop the bout after 1:46.

Peter Cole stopped his bout against Andrew Aguilar in the first round after opening up a cut on Aguilar’s eyebrow which forced a doctor stoppage.