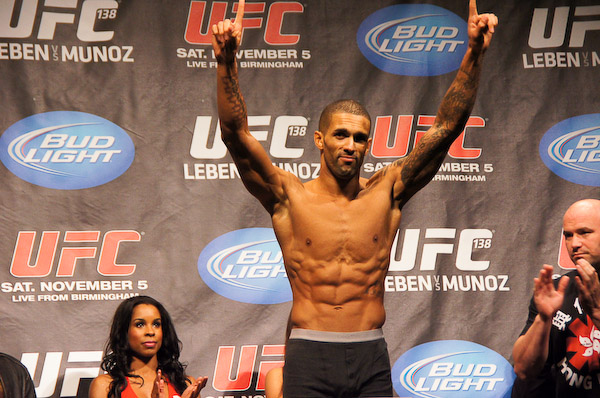 UFC welterweight Che Mills announced Tuesday that he will square off with Duane Ludwig on Sept. 29 in Nottingham, England.

Mills revealed the booking on his official Twitter account this morning. The UFC’s upcoming visit to the United Kingdom is expected to serve as UFC on Fuel TV 5 and will be headlined by a heavyweight confrontation between Stefan Struve and Stipe Miocic. The event takes place at the Capital FM Arena and will also feature a bantamweight showdown pitting Brad Pickett against Yves Jabouin, as well as a featherweight conflict featuring “Ultimate Fighter” alumni Andy Ogle and Akira Corassani.

Mills, 29, impressed in his Octagon debut last November by knocking out “TUF 13” veteran Chris Cope in 40 seconds at UFC 138. His next outing would end less favorably, however, as Mills was dominated by rising Canadian prospect Rory MacDonald on April 21 at UFC 145. Prior to that second-round technical knockout loss, “Beautiful” had won five straight fights, collecting victories under the M-1 Challenge and BAMMA banners before joining the UFC.

Ludwig also suffered a setback in his most recent outing, catching a crisp left hook from Dan Hardy that led to a first-round knockout at UFC 146 last month. The defeat marked the second loss for “Bang” this year, as the 33-year-old was also put to sleep with a guillotine choke courtesy of Josh Neer on Jan. 20. The 12-year pro has gone 2-4 in his most recent run with the Las Vegas-based promotion, earning wins over Nick Osipczak and Amir Sadollah prior to his recent two-fight skid.