Kongo dissected the Australian kickboxer with power punches, takedowns and ground-and-pound en route to a unanimous decision in the Bellator MMA Season 9 heavyweight tournament final at Bellator 107 on Friday at the Winstar World Casino in Thackerville, Okla. All three judges arrived at the same verdict: 30-27 for Kongo (20-8-2, 2-0 Bellator), who walked away with a $100,000 prize and the right to challenge for the heavyweight championship currently under Alexander Volkov’s control.

Graham (9-6, 1-1 Bellator), who replaced the injured Vinicius Kappke de Queiroz, was a non-factor outside of the occasional counter right hand. Kongo pecked away with jabs and worked the body with kicks, slowly sapping his adversary of strength. The Frenchman picked up his pace in round two, where he mixed in knees from the Thai plum and his first takedown.

By the time the third round began, Graham was a spent force. Kongo struck for multiple takedowns, moved to full mount and targeted a small cut near the Aussie’s left eye, opening a gnarly gash on his eyebrow with a brutal elbow from the top. Graham sprang a brief reversal, but Kongo answered and wound up back in top position, dropping punches and elbows until the final horn sounded.

“I really spent a quick time and short hours to prepare for this fight,” Kongo said, “and I’m really glad to give you the best for the final.” 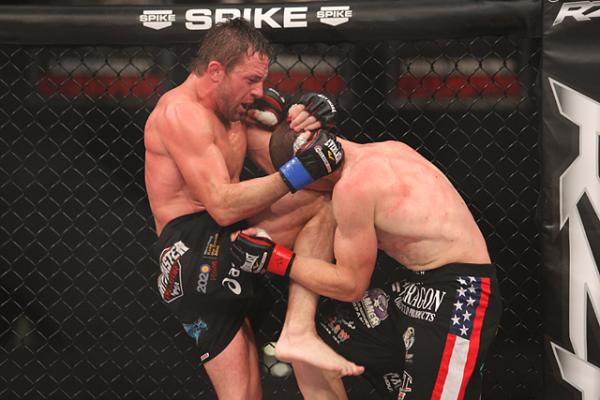 Photo: K. Mills/Sherdog.com
Warren ended it with a well-placed knee.
Joe Warren joined Pat Curran as the only fighters to win Bellator tournaments in multiple weight classes, as he leveled Travis Marx with a second-round knee strike from the clinch in the Season 9 bantamweight final. Warren (10-3, 8-2 Bellator) closed it out 1:56 into round two, landing another six-figure payday and a crack at the Bellator bantamweight championship currently around the waist of Eduardo Dantas.

Marx (21-5, 3-2 Bellator) was never a factor in the fight. Warren neutralized him with takedowns and a relentless top game.

In the second round, the self-proclaimed “Baddest Man on the Planet” caught the Thai plum during a scramble and unloaded on Marx. The knee folded the Roosevelt, Utah, native where he stood, and Warren finished it with follow-up punches on the ground.

“I’m extremely proud of myself,” Warren said. “The baddest man is back, and he’s looking to battle. Our game plan was to stay focused, move left and keep our hands up. I tried to stay a little calmer this fight. He dropped his head, and I dropped the hammer with the knee. He went down crying. I felt bad. I like Travis a lot.” 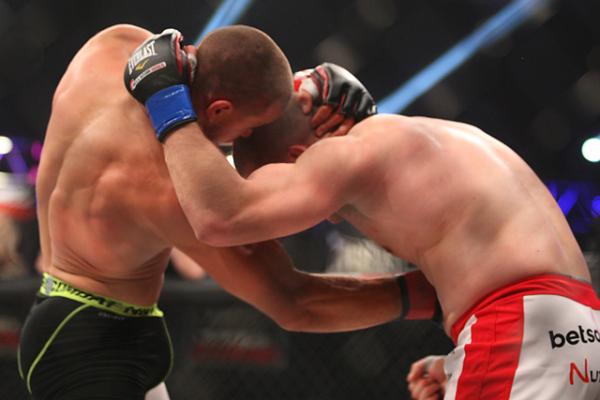 Photo: K. Mills/Sherdog.com
Ward took it to Parlo in round two.
Brennan Ward put away Danish import Mikkel Parlo with second-round punches in the Bellator Season 9 middleweight tournament final. Ward (9-1, 5-1 Bellator) finished it 1:39 into round two, securing a six-figure payday and a shot at the middleweight crown currently held by Alexander Shlemenko.

Parlo (11-2, 3-2) was effective throughout the first round, utilizing a stout jab, airtight takedown defense and a grinding clinch game. However, a straight left hand floored the 23-year-old early in round two and marked the beginning of the end for the former Royal Arena champion.

Ward pounced, tore into him with a wicked barrage of body blows and polished him off with power punches against the fence. Parlo never went down, but his failure to answer the onslaught led referee Kerry Hatley to intervene on his behalf.

“I popped him with a good jab,” Ward said. “I didn’t want to get too crazy on him and lose the good position, but it was a good second round. He hit me with a couple of nice shots behind the ear. He was a tough kid, but I’m happy I got the win.” 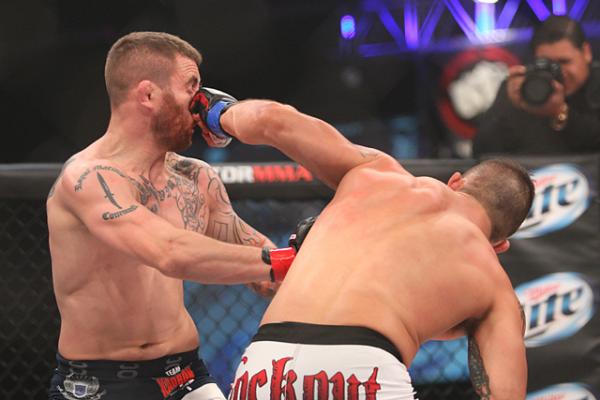 Stapleton (12-3, 0-2 Bellator) was routinely beaten to the punch. Campos staggered him with a left hook inside the first 30 seconds and secured takedowns in all three rounds. He put the finishing touches on his fourth straight victory with a strong third frame, where he grounded Stapleton, moved into full mount and pounded
away with a late flurry of punches. 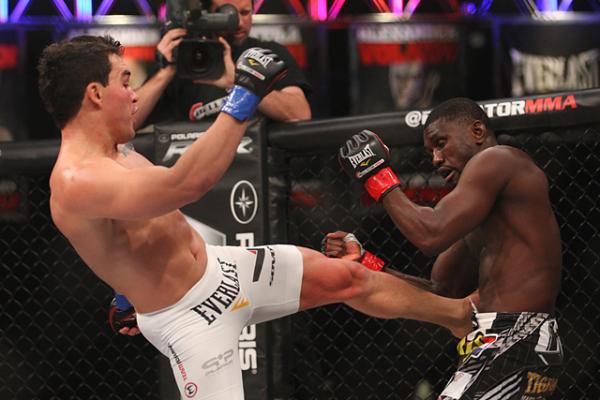 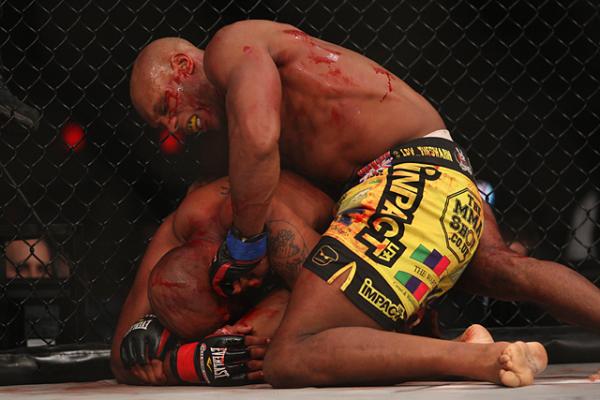 Photo: Keith Mills/Sherdog.com
Vassell blew Jones out on the floor.
Bellator) into verbal submission with a series of knees and follow-up punches 2:14 into the first round of their heavyweight clash; and English newcomer Linton Vassell (12-3, 1-0 Bellator) cruised to a lopsided unanimous decision over Matt Jones (4-6, 0-2 Bellator) in their light heavyweight scrap, sweeping the scorecards by 30-27, 30-26 and 30-26 counts.