Cheick Kongo chewed on former Bellator MMA heavyweight champion Alexander Volkov for 15 minutes, as he rolled to a one-sided unanimous decision in the Bellator 139 headliner on Friday at the Kansas Star Arena in Mulvane, Kan. All three cageside judges arrived at the same verdict: 30-27 for Kongo (23-10-2, 5-2 Bellator), who has won eight of his past 12 bouts.

Volkov (24-6, 6-3 Bellator) had nothing to offer. Kongo struck for takedowns in all three rounds and proceeded to feed the 6-foot-7 Russian a steady diet of elbows, short punches, forearm strikes and hammerfists. Slashing elbows were the Frenchman’s most effective weapons, and one of them opened a cut near Volkov’s hairline in the first round. Kongo, 40, spent almost the entire second and third frames in top position, working his ground-and-pound and avoiding the occasional submission attempt.

The 26-year-old Volkov has suffered back-to-back defeats for the first time in his 30-fight career. 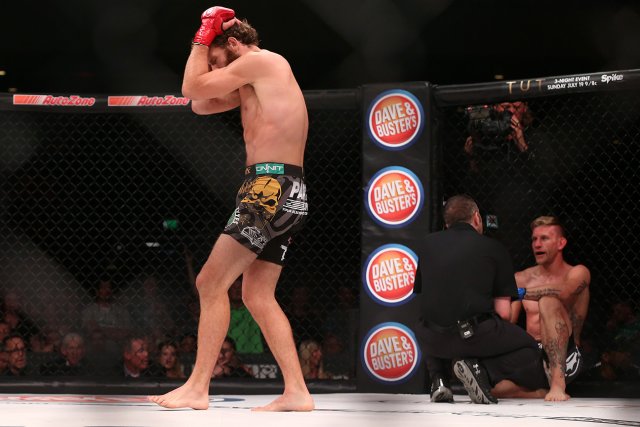 (+ Enlarge) | Photo: D. Mandel/Sherdog.com
Rickels gaffed when he was just a split
second from a knockout victory.
The lightweight co-main event between David Rickels and John Alessio ended in a no-contest 2:24 into the first round. Rickels (16-3, 10-3 Bellator) delivered an unintentional illegal knee with the Canadian kneeling at the base of the cage, leading to an anticlimactic finish.

Before the stoppage, Rickels was in complete control. He doubled over Alessio (35-17, 1-1 Bellator) with a crushing knee to the body and then swarmed with punches and knees. After a brief pause, Rickels resumed his onslaught and drove the former King of the Cage and Tachi Palace Fights champion to the mat with a knee to the head. He was perhaps a punch or two away from the finish when he uncorked the errant knee to the side of Alessio’s head. An extended delay ensued before the Xtreme Couture Mixed Martial Arts rep informed the referee he could not continue.


Promotional newcomer Hisaki Kato knocked out Joe Schilling with a second-round Superman punch in a featured battle at 185 pounds. Schilling (2-5, 1-2 Bellator) bounced off the canvas unconscious 34 seconds into round two, the sudden violence whipping the crowd into a frenzy.

Kato (5-1, 1-0 Bellator) made the most of his introduction to the American MMA audience. The Japanese upstart took down Schilling in the first round and controlled him there for the better part of four minutes, climbing to full mount in the closing seconds. Not long after the start of round two, Kato backed Schilling towards the cage, left his feet and detonated a left hand on the kickboxer’s jaw. With that, he had authored one of the year’s best knockouts. 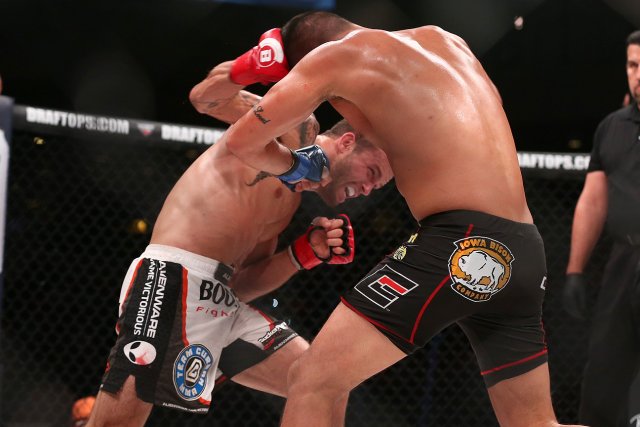 (+ Enlarge) | Photo: D. Mandel/Sherdog.com
Curran stayed a step ahead of Sanchez
Efficient standup, productive counterstriking and timely takedowns carried two-time Bellator champion Pat Curran to a unanimous decision over Emmanuel Sanchez in a three-round featherweight showcase. Curran (21-7, 11-4 Bellator) swept the scorecards with 30-27s across the board, as he snapped a two-fight losing streak and got back in track in a division he twice ruled.

The 27-year-old Curran kept the Roufusport prospect guessing with a variety of punches and kicks. He found the mark with numerous right hands, snuck in the occasional jab and exploded with multi-strike bursts in close quarters. Curran executed a pair of takedowns in the second round and again in third, where he advanced to his counterpart’s back and fished for a potential choke. Sanchez (10-2, 2-1 Bellator) escaped to his feet in the waning moments and fired off some punches and knees, but the fight had long been lost. 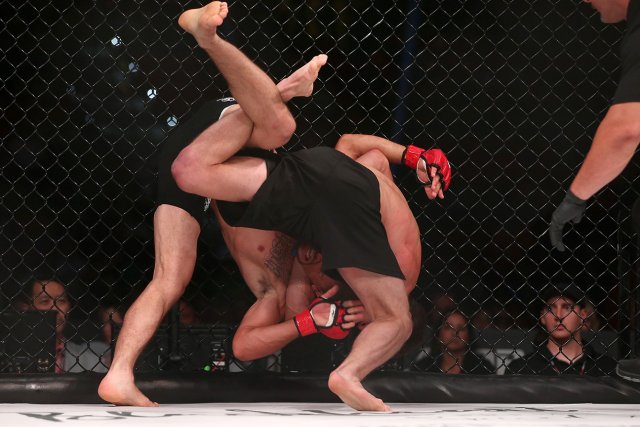