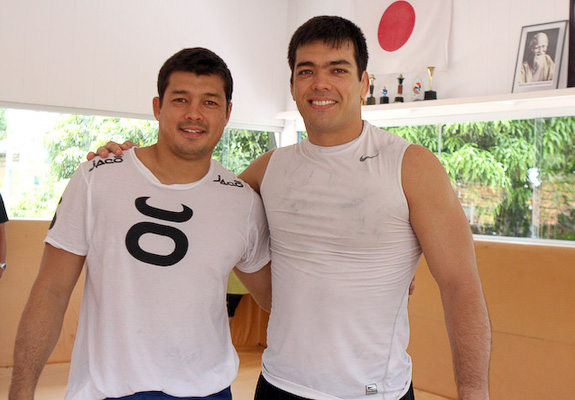 Lyoto has climbed to the sport’s highest peak over the course of six years in the Ultimate Fighting Championship, while the elder Machida has seen injuries derail his plans, resulting in a 1-2 professional record since beginning his career in 2005.

On Friday, the 36-year-old will step into the cage against Brian Wood at Resurrection Fighting Alliance 11 at 1stBank Center in Broomfield, Colo. The event airs live on AXS TV and marks Machida’s first appearance since dropping a unanimous decision to Leonardo Laiola in December 2010.

According to Machida, the long layoff did not come by choice. The karateka shattered a bone in his hand against Laiola and went on to fight two more rounds in spite of the injury. Unfortunately, the featherweight did more damage than good that night and has since undergone two surgeries that he believes have returned his hand to full strength.

Now, the karate black belt will make what sounds like one final run at his ultimate goal of fighting alongside his younger brother in the UFC.

“I would like to eventually get [to the UFC],” Machida told Sherdog.com this week. “I would like to have four or five fights in RFA and assess where I am at, but of course I’d love to fight in the UFC.”

Standing in his way is Wood, a muay Thai practitioner who no doubt hopes to bolster his reputation at the expense of Machida. Although Wood was not the opponent Machida originally signed to face in his RFA debut, the featherweight nevertheless feels confident in his preparation.

“My camps start out the same, and I make the final adjustments about 30 days before the fight. When I found out who my new opponent at RFA 11 would be, it was about a month and a half before the fight, so it didn’t really affect me too much,” said Machida. “I did general training -- a little bit of everything in the beginning -- and I saved the specifics for the last month, so I am ready to go.”

With his camp now behind him, Machida hopes to employ an aggressive approach and let his fists fly.

“I would like to keep the fight standing, because that is what the fans like to see, but I am prepared to take the fight anywhere. I’ve been doing a ton of wrestling and lots of jiu-jitsu, but I think standing up is a good way for the fight to go.”

If Machida finds the success for which he is looking, it may result in a shift of protocol between him and his brother. While the siblings have always participated in each other’s fight preparations under the guidance of father Yoshizo Machida and their team at Black House Gym in Los Angeles, this dynamic could change depending on how the elder Machida performs in the cage.

“He is still Lyoto’s coach, too, but first and foremost we need to see how he does Friday night,” manager Ed Soares said. “Hopefully he does well. If he does do well and feels like he wants to continue to do this -- the RFA is going to be doing 12 shows next year. I could easily see Chinzo fighting three or four times as long as the schedule permits with Lyoto’s fights.”

But what if their schedules clash, preventing the lighter Machida from getting the work required to fight inside the Octagon?

“Of course, if [Chinzo] had the opportunity, he would follow his own career,” Soares added.

The UFC’s featherweight division is widely regarded as one of the strongest, if not the deepest division within the company. Though Machida hopes to one day become a member of the UFC roster, the featherweight declined to compare himself to the promotion’s stable of 145-pound talents.

“I’m not really in a position to say, because training is one thing and fighting is another,” said Machida. “I would like to wait until after Friday night. I have been away from the cage for such a long time, so I will see how things go and [then] make that assessment.”