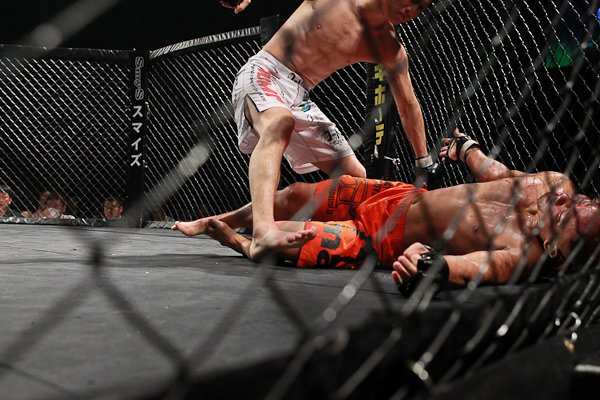 “Obiya was stronger than I'd anticipated, but I still got to implement my game, so it turned out well,” said Choi post-fight. “Obiya put on stronger pressure than I'd expected, but I kept calm so I could overcome it and perform well. I watched a lot of video on him before the fight and knew how to adjust on the ground and on the feet.”

Ostensibly placed in the main event slot largely for his back-and-forth two-round war with Toshikazu Iseno in last year's Deep Cage Impact, there was a subtle expectation that Obiya would replicate last year's frenetic pace against the Korean import.

It quickly became clear, however, that a brawl was the furthest thing from Obiya's mind, as his game was largely comprised of taking the fight down to stifle Choi on the ground. Choi defended well by marking Obiya up with sharp counter punches, dropping Obiya midway through the bout with a particularly hard punch to the forehead.

Choi found the key to his eventual victory in the second period with his thudding right low kicks, which Obiya apparently had little defense against. With Obiya worrying about his bruised leg heading into the third round, it opened up the perfect opportunity for Choi to launch a picture-perfect flying knee when the former Deep champ least expected it. Keith Mills
Choi went airborne.
Stiff but rubbery, the Japanese fighter careened backward into the cage, prompting referee Samio Kimura to dive for the stop at 0:55 of the third round.

Chonan took Samukawa down against the fence where he mashed him with crushing elbows. “The Piranha” also threw in stomps and soccer kicks for good measure, but Samukawa blocked most of those attacks. Keith Mills
Chonan rocked on top.
While taking a dominant round one and two this way, Chonan dispensed with this winning formula due to fatigue. Although turning the tables in the final round, it was too little too late for Samukawa as judges Akira Shoji, Kenichi Serizawa, and Yoshinori Umeki all voted Chonan the victor, moving him to 20-12 in his MMA career.

Hiroshi Nakamura added another quality scalp to his collection, taking a gritty decision over WEC veteran and former featherweight King of Pancrase Yoshiro Maeda in their bantamweight tilt. Rather than indulging the WEC vet in his typical high-flying, high-octane brawl, Nakamura pushed for takedowns: a tactic that helped him protect his chin, known to be shakier than Maeda's. While he was successful getting it down half of the time, he nonetheless controlled and punished Maeda against the cage for much of the first two periods, grinding him out with short punches when the opportunity arose.

Maeda took the third period with wily potshots on the feet, but neither man finished, thus allowing judges Serizawa and Kimura to turn in two cards for Nakamura, now 13-5-4; lone dissenting judge Shimada ruled for a draw.

Elsewhere, Deep welterweight champion Yuya Shirai took a unanimous decision over Yoshitomo Watanabe in a non-title affair. Though Watanabe was outmatched, he had his few shining moments, taking Shirai down to land punches from side control followed by a lone soccer kick in either round. Regardless, Shirai dished out the lion's share of damage and took the nod. Keith Mills
Nakamura (right) had a leg up
on Maeda.
Following the ruling, Shirai called out Sengoku veteran Taisuke Okuno as the next challenger to his welterweight crown. Okuno entered the cage and accepted for an unspecified future Deep event.

In another non-title bout, Deep light heavyweight champion Yoshiyuki Nakanishi trounced Yusuke Masuda, stopping him early in the second round.

Nakanishi dropped countless punches and knees to the head and body of Masuda. The champ finished the drubbing in the second frame, punting his foe's temples with soccer kicks when a desperate Masuda dove for the legs. Referee Shoji jumped in for the save at the 33-second mark.

One of Japan's few light-heavyweights and a man who holds a victory over current Bellator light-heavyweight champ Christian M'Pumbu, Nakanishi told Sherdog.com, "I'd definitely want to fight in Bellator at 205 [given M'Pumbu's success]. Any fight abroad I'd also love to do." Shunsuke Inoue made quick work of Japanese television personality-turned-fighter Bernard Ackah, who did not expect an early spinning back fist from his Japanese opponent. The surprise attack hit him across the face, sending him into the cage, where Inoue finished him, dropping punches from mount until referee Yoshinori Umeki pried him off at the 1:30 mark. Keith Mills
Shirai had happy feet, too.
Injecting some much needed excitement, Ken Hasegawa and Seigo Mizuguchi had a bloody, crowd-pleasing heavyweight “Megaton” bout. By the final bell, Mizuguchi was such a gory mess that the front rows at cageside all had specks of blood on them. Naturally, the judges all had cards for Hasegawa.

Yuki Niimura stomped Shuji Morikawa to an early stop in the first round of their light heavyweight bout. After chucking Morikawa to the mat from the body lock, Niimura wildly punched, soccer kicked and stomped away until referee Samio Kimura dove for the save at 1:45 of the first round.

In a 207-pound bout, Hirohide Fujinuma's many takedown attempts saw him ride out a lackluster top-decision victory over Atsushi Yamada, while middleweight Yusuke Sakashita took a similarly ho-hum majority victory over Hiroki Sato by pushing him up against the cage and pursuing takedowns.

In the opening bouts, 129-pounders Masato Kobayashi and Takashige Hirukawa whiffed at air en route to a majority draw, while featherweight Munehiro Kin grounded out Wataru Sasaki with punches over two rounds to take the unanimous decision.