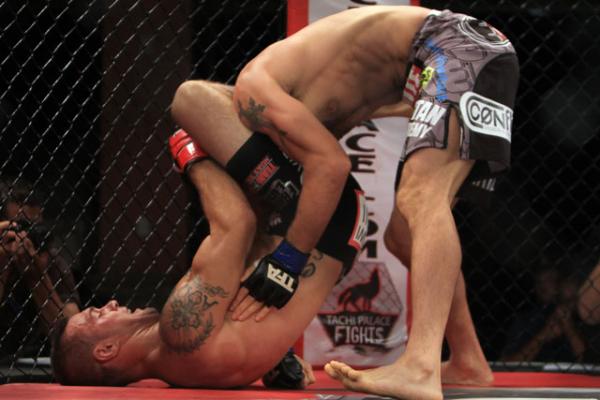 
Christos Giagos was dealt an unusual hand, but he played his cards well and took home the Tachi Palace Fights lightweight title for his efforts.

Thursday night at the Tachi Palace Hotel and Casino in Lemoore, Calif., Giagos tapped “The Ultimate Fighter” Season 12 alum Sevak Magakian to take the promotion's vacant 155-pound title in the main event of TPF 19 “Throwback Thursday.” It was not an opportunity originally afforded to Giagos, who was initially scheduled to face Mario Soto on the card. However, when unbeaten hot prospect Cain Carrizosa was forced to pull out last week due to an undisclosed injury, “The Spartan” got the chance to step up.

Giagos did just that. He patiently attacked the Magakian's body until the Armenian sought one of his leglocks. After diffusing a heel hook, toe hold and kneebar, Giagos ripped away at Magakian's unprotected head with leather while the Gokor Chivichyan student seemed married to his leg. Magakian ate punch after punch before desperately working into top position, where he was quickly ensnared in a triangle which Giagos adjusted for the tap at 4:45 of the first round.

The 24-year-old Giagos moves to 9-2 with his title capture, while Magakian falls to 13-6-1 in his MMA campaign and has lost three of his last four.

Sacramento's Max Griffin moved himself up the 170-pound prospect ladder in a pairing of once-beatens, rear-naked choking Randall Wallace at 2:20 of the second stanza to improve to 9-1. The rangy Griffin found a home for his strikes early, rocking Wallace's head back with a variety of combinations until dropping him with hooks in the second round. It looked like Griffin's haste to find a rear-naked choke would cost him the finishing opportunity, but even after Wallace escaped, Griffin punched himself right back into dominant position and got the fight-ending choke.

In the foremost “throwback” of the “Throwback Thursday” offering, MMA cult hero Olaf Alfonso returned to the Tachi Palace for the first time in over five years against Team Alpha Male's Adrian Diaz. It was a standard outing for the man affectionately dubbed “Meth Jesus” by the MMA faithful, as he showed solid offensive striking and grappling coupled with absolutely zero defense.

Despite hard leg kicks and even threatening a rear-naked choke, the Guatemala-based Mexican repeatedly ran into clean, hard punches from Diaz, barely surviving an early second-round knockdown. Alfonso was dropped again in the third and as he desperately looked for Diaz's leg, Diaz flurried until referee Mark Lawley stepped in to save a bloodied-but-irate Alfonso.

In his first bout in nearly three years, Diego Saraiva took a rugged, well-appointed unanimous decision with three 29-28 scores over fellow UFC veteran Eddie Yagin at 145 pounds. “The Filipino Phenom” took the first round with heavy, accurate ground-and-pound, but Saraiva used a diligent jab to tire Yagin and work his way back into the fight. The Atlanta-based Brazilian's jab and the body-punching combinations that came behind it hurt his foe in the second round and kept Saraiva in the driver's seat for the final 10 minutes.

A pair of teenage bantamweight strikers made sterling pro debuts at TPF 19, as Kelly McGill and Castle Williams stole the show on the undercard.

The 18-year-old McGill needed only 93 seconds to dispatch Leslie Rodriguez with flair. The Last Stand Fight Team product showed off crisp, mature boxing, setting Rodriguez up for a left hook-right hook combo that dropped her, then finishing her off with a flurry. Meanwhile, the 19-year-old Williams, a protege of Chuck Liddell trainer John Hackleman, used a flawless spinning-back kick to fold Cameron Ramirez in half at 3:29 of the first round.

In a true regional MMA-style twist, 6-19 Rafael del Real ran out of his fight with Josue Lugo, leading to popular Tachi local Andrew Martinez stepping in on two hours notice. Lugo jabbed Martinez up ably until an accidental eye poke to “Mickey D” resulted in the fight being deemed a no contest at 2:02 of the opening round.

Hometown bantamweight prospect Alex Perez upped his mark to 11-2, pounding out Arizonan journeyman Del Hawkins at 2:23 of the opening round. Perez's long, aggressive punches forced Hawkins to the floor, where “The Decision” pounded away, took back mount and easily sealed the deal.

David Terrell pupil Jordan Williams had a victory taken from him at 170 pounds. After pounding on Mexico's Rodrigo Vargas Meija for five minutes, an inconsequential cut on Williams forced a hasty doctor stoppage after five minutes.

Bakersfield big man Josh Powell endured massive cardiovascular struggles to outlast Jerod Brown and win a unanimous verdict. Powell tagged Brown early and often, but couldn't get his target out of the cage and was breathless for most of the nine-minute bout.