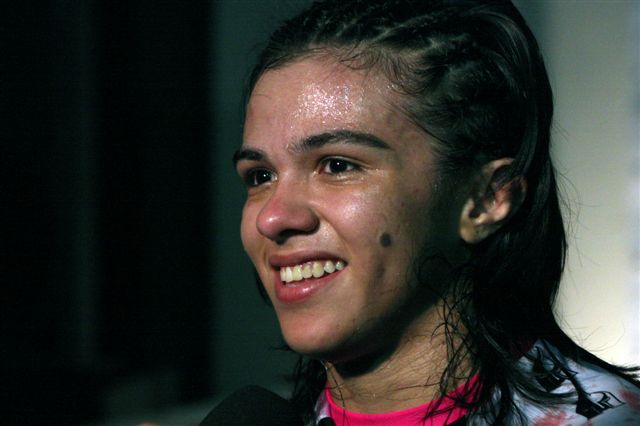 A previously reported bout between Claudia Gadelha and Carina Damm will not take place at Legacy Fighting Championship 13 as originally expected.

The bout was pulled from the event due to communication issues between Gadelha's camp and the promotion. Sherdog.com confirmed the news with sources close to the fighter as well as the promotion. LFC 13 takes place Aug. 17 at the Europa Expo in Dallas and will be headlined by a heavyweight championship bout pitting undefeated Jared Rosholt against onetime Bellator talent Derrick Lewis. The show's main draw, which airs live on AXS TV, will also see UFC veteran Junior Assuncao take on seven-time Shark Fights competitor Douglas Frey.

Gadelha [pictured], 23, has yet to taste defeat as a professional, submitting five of her first seven victims in the opening round. A product of the Nova Uniao camp, “Claudinha” last competed on April 20, edging Valerie Letourneau in a split decision at Wreck MMA “Road to Glory” in Quebec.

A full decade older than Gadelha, Damm has gone nearly a year without competing. The 33-year-old saw a 10-fight winning streak snapped in 2010, when she was submitted by Hitomi Akano at Strikeforce Challengers 10 in a loss that would signal the start of a three-fight skid for the Brazilian. Defeats to Cat Zingano and Tara LaRosa would follow for Damm, who responded by posting wins in both of her last two fights, submitting Antonia Deize with a kimura and then using an armbar to stop Sheila Carvalho Santos in July 2011.