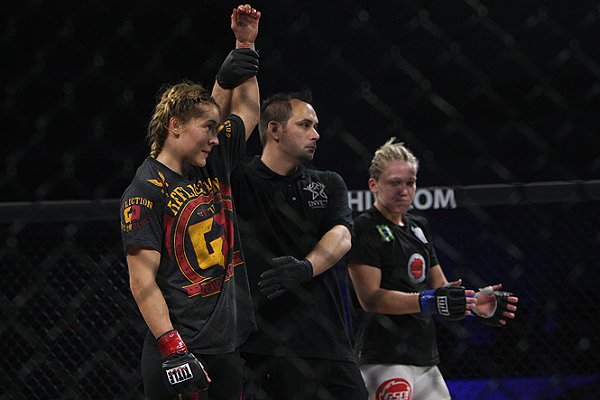 Marloes Coenen couldn’t get another submission over France’s Romy Ruyssen, but the former Strikeforce champion was never in danger, cruising to a unanimous decision in the headliner of Invicta FC’s inaugural outing Saturday night at the Memorial Hall in Kansas City, Kan.

Coenen, 31, never got much of a chance to put her aggressive submission game to use against Ruyssen, who she tapped with a second-round rear-naked choke in August 2008. Ruyssen, who weighed in at 150 pounds for the featherweight contest and forfeited 25 percent of her purse, seemed to have no strategy beyond clinching Coenen along the cage and praying for a takedown. Coenen defended easily, forcing Ruyssen into both grabbing the fence and being deducted a point by referee Greg Franklin, and fruitlessly playing guard. Dave Mandel
It was Coenen who took
Ruyssen for a ride.
When Coenen did get moments on the ground, she preferred to use her elbows, smashing Ruyssen with several salvos of short forearms when she looked for armbars. After three rounds, judges Kevin Champion, Henry Gueary and Victoria Miller-Pence had an easy task in awarding Coenen three 30-26 scorecards and a unanimous verdict.

Coenen moves to 20-5 with the victory, while Ruyssen falls to 5-2, with both losses coming to her Dutch rival.

Action was far more plentiful in the evening’s co-feature, as Jessica Penne bloodied veteran Lisa Ellis en route to a third-round stoppage in their 105-pound scramblefest.

Penne’s reach, leverage and scrambling proved problematic for the Olympia, Wash., native almost immediately. Ellis couldn’t impose her wrestling game as she’s accustomed to, with Penne quickly getting up from her first takedown, only to complete one of her own. When Ward did end up on top in the first 10 minutes, she was under constant threat from sweeps, leglocks and armbars from the 29-year-old Penne.

It was anybody’s bout heading into the third and final round, but Penne quickly seized the moment, landing two sharp knees from the clinch that crunched Ellis’ nose, turning on the bloody faucet. Ellis powered her way to a desperation takedown, but Penne quickly swept her bloody foe, set up on top, and began to seal the deal. Ellis turned sideways while Penne continued to pound away, smearing blood with her gloves until referee Chuck Wolfe intervened at 2:48 of the final round. Penne moves to 9-1 with the win, her lone loss coming to former Bellator 115-pound champion Zoila Gurgel. 
It took Randi Miller nearly two years to find an opponent for her pro debut, and it took her a while to warm up, but the 2008 Beijing Games bronze medalist scored a third-round knockout in her first MMA outing against Oceola, Mo.’s Mollie Estes.

Miller, who suffered the same fate as Ruyssen for coming in at 150 pounds, didn’t look the part of an Olympic athlete early, bowling forward with her arms out, eating copious strikes from Estes. The five-foot-nine Estes was able to use her leverage to keep the five-foot-two Miller from dumping her on the mat, crossfacing and punishing Miller with knees as she repeatedly lunged for takedowns.

However, Miller simply wore out the 36-year-old Estes out. When she got top position late in round two, Miller showed off some brutish ground-and-pound, which she would eventually use to end the bout. In the final frame, Miller took top position on her worn out foe and smashed her with heavy rights until referee Michelle Drake Browning was forced into action at 3:27.

The night was not without some small measure of controversy, as Kaitlin Young and Leslie Smith went tit-for-tat for 15 minutes, resulting in a split draw in their bantamweight contest.

Pleasant Hill, Calif.’s Smith was the aggressor throughout the bout, changing stances, attacking with power hooks and lunging at her Minnesotan foe with kicks to the legs, body and head. Young, however, preferred to stay on the outside and work her jab, picking off Smith as she charged forward into range.

Judge Kevin Champion gave the round to Smith, awarding her the bout 29-28, while Henry Gueary gave it to Young, giving her a 29-28 scorecard. Deciding judge Victoria Miller-Pence gave the final round a 10-10 for a 29-29 scorecard, creating a split draw. Sherdog.com saw the bout 29-28 for Leslie Smith. D. Mandel
Miller took a minute to warm up
but finished in brutal style.
In the evening’s most lopsided bout, former Strikeforce 135-pound title challenger Liz Carmouche ran roughshod over Saint Joseph, Mo.’s Ashleigh Curry. The physical Carmouche mounted Curry almost immediately and began to piston her foe with rights and lefts. Curry, whose eyes were closed for what seemed like the duration of the beating, made it until 1:58 of the first round, when referee Greg Franklin mercifully stopped the bout, giving the “Girl-rilla” her sixth win in eight pro bouts.

Strikeforce bantamweight veteran Sarah D'Alelio broke her two-fight skid, easily overwhelming previously unbeaten Californian Vanessa Mariscal. D'Alelio rode Mariscal's back for the first round, but couldn't find the rear-naked choke she sought. In the second frame, “The Monster” went for strikes instead, getting to full mount and punishing Mariscal until she turned fetal and tapped to punches at 3:19 of the second frame.

Sally Krumdiack might be nicknamed “Slick,” but underrated Sarah Schneider was slicker still, as the Raytown, Mo., fighter earned a smart first-round submission. After cutting Krumdiack open with her strikes, Schneider first locked up a triangle before switching to a fight-clinching armbar at 3:01 of the 115-pound contest. Schneider, whose pedestrian record belies her skill, now stands at a deceiving 6-5.

37-year-old Amy Davis used her grappling to take out Nicdali Rivera-Calanoc. The Idaho native took her time until grabbing a double wristlock on “The Night Queen” in the second round, cranking it behind her head for the tap at 3:47 of round two.

Ada, Okla.'s Sarah Maloy pounded out a unanimous decision (30-27, 29-28, 29-28) over Michelle Gutierrez in their 125-pound contest. Maloy battled back from a brief, bizarre double knockdown in the second round to resume control of the bout on the feet until the final horn.

Sofia Bagherdai wound up over 120 pounds in her pursuit to make 115 for Thursday's weigh-ins, and didn't look herself physically against unbeaten Ashley Cummins. The St. Louis police officer used her counter punching, leg kicks and repeated takedowns to disrupt Bagherdai, soundly imposing her gameplan throughout the fight to easy scores of 30-27, 30-27 and 29-28, and moving to 3-0 as a pro after posting an 8-0 amateur mark.

In the evening's opening bout, late replacement Cassie Rodish made short work of Meghan Wright, bullying the Cincinnati native to the floor and locking up a fight-ending guillotine from the top in just 36 seconds.