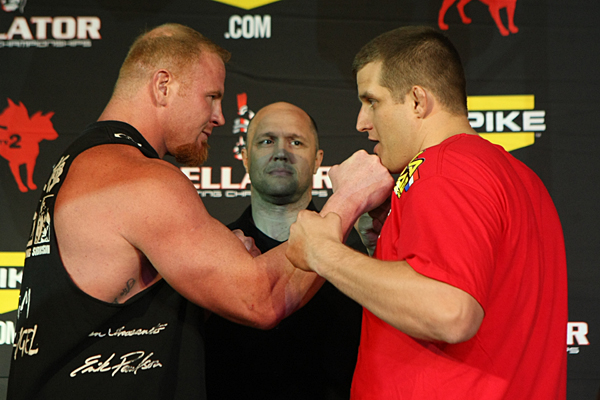 Both champion and challenger have been cleared to compete in the Bellator 70 main event, as Cole Konrad and Eric Prindle each checked in under the heavyweight limit at Thursday’s weigh-ins.

Bellator’s heavyweight ruler tipped the scales at 265.2 pounds, while Prindle weighed in at 265 even. Bellator 70 takes place Friday night at the New Orleans Convention Center and airs live on MTV2 and Epix, delayed on the west coast. The event caps Bellator’s ongoing sixth season, which showcased five tournaments simultaneously for the first time in the organization’s history.

In addition to the heavyweight title headliner, the Season 6 lightweight finals will also be contested tomorrow night, as former welterweight standouts Rick Hawn (156) and Brent Weedman (156) battle for a shot at Michael Chandler’s championship.

Prior to that confrontation, Luis Alberto Nogueira (135.8) and Hiroshi Nakamura (135.8) will throw down to decide who will square off with Marcos Galvao in the bantamweight finals, which will be contested during the Chicago-based promotion’s upcoming Summer Series. UFC veteran Rich Clementi (157.2) will also see action on Friday night, as “No Love” locks horns with onetime Shark Fights talent Francisco Derek Campos (154.8).

Prindle, 35, became the Season 5 tournament winner by default after an unfortunate series of events caused the finals to be canceled. Initially, “The American Soldier” met Thiago Santos to decide the tournament champion back in November, but that fight resulted in a no-contest after the Brazilian kicked Prindle in the groin. The bout was then rescheduled for Bellator 61 on March 16 but was pushed back a week after Prindle developed flu-like symptoms. Santos then failed to make weight for the Bellator 62 showdown, and Prindle was declared the Season 5 tournament winner.

*Each fighter who missed weight will forfeit a portion of his purse.