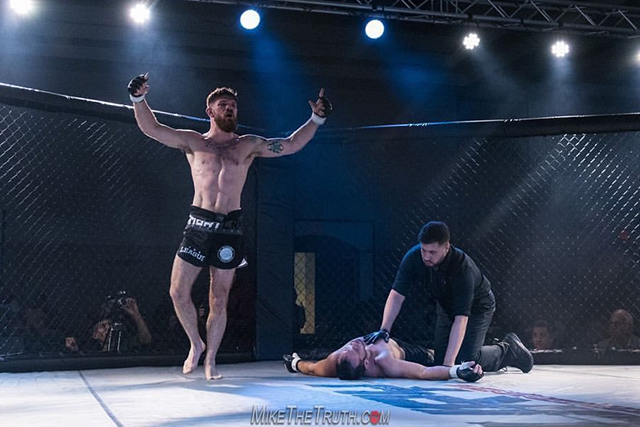 The fight played out as a classic striker-versus-grappler matchup, with the veteran Trujillo landing heavy punches throughout the first round and Wright working diligently to get the fight to the floor. On the occasions where Wright managed to secure the takedown, however, Trujillo fought out of a variety of submission attempts and escaped to his feet. In the second round, perhaps showing fatigue, Trujillo gave up an early takedown, and it was all Wright from there. An extended series of scrambles and positional battles ended with Wright cinching a triangle choke that left Trujillo no choice but to tap out at 3:37 of the second frame.

The win leaves Wright (8-4) the new Fury featherweight champion, runs his modest winning streak to three fights and appears to vindicate the 30-year-old’s decision to move up from bantamweight in 2018. Meanwhile, the 37-year old Trujillo (21-22), a former two-division standout in Fury, is staring down a five-fight losing streak and falls below .500 for the first time in his lengthy career.

In the co-main event, bantamweight Adrian Yanez defeated Warren Stewart via second-round punches, dominating for nearly a round and a half before forcing referee Chris Reed to intervene as Stewart failed to defend himself from a shower of strikes. The win runs Yanez’s record with Fury to 3-0 with three stoppages, and his overall record to 8-3 in matches contested largely in Fury and the Legacy Fighting Alliance.

In other main card action, David Armas (9-17) defeated the debuting Christopher Miller-Cox with a quick guillotine choke at 1:14 of the first round of their welterweight affair; flyweight prospect Jonathan Davis (2-1) knocked out the debuting Shaun Vaughn in a mere 1:07; and Nicolas Escheverry (4-2) used superior craft on the ground to ensnare Josh Hill (5-3) in a second-round rear-naked choke.