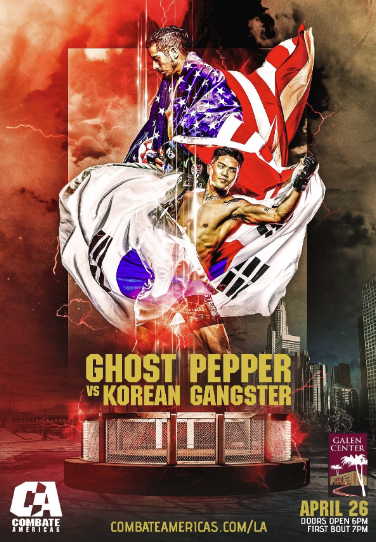 In anticipation of their upcoming April event in Los Angeles, Combate Americas has added four solid matchups to its lineup.

In their official press release on Thursday, the promotion announced four new bouts on their April 26 event at the Galen Center in Los Angeles. The first will take place at atomweight, between Alliance MMA product Paulina Granados (4-3) and Chilean Gloria Bravo (4-4). The event will air on DAZN for the U.S. and Canada, and in Spanish in the U.S. on Univision and UDN.

At lightweight, a battle will take place for the best nicknamed fighter of the night, when Erick "The Ghost Pepper" Gonzalez (9-3) faces off against "The Korean Gangster" Won Sik Park (14-7-1, 1 NC).

Already competing for Combate Americas seven times, Gonzalez last appeared at Combate Americas: Mexico vs. Spain earlier this month, where he knocked out Alejandro Martinez in the first round. All but two of Gonzalez's career bouts have taken place in his home state of California. Meanwhile, Won prevailed in his promotional debut in spectacular fashion, when he obliterated Jose Luis Medrano with a flying knee and follow-up punches in 108 seconds last November.

Also announced for this event include a featherweight tilt taking place between Jose Estrada (5-2) and the unbeaten Adrian Guzman (3-0). On the preliminary card, flyweights Oscar Suarez (4-2) and Michael Reyes (5-4, 1 NC) will meet.

Combate Americas: Reinas del Combate will take place on Friday, April 26 at the Galen Center in Los Angeles. Headlining the event will be a strawweight clash between Melissa Martinez and Caroline Gallardo Reinoso.