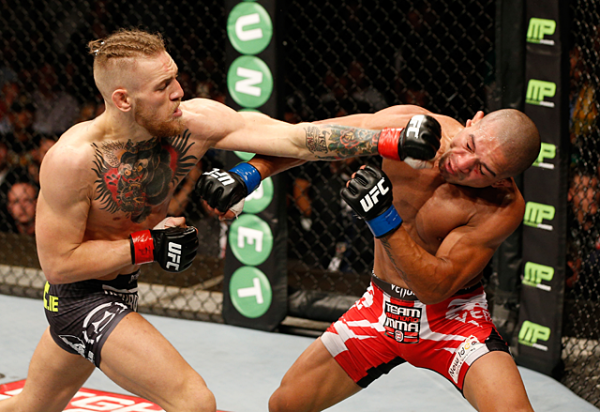 
Conor McGregor introduced Diego Brandao to the substance behind the hype.

McGregor put away “The Ultimate Fighter” Season 14 winner with first-round punches in the UFC Fight Night “McGregor vs. Brandao” headliner on Saturday at The O2 in Dublin, as the Ultimate Fighting Championship returned to Ireland’s capital city for the first time in more than five years. Brandao (18-10, 4-3 UFC) -- who replaced the injured Cole Miller -- withered 4:05 into round one.

A former two-division Cage Warriors Fighting Championship titleholder, McGregor (15-2, 3-0 UFC) reversed an attempted takedown from the Brazilian in mid-air and engaged him on the ground. The charismatic Irishman deftly dodged various submission bids, including a heel hook, and tore into Brandao with ground-and-pound. Once they returned to their feet, McGregor took aim at a compromised foe. He backed up the fading Brandao with a right hook to the body and drove him back to the canvas with a straight left to the head, setting up shop in a kneeling position. The right hands fell next, leaving referee Leon Roberts no choice but to intervene.

Afterward, McGregor, his 11th consecutive victory in the bank, was greeted by the howling approval of his countrymen.


In the co-main event, highly touted Icelandic export Gunnar Nelson kept his undefeated record intact, as he submitted Zak Cummings with a second-round rear-naked choke. A replacement for the injured Ryan LaFlare, Cummings (17-4, 2-1 UFC) asked out of the match 4:48 into round two.

Nelson (13-0-1, 4-0 UFC) was measured with his attacks, as the 25-year-old Renzo Gracie protégé paired straight right hands with body kicks and knees from the clinch. Cummings fought well in spurts but could not solve the riddle standing across from him. Late in the second round, Nelson pulled “The Ultimate Fighter” Season 17 qualifier to the ground with a front head lock, moved to his back and locked down a body triangle. Slashing punches and hammerfists followed, bloodying Cummings’ nose and softening him for the closing choke.

SBG Ireland’s Nelson has won 13 fights in a row, 12 of them finishes.


Well-disguised takedowns, kicks to the leg and body and superior topside grappling spurred former Tachi Palace Fights champion Ian McCall to a unanimous verdict over Brad Pickett in a high-stakes flyweight showcase. All three judges scored it for McCall (13-4-1, 2-2-1 UFC): 30-27, 30-27 and 29-28.

Pickett (24-9, 4-4 UFC) always seemed to be a step behind the man they call “Uncle Creepy.” McCall leaped in and out of the pocket, popping the Englishman with repeated straight lefts to the head and kicks to the body while largely steering clear of danger. The Team Oyama export executed takedowns in the second and third rounds, twice achieving full mount.

McCall put the finishing touches on his second straight win in the closing minutes, as he grounded the American Top Team standout, briefly moved to mount and eventually settled in half guard, applying enough ground-and-pound to keep Pickett on the defensive.


“The Ultimate Fighter: The Smashes” winner Norman Parke shredded the well-traveled Naoyuki Kotani with ground-and-pound, scoring a second-round stoppage in their lightweight showcase. Kotani (33-11-7, 0-3 UFC) did not answer referee Marc Goddard’s calls to defend himself, resulting in the finish and an end to his 13-fight winning streak.

Parke (20-2-1, 4-0-1 UFC) slowly picked apart the Japanese veteran in the standup -- knees, standing elbows and straight lefts were his weapons of choice -- before turning to his takedowns. The 27-year-old judo black belt struck for a pair of them in round two, ultimately climbing to a dominant position before he unleashed the fight-finishing volley of punches and elbows.


Swedish brute Ilir Latifi knocked out two-division Gladiators in the Cage champion Chris Dempsey with a sneaky straight right in the first round of their preliminary light heavyweight confrontation. A replacement for the injured Tom Lawlor, Dempsey (10-2, 0-1 UFC) met his end 2:07 into round one.

Latifi (9-3, 2-1 UFC) wrecked the American’s lead leg with a series of savage kicks. One of those kicks swept him off his feet and forced him into a backward retreat, leaving him vulnerable. Latifi followed him to the cage and blasted him with a crushing right hand that sent him to the canvas and separated him from his senses.


Onetime Cage Warriors Fighting Championship titleholder Neil Seery avenged a May 2010 loss to Phil Harris, as he captured a unanimous decision from English judoka Phil Harris in a preliminary flyweight tilt. All three cageside judges scored it the same: 30-27 for Seery (14-10, 1-1 UFC).

Harris (22-12, 1-3 UFC) was on his heels from the start. Seery floored him with an overhand right in the first round and kept him bottled up with clean punches, crisp footwork and airtight takedown defense. The 34-year-old Irishman mixed in takedowns in the judo black belt, battering Harris’ legs with standing kicks and applying ground-and-pound when the situation called for it. Seery has won five of his last six bouts.


Former Cage Warriors champion Cathal Pendred submitted “The Ultimate Fighter” Season 19 teammate Mike King with a second-round rear-naked choke in a dramatic undercard duel at 185 pounds. King (5-1, 0-1 UFC) blacked out 3:33 into round two, experiencing the first defeat of his career.

Pendred (14-2-1, 1-0 UFC) withstood a furious assault from the American in the opening frame. King dropped the Irishman with a straight right, bombarded him with ground-and-pound and eventually achieved full mount. He nearly finished it on multiple occasions, first with a rear-naked choke and later with ground-and-pound. Pendred somehow survived, perhaps buoyed by the raucous partisan crowd backing him.

At the start of round two, it became clear King had expended all of his reserves in pursuit of the stoppage. Pendred capitalized, ultimately transitioning to the back, hooks in, for the fight-ending choke.

Troeng (16-6-1, 1-2 UFC) had his moments. He pursued a persistent clinch in the first round, often combining knees to the body with close-quarters punches to the head. However, the Swede’s successful takedowns were countered at every turn by Smith, an experienced amateur wrestler who used Troeng’s aggression against him. He turned the tide in the second round, where he threatened with a tight guillotine choke, and hit the gas in the third, where the Strikeforce veteran again swept into top position, slid onto Troeng’s back and attacked with ground-and-pound.


Ukrainian kickboxer Nikita Krylov put away Cody Donovan with first-round ground-and-pound in an undercard scrap at 205 pounds. Donovan (8-5, 1-3 UFC) met his end 4:57 into round one, as he suffered his third straight defeat.

The two light heavyweights engaged on the feet and on the ground in an encounter filled with scrambles and reversals. Krylov (17-4, 2-2 UFC) dodged an attempted rear-naked choke from the Brazilian jiu-jitsu black belt, assumed top position and forced the Nate Marquardt disciple into a defensive shell on all fours. The punches then flowed freely from “Al Capone,” a series of unanswered rights closing the deal.

Krylov, 22, has secured all 17 of his professional wins by knockout, technical knockout or submission inside one round.

Holohan (10-0-1, 1-0 UFC) cracked and floored the American with a ringing right uppercut roughly 75 seconds after the start, followed up with punches and settled in half guard. Sampo threatened with an armbar, but the unbeaten Irishman countered and wheeled to his back in one fluid motion. Moments later, the choke was in place, the tapout not far behind.

The 26-year-old Holohan has rattled off five consecutive victories.