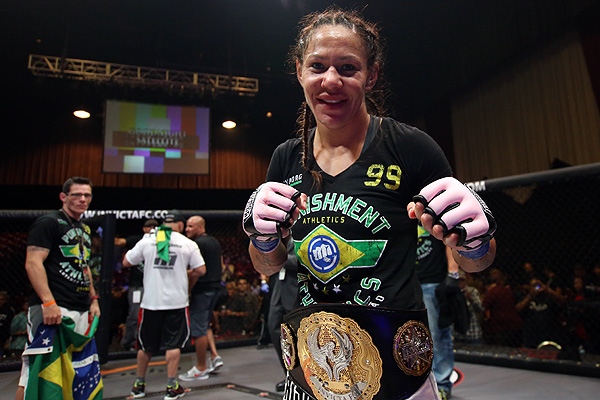 
Just one day before Ronda Rousey defends the UFC women’s bantamweight strap against Cat Zingano, would-be foe Cristiane Justino will put her featherweight title on the line against Charmaine Tweet at Invicta Fighting Championships 11 in the same city.

“Cyborg” was originally slated to make her bantamweight debut in December, but an injury knocked her out of Invicta FC 10. The former Strikeforce champion then scrapped her plans to move to 135 pounds entirely, telling Tatame that she would only fight at featherweight or at a catch-weight in the future. That decision seemed to end any hopes for a dream showdown between “Cyborg” and Rousey.

However, UFC CEO Lorenzo Fertitta recently told ESPN.com that the Las Vegas-based promotion was in contract negotiations with Justino. Having “Cyborg” compete one day before Rousey could generate just the type of momentum needed for one of the most anticipated bouts in women’s MMA.

"We certainly have an interest in Cyborg fighting for us," Fertitta said. "We feel that down the road, there is a possibility of a big fight between her and Ronda, but there are still a lot of things that need to happen. She needs to prove she can get down to 135 pounds before we would take the risk of making that fight happen. Obviously, if she came over and didn't make the weight, it would be a disaster."

“Cyborg” has not lost since her professional debut in 2005, with a no-contest for a failed drug test following her 16-second stoppage of Hiroko Yamanaka at Strikeforce “Melendez vs. Masvidal” the only blemish on her record since then. The 29-year-old Brazilian has posted triumphs over Fiona Muxlow and Marloes Coenen under the Invicta FC banner, but she did not compete at all in 2014.

Tweet, meanwhile, is 6-4 as a professional and will enter the bout on a two-fight winning streak. The 37-year-old Canadian last appeared at Invicta FC 8, where she defeated Veronica Rothenhausler via first-round technical knockout. “Not So Sweet” has finished all of her victories inside the distance, including five via submission.

The Invicta FC 11 co-main event will feature a clash between strawweight striking phenoms Alexa Grasso and Mizuki Inoue. The 21-year-old Grasso is unbeaten in six pro outings, including a first-round stoppage of Alida Gray at Invicta FC 10. Inoue, 20, is 8-3 overall and dropped a hard-fought split verdict against Karolina Kowalkiewicz in her most recent bout at Invicta FC 10.

Six more fights round out the Invicta FC 11 lineup: DeAnna Bennett vs. Lynn Alvarez at strawweight; Irene Aldana vs. Melanie Lacroix at bantamweight; Jamie Moyle vs. J.J. Aldrich at strawweight; Brianna VanBuren vs. Amy Cadwell Montenegro at strawweight; Christine Stanley vs. Emily Corso at flyweight; and Kristi Lopez vs. Aspen Ladd at flyweight.