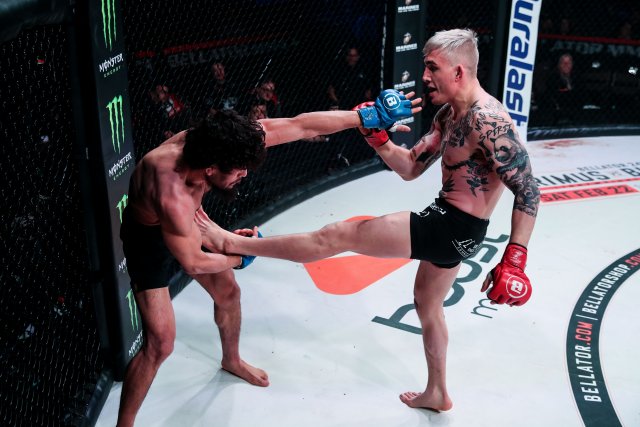 Cris Lencioni completed his contract at Bellator 239, where he defeated a game Salim Mukhidinov by split decision.

His victory over Mukhidinov might have flown under the radar since the featherweight contest aired on the post-lims, but it was probably one of the toughest fights of Lencioni’s career to date. The Gracie Barra Portland representative revealed to Sherdog.com that he fought the majority of the bout on a broken leg.

Lencioni believes the break occurred in the first round, but he did his best not to let it affect him for the final two frames.

"I knew right away in the fight," he said.

As he attempted to navigate the cage, Lencioni recalls thinking to himself, "Holy crap, my leg's not listening to me." He knew something was wrong and did his best to change course.

Nonetheless, Lencioni didn’t move like someone who was severely impaired. He even had a pretty tight body triangle locked in, one that he was visibly squeezing and making tighter. Prior to that, he attempted takedowns with the thought that his leg may be broken.

"I knew that was going to hurt. Every single one of them," Lencioni said. “Every step, every penetration shot, every squeeze with my legs was just agonizing pain.”

Lencioni pushed through the pain because he hopes to have a lengthy career, and he already has his sights set on a future showdown with Bellator prospect A.J. Agazarm. Additionally, Lencioni works with kids and knows longevity in the sport is not only good for business in MMA, but can serve as a path to be a great role model and sponsor the next generation of martial artists.

"It's a powerful motivator," he said.

Check out the full interview with Lencioni here.

Edward Carbajal serves as the co-host for Coast-2-Coast Combat Hour podcast and holds a black belt in Brazilian Jiu-Jitsu and a brown belt in Ishin Ryu Karate. He has covered combat sports since 2014 and has been a fan of MMA since the first UFC. You can follow Edward on Twitter @Carbazel or at his website TheBlogBoardJungle.com.