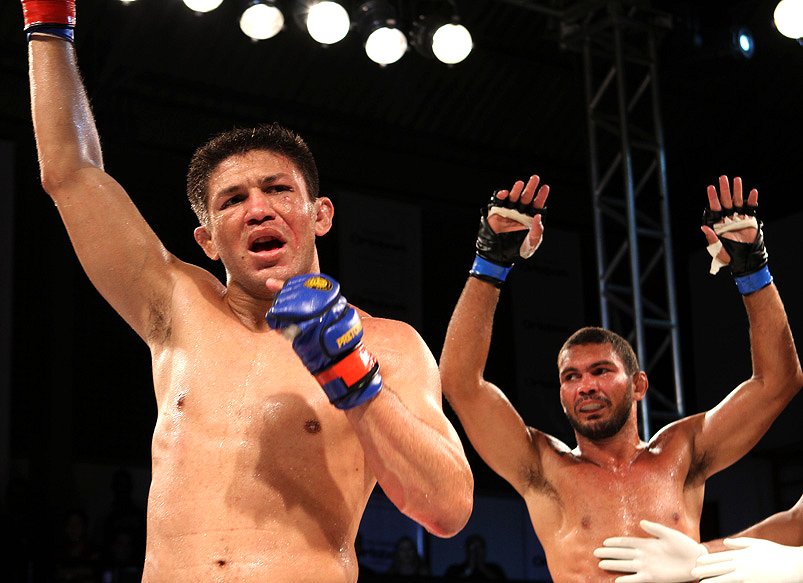 The small gymnasium was packed with just under 600 spectators. However, the Rio crowd witnessed a main event showing the ongoing emergence of northeastern Brazil’s fight scene, as Salvador’s Edilberto "Crocota" de Oliveira and Natal’s Sergio "Junior" Melo fought to a hotly-contested draw in their welterweight affair.

As usual, “Crocota” baited the crowd with his bad boy antics, while Melo, who now trains in Rio with Renovacao Fight Team, cemented himself as the crowd favorite an amusing rendition of the motorcycle dance, a typical northeastern dance, as he entered the ring.

“Crocota” started more aggressively, winning the first round with cleaner, harder punching. However, Melo recovered in the second round, using strong low kicks to disrupt the balance of his aggressive foe, who seemed confused by his attack. At the end of two rounds, all three judges had the bout 19-19. 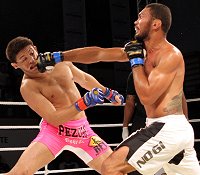 M. Alonso
'Crocota' cracked Melo early but
couldn't earn the decision win.
It was the third round that would decide the fight, and it was as equal as it gets, with both fighters aggressively trading blow-for-blow, but unable to land one hard shot to gain the upper hand. Sherdog.com scored the round 10-10, for a 29-29 scorecard. Two of the ringside judges agreed, declaring the fight a majority draw.

“You made a mistake,” Oliveira lectured after the fight. “I broke my hand in the first round, but I didn’t lose that fight.”

A more contemplative “Junior” put the bout in perspective.

“This was a victory for the northeast of Brazil,” said Melo. “He is from Bahia, I’m from Natal. Tonight we showed that northeastern fighters deserve more opportunities in big events.”

It was a great night for a pair of prospects from Brasilia’s Constrictor Team, as Francisco "Massaranduba" Drinaldo and Renato Moicano each picked up impressive victories, showing that Paulo Thiago and Rani Yahya aren’t the only tough guys produced by trainer Ataide Junior.

After wins over Pride veteran Luiz Firmino and tough journeyman Flavio Alvaro, Drinaldo was the favorite to win Jungle Fight’s inaugural lightweight title in September. In fact, in the tournament semi-final, Drinaldo dominated eventual champ Yuri Alcantara for the better part of two rounds until he was armbarred.

In his return to action, “Massaranduba” had absolutely no trouble tapping out an overmatched Bruno "Cro Cop" Lobato with an anaconda choke at 2:24 of the first round. 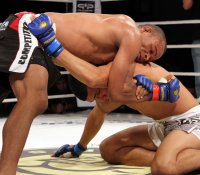 M. Alonso
'Massaranduba' had no trouble at all.
“I know I have to start everything again, but I love to fight. I really want to beat the toughest guys in Brazil, and show that I deserve my revenge against ‘Marajo’, maybe in the UFC,” said Drinaldo after the fight.

Drinaldo’s teammate, the 19-year-old Moicano, mixed aggressive stand-up with a great offensive ground game to dominate the tough and experienced Eduardo "Kiko" Felipe. After working “Kiko” over on the feet and the ground in round one, Moicano continued his non-stop rhythm in the second, tiring Felipe out and submitting him via rear-naked choke at 2:49 of the frame.

Both fighters spilled over the ropes when Alcantara stopped a Moura throw attempt, and shortly after, “Marajo” was dropped by an accidental kick to the groin and stayed down for several minutes. Once he recovered, Alcantara mounted Moura and punished him to earn the stoppage at 4:37 of the first round.

Having spent the last month training with Rio’s Renovacao Fight Team, the top luta-livre team in the country, “Giba” had no problem taking Burgo down, passing his guard and cranking a nasty kimura. Burgo prevented his shoulder from being dislocated by tapping at 3:02 of the first round. 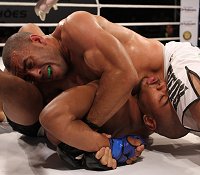 M. Alonso
'Giba' dominated with his grappling.
Light heavyweight Nelson Martins took a disqualification win over Bruno Capelosa when Capelosa rocked Martins, but followed up with several punches to the back of the head that left Martins unable to continue. The official time was 1:58 of round one.

In the opening bout of the evening, welterweight Wendell Oliveira pounded out late replacement Tadeu Mendonca 3:05 into the first frame.

“This year I produced eight editions and decided two champions, Yuri ‘Marajo’ [Alcantara] and Erick Silva. Yuri is already in UFC, Erick is very close to that,” promoter Wallid Ismail told Sherdog.com after the event.

“Next year I want to have three more GPs to decide champions at 83 and 93 kilos, and heavyweight,” Ismail continued. “The next edition will be February, in Espirito Santo. Probably in March, we’ll have another one in Belem, and I just signed with Flamengo to have four more editions here in Rio.”