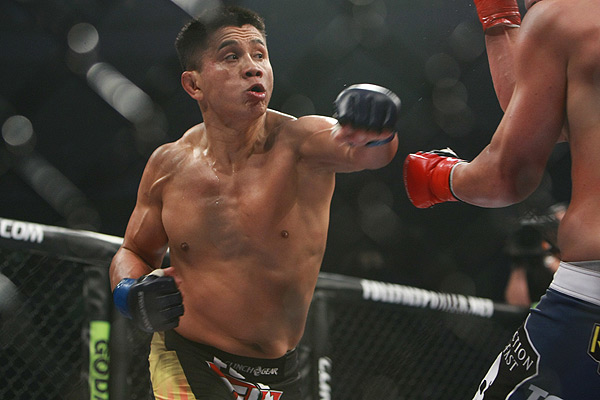 Cung Le provided MMA fans with one of the year’s cleanest knockouts in the UFC on Fuel TV 6 headliner on Saturday, putting former middleweight champion Rich Franklin to sleep with a perfectly-timed counter right hook to wrap the promotion’s inaugural event on Chinese soil.

The 185-pound main event took place at Cotai Arena in Macau, with both southpaws taking their time in establishing the striking range. Le ended the bout in the blink of an eye, timing his accurate counter punch just a moment after absorbing a low kick from Franklin.

Franklin tried to throw a punch of his own, but it was too late. Le’s haymaker crashed into Franklin’s jaw, instantly turning out his lights and sending him face-first to the canvas at 2:17 of the first round. Though the crisp counter earned Le “Knockout of the Night” honors, the former Strikeforce king was modest when asked about the fight-ending blow.

“I feel like I’m in a dream right now,” Le told Fox Spots following his first-round knockout of Franklin. “That was a money punch. I just saw him timing my kicks, so I waited for him to punch, and I threw that overhand right. I got lucky and caught him.”

After Franklin fell, Le began to celebrate wildly, performing a backflip before scaling the cage wall and hoisting his hands high as the crowd cheered the finish.

“It’s funny, when I hit him, I felt a little jolt in my elbow, but it was just all adrenaline,” Le said of the finishing sequence. “I don’t remember what happened. I was just so happy that all the blood went to my head, and I got a little dizzy.”

Le has now won consecutive fights for the first time in over four years. The middleweight’s last appearance came against onetime UFC title challenger Patrick Cote in July. Though the veteran sanshou stylist walked away from that UFC 148 clash with a unanimous decision win, he also took home a badly bruised foot, an injury that Le says has still not fully healed.

With Saturday’s triumph now behind him, the 40-year-old plans to take some time away from the cage to allow his body to recuperate. While Le knows time may be running short on his competitive fight career, he hopes to make the most of the time he has remaining as a member of the UFC roster.