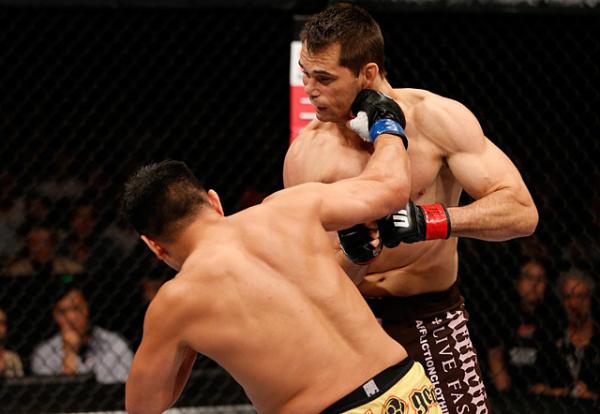 
Cung Le has his signature victory.

The former Strikeforce champion knocked out Rich Franklin with a clean counter right hook in the first round of the UFC on Fuel TV 6 headliner on Saturday at the Cotai Arena inside the Venetian Macau Resort Hotel in Macau, China. Franklin (29-7, 14-6 UFC) met his end 2:17 into round one.

“That was the biggest fight of my life,” Le said. “I couldn’t ask for anything more. I’m just grateful. I don’t know what to say. It was a lucky punch.”

Franklin was active from the outset, as he kicked effectively to Le’s legs and body, all while punching in combination to the head. However, he let his guard down on one of those aforementioned kicks and a pawing follow-up jab. Le (9-2, 2-1 UFC) capitalized, unleashing a devastating right hook that sent an unconscious Franklin crashing face first to the canvas.

“He kept on throwing that punch at me,” Le said. “I wasn’t able to time my kick because he was loading up and looking for me to kick so he could catch me with a punch, so I waited for him to punch and then came with the overhand right, and I caught him.”

Franklin had never before been finished so quickly. At 38, his future appears to be very much in doubt.

“I don’t know [what happened],” Franklin said. “I’ll have to go back and watch the tape. I’m still a little fuzzy right now. I’ll have to go home, go back to the drawing board and sit down with my coaches and make an intelligent decision.”

Silva (15-3, 6-3 UFC) -- who had not won since August 2009 -- survived an encounter with an overhand right from the Sengoku veteran, resulting in a knockdown late in the second round. Nedkov’s failure to finish cost him dearly. His legs savaged by a series of kicks from the Brazilian, Nedkov broke down quickly in round three. Sensing his opponent was a beaten man, the Blackzilian team member moved in for a takedown, transitioned to mount and cinched the choke without much resistance. The tapout followed soon after.

“[My strategy] was just to work my standup and kick his legs,” Silva said. “That’s what I did, and I used the right opportunity to take him down.”

In a performance that can only be described as utterly dominant, Dong Hyun Kim roared to a one-sided unanimous decision over Paulo Thiago in a welterweight showcase. Kim (16-2-1, 7-2 UFC) swept the scorecards by 30-26, 30-27 and 30-27 counts.

Thiago (14-5, 4-5 UFC) had no answers for his South Korean counterpart. Kim secured takedowns in all three rounds and then proceeded to sap the Brazilian’s spirit with a crushing top game. “Stun Gun” threatened Thiago with a barb choke, one of Thiago's own specialties, late in the second round and capped the stirring victory with a relentless barrage of ground-and-pound in the third.

Once considered one of the world’s top 10 welterweights, Thiago has lost four of his last five fights.

Former Pride Fighting Championships lightweight titleholder Takanori Gomi put forth what was arguably the best effort of his UFC career, as he captured a split verdict from “The Ultimate Fighter” Season 6 winner Mac Danzig. All three judges scored it 29-28, two of them in favor of Gomi (34-8, 3-3 UFC).

Now 34, Gomi threw punches and kicks with power and conviction, mixing in a first-round takedown and rekindling some of his past magic. Danzig enjoyed success in the clinch and threatened the Japanese star with a guillotine in round two. However, Gomi stayed aggressive, knocked down Danzig with a sneaky right hand inside the first 15 seconds of the third round and did enough to secure his second straight triumph.

A steady diet of takedowns and ground-and-pound drove former WEC title contender Takeya Mizugaki to a lopsided unanimous decision over Jeff Hougland in a bantamweight showcase. All three cageside judges scored it for Mizugaki (16-7-2, 3-2 UFC): 30-25, 30-27 and 30-27.

Mizugaki was efficient and effective on the feet, but he made his real inroads on the ground. The 28-year-old Japanese standout delivered takedowns in all three rounds, and unleashed a barrage of rights and lefts on Hougland (10-6, 1-2 UFC), who'd entered the cage with nine wins in his previous 10 appearances. Mizugaki put the exclamation point on the victory late in the third round, when he opened a nasty horizontal laceration above Hougland’s left eyebrow with a short elbow strike.

“The Ultimate Fighter” Season 15 alum set the tone from start, as he freed himself from a first-round takedown and threatened Zhang (15-4, 1-3 UFC) with an armbar. Tuck later settled into top position and transitioned from full mount to side control to back mount. The scene replayed itself in round two, where Tuck again moved to mount and attached himself to his foe’s back.

Zhang did his best work in the third round, when he attacked Tuck with heavy punches, including a wicked left hook that wobbled the 28-year-old. Even so, it was not enough to erase the deficit that confronted him when he entered the final five minutes.