SAN JOSE, Calif. -- The queen of MMA has been crowned.

Cristiane “Cyborg” Santos easily toppled Gina Carano via a technical knockout from strikes 4:59 into the first round to take Strikeforce’s 145-pound women’s title on Saturday at the HP Pavilion.

“Since the beginning, I knew this fight would be hard,” Santos said through a translator. “That’s why I trained so hard for this fight. The key for tonight was five years of training.”

In the debate of technicality versus power, Carano had little answer for Santos’ relentless aggression.

Santos, 24, attacked Carano at the bell, cornering and overwhelming “the face of women’s MMA” with a slew of punches on the fence.

Carano reacted with a throw that sent the Brazilian to the canvas, but Santos was already in motion, sitting back for a heel hook attempt.

The 27-year-old beauty escaped, but Santos continued to stalk Carano around the cage, beating her to the punch in numerous exchanges.

The pair kept an exciting, feverish pace that had the crowd on its feet for the duration. Carano attempted to find her range, landing a solid left jab, but Santos kept advancing.

Again, with her back against the wall, Carano took down Santos but chose to back out.

Santos punished Carano with a right leg kick, and Carano answered with kick that the Brazilian caught and shrugged off. 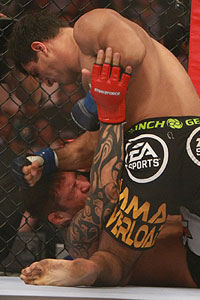 Dave Mandel/Sherdog.com
Mousasi took out "Babalu."
Santos then took down Carano with a minute remaining and went to work on a keylock from which the Las Vegas native wiggled free. However, Carano could not fend off Santo’s onslaught and rolled to a fetal position, as the Brazilian teed off. Referee Josh Rosenthal wisely put an end to the punishment with only one second left on the clock.

“I want to thank all the fans,” Santos said. “I train a lot, and everything I do is for the fans.”

Gegard Mousasi captured Strikeforce's light heavyweight title with an impressive technical knockout from strikes over Renato “Babalu” Sobral 1:00 into the first round.

The 24-year-old Armenian’s collected demeanor served him well in his U.S. debut. Sobral caught his leg on a kick, but Mousasi outmaneuvered the Brazilian and muscled him down to the canvas. From side control, Mousasi smothered Sobral with a flurry of head punches that rendered him unconscious.

In one of his sharpest performances to date, Gilbert Melendez retained Strikeforce’s interim lightweight title with a third-round technical knockout from strikes over Mitsuhiro Ishida at 3:56.

Melendez utilized crisp combinations and pressured Ishida with flurries and body knees each time he cornered the southpaw wrestler on the fence. It was one of these knees that crumpled Ishida to the mat midway through the third round and signaled the beginning of the end for the Japanese standout.

Ishida, 27, had out-wrestled Melendez for a unanimous decision in their first encounter at Yarennoka on New Year’s Eve in 2007.

Melendez seemed determined not to repeat history, rebuffing two early shots from Ishida and punishing the Japanese wrestler on the tail end of the second attempt with a knee to his body.

Melendez, 27, kept an offensive stance and distance with his probing jab and connected with a solid counterpunch when Ishida moved in to set up another takedown.

Ishida managed once to ground the mop-topped Melendez with a single-leg takedown. However, Melendez rose and reversed quickly, briefly taking Ishida's back.

Ishida appeared winded by the second round, as he attempted again to ground Melendez. Melendez sprawled and pushed Ishida to the fence, where Ishida struggled to deflect his aggressor’s knees and punches. Ishida, now bleeding from his right ear, retreated to his knees, fended off head punches from behind and eventually escaped to his feet.

Melendez countered well off an Ishida kick and went in for the kill in the third round, downing Ishida with the knee and then pouncing into his guard. Melendez finished a turtled Ishida with a barrage of strikes.

“Just had to be patient,” Melendez said. “Jake [Shields] told me in the corner, ‘I know they’re booing now, but when you knock him out, they’ll forget about it.’”

In a heavyweight opener to the main card, Fabricio Werdum submitted Mike Kyle with a guillotine choke 1:24 into the first round.

Kyle was aggressive out of the gate, landing a big opening punch to let his world-traveled opponent know he was gunning for an upset. He also connected with a stiff jab, then caught Werdum’s leg off a kick and backed the Brazilian to the fence. But he could not capitalize before Werdum took him down.

Kyle’s boldness continued on the canvas, as he latched a loose armbar onto the Brazilian jiu-jitsu black belt. Werdum escaped, circled around to north-south position and locked in a guillotine choke before jumping guard with Kyle in tow. Kyle tapped out shortly after.

Taylor, 26, hunted for the takedown from the opening bell, but Hieron sprawled and avoided nearly every attempt before grounding Taylor himself. Hieron, 33, worked a patient game in top position, landing selected shots that eventually bloodied Taylor’s nose. Taylor (13-4) remained preoccupied by Hieron’s methodical pace and was unable to launch his own offensive.

Behind on the cards, Taylor shifted gears in the final round, lunging forward with haymakers that Hieron (18-4) easily avoided. Hieron stayed poised but threw little leather himself in response. Taylor finally executed his only takedown but could not score before Hieron was back on his feet.