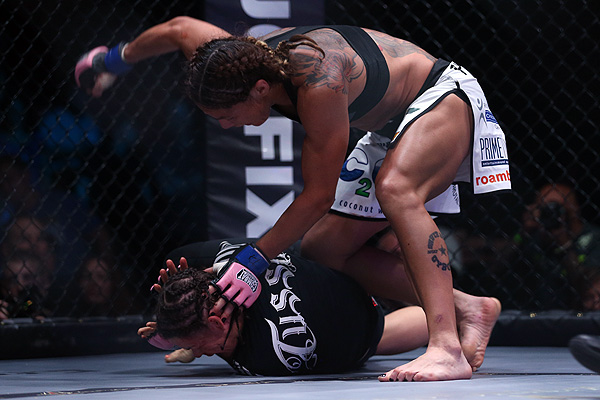 Cyborg did the expected Saturday at the Ameristar Casino Hotel in Kansas City, Mo., positively shellacking late replacement Fiona Muxlow in less than four minutes. Waterson, however, authored an inspirational upset in wresting the Invicta FC 105-pound title from Jessica Penne in one of 2013's best bouts so far.

Muxlow, who replaced the injured Ediane Gomes three weeks ago, was outmatched from the outset. Cyborg immediately dropped her with a right cross, and the rout was on. Heavy hooks and uppercuts raked Muxlow, who ended up on her back eating copious amounts of punishment. To her credit, the 35-year-old Australian absorbed an incredible beating but continued to move and try to defend herself. However, after finally making it back to her feet, a final flurry of clinch knees and hooks along the fence forced referee John McCarthy into action at 3:46 of the first round.

The victory was Cyborg's first action in nearly 16 months. The 27-year-old knockout artist had not competed since running over Japan's Hiroko Yamanaka in 16 seconds in the Strikeforce cage. The win was ruled a no contest by the California State Athletic Commission when Justino tested positive for the anabolic steroid stanozolol.

With the win, Cyborg improves to 11-1 with one no contest, while Muxlow falls to 6-3. Cyborg is anticipated to return at Invicta FC 6 on a yet-to-be-named-date in July, when she will meet Dutch veteran Marloes Coenen for the promotion's inaugural featherweight title. Cyborg successfully defended her Strikeforce 145-pound title against Coenen in January 2010, punching her out in the third round.

Waterson, a +400 underdog on some sportsbooks, showed a full complement of MMA skills in her championship win. The Greg Jackson and Mike Winkeljohn pupil immediately established she is no longer simply a striker, threatening Penne from the bottom with armbars and triangles. In the second round, she took Penne to the mat and mounted her. However, the back-and-forth grappling battle came to a head in the third. Photo: D. Mandel/Sherdog.com
Waterson's emotional sub was one of
the year's best so far.

Penne sprang to life in round three, taking down “The Karate Hottie” and knuckling her. The Orange County, Calif., native took full mount, punished Waterson and locked on a tight armbar. Just when it looked like order had taken over, Waterson gritted her teeth, let her elbow pop and escaped to fight another round.

Penne tried to build on that momentum in the fourth, but her takedown attempt was stuffed. Waterson took her back and transitioned to an over-the-top armbar to take the title in dramatic fashion at 2:31 of round four.

Waterson moves to 11-3 with the biggest win of her career, while Penne loses for just the second time in her 12-bout career.

Missouri native Barb Honchak was steady and methodical in capturing the vacant Invicta FC flyweight championship against slick-grappling veteran Vanessa Porto with scores of 50-45, 49-46 and 48-47.

The 33-year-old Honchak, who has worked in recent months with Pat Miletich in Bettendorf, Iowa, landed clean counters and combinations over the 25 minutes, keying on Porto's kick-heavy offense. As the bout progressed, the “Little Warrior” opened up with her own leg kicks, further tiring Porto and stifling the Brazilian's offense. In a fight with several nip-tuck rounds, it was Honchak's punch volume that made the difference in capturing the title, moving her to 8-2 as a pro.

The first and third rounds of the affair offered tight, technical striking from both women, each landing clean combination punches. Kaufman, now 16-2, walked through Smith's long, straight punches to tag her target with left hooks and right crosses. Meanwhile, Smith put her own spin on the standup with a high volume of kicks.

The second stanza offered the most intense moments of action, however, as Smith finally broke through with her bevy of head kicks, landing a roundhouse upstairs that put Kaufman on the deck. After 15 minutes, judges Ross Swanberg and Henry Gueary returned 29-28 scorecards for the Canadian to give Kaufman the split decision. Dissenting judge Brett Miller saw the contest 29-28 for Pleasant Hill, Calif.'s Smith. Photo: D. Mandel/Sherdog.com
Honchak countered Porto to the title.
Brazilian flyweight prospect Jennifer Maia earned a breakout win with a unanimous verdict (30-27, 29-28, 29-28) over former Bellator 115-pound champion Zoila Frausto Gurgel. In what was largely a tit-for-tat kickboxing contest, the 24-year-old Chute Boxe fighter's ability to control the clinch and her willingness to throw earned her favor with the judges, as Gurgel was sparse with her punches and kicks in a lukewarm performance.

The night's finest single highlight belonged to the colorful Rose Namajunas, who pulled off a sensational Rumina Sato impersonation against Kathina Catron.

Namajunas, the girlfriend of heavyweight slugger Pat Barry, rocked Catron immediately with punches before clinching and pulling off a picture-perfect flying armbar. The tap came in just 12 seconds, moving her to 2-0 as a pro after a 4-0 amateur career and earning her a standing ovation from the crowd.

Striking specialists Julia Budd and Kaitlin Young had differing results in attempts to showcase their grappling. Budd excelled in her featherweight outing against Mollie Estes, using her developing grappling to wear out the Oceala, Mo., native. Budd pummeled Estes from side control, full mount and back mount in the opening 10 minutes before securing a no-hooks rear-naked choke at 1:04 of the third round.

Meanwhile, Young started fast against Lauren Taylor, taking her back in the opening round and threatening first with a rear-naked choke and then a triangle in transition. However, Taylor weathered the storm and wrestled Young to the mat repeatedly in the final two rounds, even claiming back mount for herself en route to three 29-28 scores.

Outspoken Australian 115-pounder Bec Hyatt backed up her mouth against Austrian striker Jasminka Cive, taking her to the ground and punishing her. The “Rowdy” one smashed Cive from full mount for an extended period before snatching up the fight-ending armbar at 3:30 of the first round, handing Cive the first loss of her career. Photo: D. Mandel/Sherdog.com
Kaufman's clean punching got her the
split against Smith.

A questionable finish marred an impressive performance from Californian bantamweight Miriam Nakamoto. Midway through the first round, Nakamoto landed a knee that crushed foe Jessamyn Duke to her knees, prompting referee McCarthy into action. “The Queen of Mean” sealed the deal with another brutal knee strike, but it appeared to contact Duke while she was downed. Nonetheless, McCarthy deemed that he was already in the process of stopping the fight, giving Nakamoto the win at 2:20.

Finland's Katja Kankaanpaa slowed late but was able to use her superior wrestling and top position skills to earn a unanimous decision (30-27, 30-27, 29-28) over Brazilian striker Juliana Carneiro Lima at 115 pounds.

At 105 pounds, London's Simona Soukupova took out Cassie Rodish with clever use of her guillotine choke. The KO Gym rep repeatedly threatened with standing guillotines on Rodish until finally locking up the fight-ending submission at 3:20 of the second round. Elsewhere, Austalian atomweight Alex Chambers started the evening in style, taking out Jodie Esquibel in just 95 seconds via rear-naked choke.