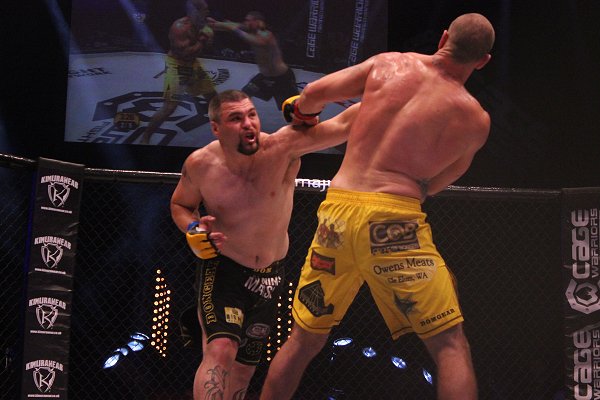 DUBLIN -- D.J. Linderman was crowned the new Cage Warriors heavyweight champion after a unanimous decision victory (49-46, 49-47, 48-47) over rival Mike Hayes in the main event of Cage Warriors 47 inside The Helix in Dublin, moving to 2-0 against his fellow Bellator veteran.

“Mike Hayes is a great standup fighter, you saw that when he tagged me. My plan was to take him down and use my ground game,” Linderman, now 12-3, told Sherdog.com. “He’s tough. I knew it would be a hard night, but now I’m the champion it was all worth it.”

Hayes connected on a number of occasions, but was reluctant to follow in after success with single shots. Linderman stayed calm, showed a willingness to engage and closed the distance for the takedown whenever possible. Although he never came close to submitting Hayes, his clear dominance was enough to convince all three judges after five rounds.

The headline fight rounded off a night of passion and high drama. In the co-feature, 23-year-old Dubliner Conor McGregor sparked anarchic celebrations and an attempted cage invasion when he claimed the featherweight belt with a second-round submission win over Dave Hill, moving to 11-2.

“Notorious” McGregor channeled the crowd’s fervor, marching forward with his hands held high. Early in round two, McGregor landed a head kick. Hill went to the canvas. Although he weathered the immediate storm, McGregor would not be denied and eventually snared his man in a rear-naked choke at 4:10 of the second frame to blow the roof off the joint. 
In the much-anticipated semifinal of Cage Warriors’ women’s 125-pound tournament, Rosi Sexton returned from a 15-month layoff to progress at the expense of Aisling Daly, in front of her home crowd, no less.

Sexton pushed the pace from the start, repeatedly backing Daly against the fence and looking to turn her clinch work into takedowns. Daly got close with an armbar attempt, but never got the chance to unleash the fearsome arsenal that earned her the nickname “Ais the Bash.” Daly rallied in the final round, but still found herself on the wrong end of three scores of 29-28.

“No fight ever goes totally to plan, but I was happy with my performance. I knew Aisling’s strengths and I knew what I had to do to win,” Sexton told Sherdog.com on her mission accomplished.

In the “Fight of the Night,” 24-year-old Dublin favorite Cathal Pendred put on a career-best performance to overcome experienced Swedish UFC and Pride veteran David Bielkheden. Pendred had too much firepower, dropping his opponent repeatedly. Despite the onslaught, Bielkheden was always in the fight, with his kimura a threat throughout. In the third round, Pendred hit the canvas himself, but he came back and reapplied the pressure to see out an impressive unanimous decision win with scores of 30-27 twice and 30-28. M. Bower
Sexton had to hang tough late
to win against Daly
In earlier action, local hero Neil Seery and Geordie Mark Platts put on an entertaining flyweight battle. In the second round, the Irishman’s hurtful punches took their toll. Platts buckled and was finished off by a rear-naked choke at 2:36 of the frame. Bright young thing Tommy Quinn and veteran Jack Mason put on a 15-minute war of attrition. Mason was awarded the split decision victory (29-28, 29-28, 28-29) after three grueling rounds.

Dubliner Paul Redmond showcased his energetic jiu-jitsu game, then signed off with some good old fashioned ground-and-pound to end the challenge of Yuri Malko at 2:05 of the second round.

Brett Sizeland took Victor Peixoto’s back, then let the punches fly. With nothing coming back, Sizeland took the knockout win in just 92 seconds.

In amateur preliminary action: Stephen Owens defeated Cormac Copeland by way of ground-and-pound at 1:52 of the second round, Kieran O’Brien won by unanimous decision against Martin Downey (30-27, 30-27, 29-28), Tony Keane scored a first-round TKO win over Sean Tobin at 1:53, and Konrad Iwanowski triangled Dennis Perry at 2:36 of the second round.