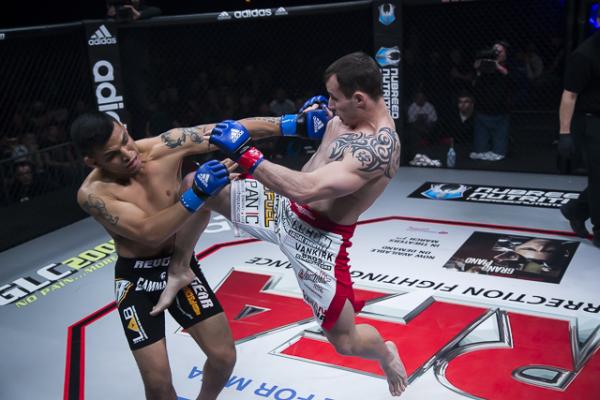 
Dakota Cochrane played the role of escape artist to perfection.

The Omaha native survived a multitude of Efrain Escudero submission attempts to hold on for a nail-biting unanimous verdict over “The Ultimate Fighter 8” veteran in the RFA 13 headliner at the Pershing Center in Lincoln, Neb. on Friday night. All three cageside judges scored it 29-28 in favor of Cochrane.

Cochrane (16-5), who was eliminated during preliminary competition on “The Ultimate Fighter 15,” was able to effectively land takedowns in the first and second round. Although Escudero spent much of the opening 10 minutes on his back, he nearly trapped his adversary with a triangle choke in round one and a guillotine in round two. Still, it was fairly clear that Cochrane was ahead on the scorecards heading into the final period.

“I knew he was slick on the ground. I knew that coming in so I really prepared for that,” Cochrane said.

It got considerably more dire for Cochrane in round three, as Escudero clipped him with a left hand and deftly transitioned to his back. During that process, Escudero (21-8) was able to secure a body triangle that trapped Cochrane’s right arm. Escudero wasn’t able to secure a rear-naked choke from the position but Cochrane was helpless to defend against what seemed to be an endless stream of punches to the head. However, the MMA Lab member was unable to generate enough power with those strikes to put his foe in serious danger.

Cochrane would finally escape the predicament and finished the harrowing round in top position.

“I knew if I just kept telling the ref I was all right -- which I was -- [I could survive], but it was a tough situation. That’s one you should not be in,” Cochrane said.

In the co-main event, Finney’s Hit Squad prospect Andrew Sanchez brutalized Miles Marshall with ground-and-pound to earn a technical knockout 1:25 into the second round of their middleweight clash. With the victory, Sanchez earns a shot against reigning RFA 185-pound king Kevin Casey at a later date. 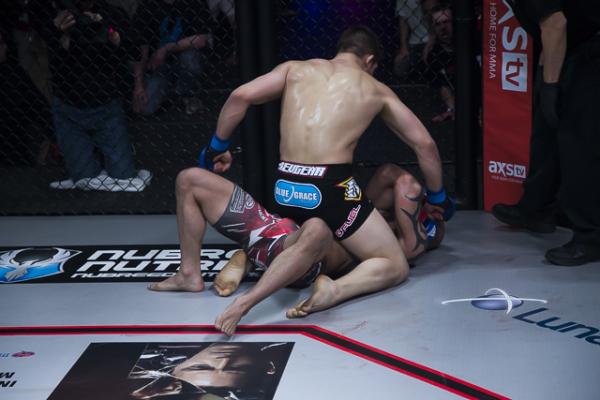 Photo: M. Boyce/Sherdog.com
Sanchez mauled Marshall for a title shot.
“The guy’s [Marshall] extremely powerful. I don’t know what he’s going to do. He’s unorthodox, which makes me nervous,” Sanchez said. “I didn’t want to stay on the feet with that guy. It takes one big Miles ‘Beast Mode’ Marshall punch and I’m out. So I wanted to take it to the ground -- that was the plan all along.”

Sanchez (5-0) didn’t wait long to put his plan to work, as he grounded Marshall (3-2) almost immediately. At first, Marshall was able to and some solid offense from his back and even transitioned to a leg lock, but it wasn’t long before Sanchez’s assault took its toll.

“El Dirte” chipped away with punches, hammerfists, elbows and knees to the body over the course of the opening five minutes, and by the time the frame expired, Marshall was bloodied and winded.

Sanchez wasted little time in taking Marshall’s back in the second round. From there, he flattened his opponent out and teed off with a series of left and right hands. Marshall then surrendered mount as Sanchez continued to pound away. After giving the Nebraskan plenty of time to mount an intelligent defense, referee Dave Jobeun finally intervened on Marshall’s behalf.

Earlier, a welterweight clash between Chidi Njokuani and Chris Heatherly ended prematurely after Njokuani landed an elbow to his opponent’s spine with 3:31 remaining in the opening frame. Since the strike was deemed to be unintentional by referee Bobby Wolmbacher, the bout was ruled a no contest. Heatherly remained prone on the canvas for several minutes after the elbow before he was taken away from the cage on a stretcher. However, a report from AXS-TV revealed that Heatherly was able to walk upon returning to the locker room.

Before the foul, Heatherly was having his way against the taller, longer Njokuani. He landed a takedown within the first minute and eventually transitioned to his opponent’s back. Njokuani (10-4, 1 NC) escaped the ensuing rear-naked choke attempt, but Heatherly (7-1, 1 NC) immediately went for another takedown. As Heatherly pressed his foe against the fence, Njokuani landed the elbow that would ultimately end the contest.

A tenacious, grinding approach carried Luke Sanders to a decision triumph over Dan Moret in a featherweight clash. All three judges scored the out 29-28 in favor of the Nashville, Tenn., native.

Things did not look promising early for Sanders (7-0), as he was clipped early in the first round while attempting to narrow the gap against his opponent. While Moret (6-1) enjoyed a clear advantage on the feet thanks to accurate punches and kicks, Sanders was able to alter the course of the bout over the final 10 minutes. Moret was rarely able to find a comfortable striking distance again as Sanders wore his man down with takedowns and clinches to seal a hard-fought victory.

Ryan Shell had no answers for the wrestling of T.J. Hepburn, as the former NCAA Division II national champion cruised to a unanimous verdict (30-27, 30-27, 29-28) in a lightweight affair. Hepburn improves to 3-0, while Shell falls to 5-1.

Hepburn landed takedowns in each round, including a first-round slam in which he carried his opponent from one end of the cage to the other before dumping him on the canvas. The Kearney, Neb., native spent much of the fight in top position, landing methodical elbows and threatening with a rear-naked choke late in round three.

Darrick Minner (8-3) submitted Austin Lyons (10-3) with an armbar 3:39 into the opening frame of their bantamweight bout to kick off the main card. It was the sixth career victory via tapout for the Nebraskan, who earned his first victory of 2014. Minner took his opponent down twice and threatened with several submissions before eventually transitioning to the fight-ending maneuver.