MANCHESTER, England -- The British Association of MMA based their fifth installment around the British homecoming of Strikeforce welterweight Paul Daley and the man they call “Semtex” delivered in trademark style, blowing Japan’s Yuya Shirai away in just 106 seconds.

Shirai pecked at Daley with a couple of leg kicks before he was floored with a jab. The writing was on the wall, especially when the Briton's second punch, another jab, buckled Shirai's legs. The inevitable finish came shortly after. With no fear of reprisals, Daley led with an uppercut and followed it up with a left hook. Shirai crumpled against the fence. It was all over bar the shouting, but a couple of perfunctory hammer fists landed to rid the ref's mind of any doubt.

Daley scaled the fence and milked the cheers of the delirious crowd. A sweet victory, for the man himself and his new employers, but it means little in the grand scheme of things. Shirai never posed any real threat and “Semtex” will face far tougher challenges when back on Strikeforce duty, especially should he take on a much-anticipated fight with the promotion’s welterweight champion, Nick Diaz. 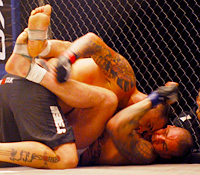 M. Rhodes/Sherdog.com
Rodriguez controlled from the top.
James McSweeney and former UFC heavyweight champion Ricco Rodriguez have had little good to say about each other in the run up to BAMMA 5 and the bad blood manifested itself in the form of a comic stare down through the fence during McSweeney's ring walk. Once the action got underway in the 217-pound catchweight bout, “The Hammer” looked set to get back to winning ways, flooring Rodriguez with a looping right hand. “Suave” shook it off and took his man down into his world. McSweeney struggled on the floor and almost fell victim to a nifty knee bar. The bell then saved him from a heel hook. The former UFC champ continued to dictate the fight from top position for the remaining 10 minutes to win by scores of 30-27 (twice) and 29-28.

"He clipped me. He hit me really hard and for a second there I was almost out,” Rodriguez admitted. “James McSweeney is a tough guy, but I've been around and I have the experience to deal with these situations."

This experience dictated the shape of the fight: "I was told he would be open for submissions, but he was better than I thought he'd be. I knew I was in control and doing enough. I was controlling him and winning the fight so there was no need to take risks." 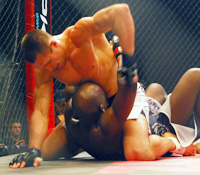 M. Rhodes/Sherdog.com
Makhonin took out “Professor X.”
In the other featured fight of the evening, rising U.K. star Alex Makhonin took care of UFC veteran Xavier Foupa-Pokam. “Professor X” wobbled Makhonin with a short right, but the Lancastrian withstood the barrage that followed and came on strong at the close of the opening round. In the second, it was punishment time again for the Frenchman.

After a tit-for-tat muay Thai interlude the fight went to the ground. Makhonin mounted Foupa-Pokam and dished out a brutal helping of ground-and-pound forcing the stoppage at 4:48 of the second round. “Professor X” may have been on the slide in recent times, but he is still a name on the European circuit and this was a healthy step up the career ladder for Alex Makhonin.

Brazilian middleweight Claudio Henrique Da Silva stepped in at short notice to replace the big hitting BAMMA favorite John Philips. Making the most of his late call up against Jean Francois Lenogue, Da Silva dominated on the floor before signing off with a rear-naked choke at 2:51 of the first frame. Jason Ball evaded Peter Duncan's single leg attempts, dominated standing up then sealed the deal with a crunching knee that left his opponent out cold two minute even into the second round. 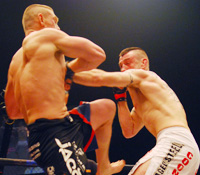 M. Rhodes/Sherdog.com
Cahoon (right) outslugged Mills.
Local hero Lee Cohoon had some hairy moments but came through to stop Rob Mills with a relentless onslaught. Mills put together some convincing submission attempts but was found out on the feet by the rapid-firing Manc.

Tim Newman toughed it out to get the nod from the judges. He looked vulnerable when eating a series of knees to the head in the rock em sock em second round but took a controversial split decision over Diego Vital. The fight between Paul Cook and Michael Johnson also went to the cards, with Johnson winning a unanimous decision.