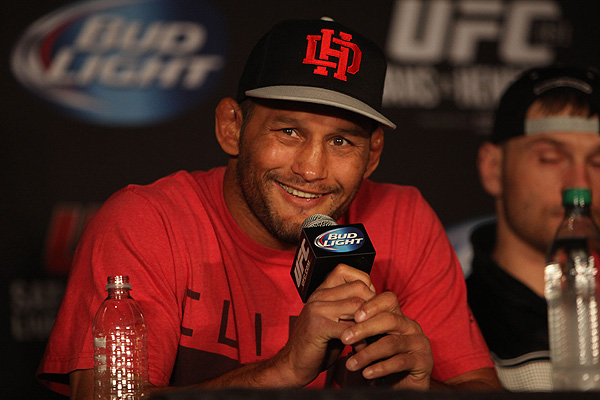 
Dan Henderson will attempt to halt a two-fight skid when he squares off against Tim Boetsch at UFC Fight Night in New Orleans.

The middleweight matchup was announced Friday on Fox Sports 1. In addition, the promotion announced two more bouts for the June 6 event, as Matt Mitrione will meet Ben Rothwell at heavyweight, while Joe Proctor will lock horns with Justin Edwards at lightweight.

UFC Fight Night "Cormier vs. Bader" takes place at Smoothie King Center in New Orleans and is headlined by a light heavyweight clash between Daniel Cormier and Ryan Bader.

Henderson last competed at UFC on Fox 14, suffering a first-round TKO loss to Gegard Mousasi 1:10 into the opening frame on Jan. 24. The 44-year-old former Pride and Strikeforce champion has lost five of his last six in the Octagon.

Boetsch, meanwhile, submitted to a Thales Leites arm-triangle choke 3:45 into the second round in his last outing at UFC 183. “The Barbarian” is 6-4 since moving to 185 pounds in 2011.

Mitrione went 3-0 in the Las Vegas-based promotion in 2014, posting knockout triumphs over Shawn Jordan, Derrick Lewis and Gabriel Gonzaga in succession. The 36-year-old “Meathead” has competed exclusively in the Octagon during his pro tenure, posting a 9-3 mark overall since his stint on “TUF 10.”

Rothwell enters the heavyweight clash on a two-fight winning streak, having scored TKO victories over Brandon Vera at UFC 164 and Alistair Overeem at UFC Fight Night “Jacare vs. Mousasi 2” in his last two appearances.

Proctor last fought at the “TUF 20” finale, where he submitted to a Yancy Medeiros guillotine choke in the opening frame. Edwards has fallen to Ramsey Nijem and Brandon Thatch in his last two outings.