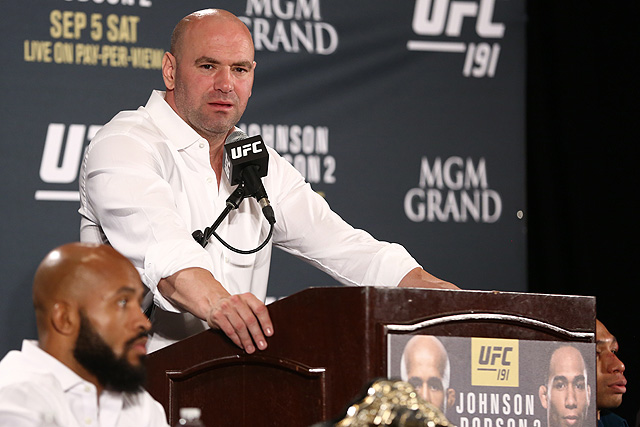 
There is a growing sense of inevitability that seems to accompany each Demetrious Johnson title defense.

The flyweight king has become so dominant that his opponents often struggle to mount any kind of meaningful threat against him, and Saturday’s rematch against John Dodson was no exception. While Dodson put a scare into Johnson when they initially squared off at UFC on Fox 6, “The Magician” was unable to duplicate the feat at UFC 191.

As a result, some of the fans in attendance at the MGM Grand Garden Arena became restless as the bout grew increasingly lopsided, showering the headlining combatants with boos as the event drew to a close. Even as he continues to establish himself as one of MMA’s pound-for-pound greats, Johnson has a hard time finding the appreciation he deserves.

“You have those drunk dummies at the last five rounds, these guys have been here since 5:30 [p.m.] drinking,” UFC President Dana White said. “I don’t know what they expect, but he looked unbelievable tonight. Anybody that knows anything about the sport, Dodson was the guy to fight. This was the fight. Dodson has the power, the speed, he had the experience. He’s been in there with him before.

“Demetrious Johnson dominated him tonight and absolutely destroyed him.”

While pitching a virtual shutout against Dodson didn’t excite the masses, the performance was especially satisfying for Johnson, who grew weary of listening to his opponent’s critiques during the promotion of the fight. Johnson was admittedly happy to put his rivalry with the Jackson-Wink MMA product in the rearview mirror.

“I would say so, especially how much he was saying I’m a plague, I’m a boring fighter and all that stuff,” Johnson admitted. “For me, I don’t let it get to me emotionally, but each time we would have a staredown, I could feel the emotions coming from him. But that fight’s behind me; it was a great fight. Me and John Dodson went out there, and we had a good fight. I wanted to try and push him and make him work, and now it’s on to the next one. That’s how I look at all my fights.”

Johnson kept the pressure on Dodson all night, never allowing his foe a chance to find the same opportunities he did more than two years ago. In that first fight, Dodson dropped Johnson once and had him dazed on a couple more occasions. This time, however, “The Magician” didn’t have any tricks up his sleeve.

“I had more success in the first fight because both of us were going in there not knowing what each other’s strengths were. This time we went in there more cautious; he was more intelligent this time,” Dodson said. “I was trying to defend more takedowns and he was just trying to push that pace. DJ did a wonderful job of that. He came at me and my hat’s off to him.

“I can’t sit there and badmouth him because the man’s still the champion and he did something that everyone saw him doing.”

While the two flyweight combatants will probably never be the best of friends, Johnson made it a point to bury the hatchet during a post-fight exchange.

“I just walked up and said, ‘Hey congratulations on being a father; it’s the best thing that’s ever going to happen to you in the world.’ I said even though you talk s--t about me I respect you as a man and that was it,” Johnson said.

Now, the focus shifts to new challenges for a champion who continues to get better with each outing. While Johnson has ruled out a move to bantamweight for the time being, White hinted that something interesting could be in the works for the flyweight king’s next Octagon appearance.

“There’s always a contender, man,” White said. “We are working on something right now, and when it happens you’ll agree.”

“And I’ll be ready,” added Johnson.