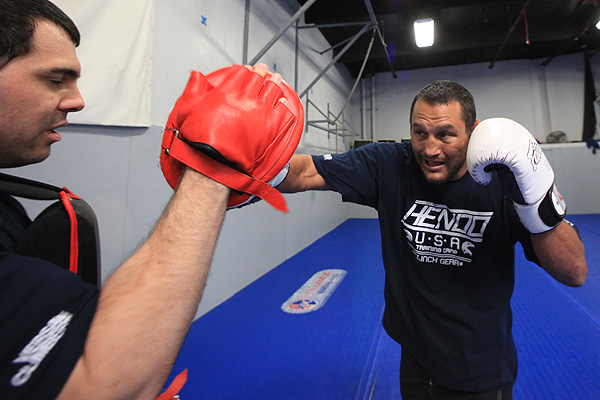 Just hours after defending his UFC light heavyweight championship for the third time, Jon Jones already knows who will try to take his title next.

“I feel great that I already have a mission,” Jones told the media of his upcoming title defense. “I’m going to work extremely hard to better myself. Dan Henderson is awesome, and he has a large fan base. I’m sure the haters are going to come out right away. He has extreme knockout power, and I’m excited to conquer this challenge. My goal will be to finish Dan Henderson, with all due respect.”

Jones emerged victorious from his long-awaited showdown with Rashad Evans in Saturday’s main event at Philips Arena in Atlanta, taking a unanimous decision to retain the gold. Using his superior reach to his advantage, Jones kept his former teammate at bay for the duration of the 25-minute contest.

“I felt great [tonight]. Rashad is an awesome opponent. He’s fast, and he punches hard. I respect Rashad a lot,” said Jones, who previously trained with Evans at Jackson’s Mixed Martial Arts in Albuquerque, N.M. “I would say that Rashad was my toughest fight to date. A lot of it was how tough he is, and some of it was my insecurities. He did big-brother me a few times in practice, so I think I was a little hesitant in some spots. I think this fight just brought me to another level mentally.”

Jones truly turned the tide in his favor in round two, when he blasted Evans with a series of standing elbows that staggered the former champion. Though “Suga” tried to work his way into punching range and even shot for several takedowns, Jones defended and countered nearly all of Evans’ offense. Nevertheless, the champion was still not completely satisfied with his performance after going the distance for the first time as UFC champion.

“I move smoothly when I’m working a heavy bag, but tonight I felt gangly and uncoordinated at some points. I think I just need to trust my [abilities] a little more,” Jones said. “[Trying to earn a] knockout was important to me. I wanted to back up what I said. I’m a big believer in goal-setting. Having goals keeps you on a path and keeps your eyes set on something. You can train to win, or you can train to finish and do something amazing. I didn’t [get the knockout], but I still sit here extremely grateful that neither of us are injured and live to fight another day.”

Jones’ collision with Evans marked the culmination of a feud roughly one year in the making. With the conflict between the two light heavyweights settled -- at least for the time being -- Jones was able to reflect on the lessons learned from fighting a former friend.

“I learned to stay away from other elite level fighters,” said Jones. “I have a lot of thinking to do about this situation. I hope to rekindle some communication with Rashad, and I hope we can do that in private. There is a lot of emotion between us that can lead to a friendship.”

While Jones clearly controlled the majority of the action in the cage, the champion still displayed respect for Evans’ punching power at several points, a fact that may have factored into his decision to pull guard in the fight’s waning seconds.

“I wouldn’t say I was hurt, but I would definitely say [Evans] wobbled me. There was one point where I got hit and tried to side-shuffle, and I stumbled. I was happy I was able to take punches from Rashad, because he hits hard,” said Jones. “I pulled guard because I am a mixed martial artist. A lot of times, people look at [pulling guard] as a sissy move, but I think a lot of [Brazilian jiu-jitsu] practitioners around the world loved it. It was a smart move.”