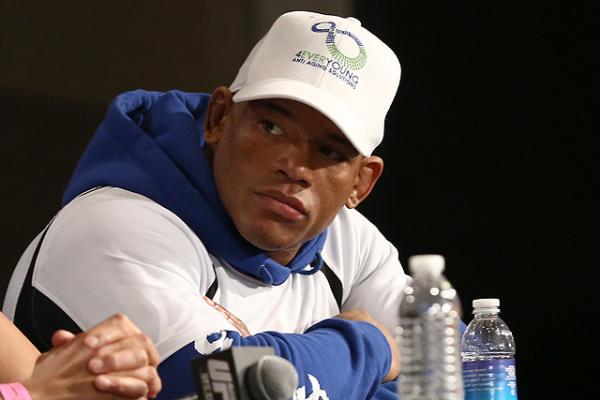 Hector Lombard’s road to the title could lead to one of his teammates. | Photo: Dave Mandel/Sherdog.com


Hector Lombard was not happy with Josh Burkman’s approach in their welterweight bout at UFC 182.

While the Cuban judoka was able to land his share of hard leg kicks and power punches, Burkman frustrated his opponent by spending much of the bout in retreat mode.

“I think it was okay he was running. He's an awkward guy to fight; all he wanted to do was run. He came to survive, he didn't come to fight,” Lombard said following his unanimous decision triumph at MGM Grand Garden Arena in Las Vegas on Saturday night.

UFC President Dana White had a different take on the matchup.

“When guys run away from you, you cut the ring off and stop them from running away from you,” White said during an interview on Fox Sports 1. “Burkman was no chump tonight. He’s a tough, durable guy who took some big shots from Lombard tonight.”

As it turns out, Burkman was operating at far less than 100 percent. Injuries and illness hindered both the World Series of Fighting veteran’s preparation and performance. Still, Burkman has yet to be knocked out in 37 professional fights.

“He did what I expected, I just didn't do what I expected. I had the worst camp of my life: I sprained my ankle, I hurt my hip, dislocated a rib and got sick so I had to go on antibiotics,” Burkman said. “But I'm a man of my word and I signed to fight Hector Lombard and that's exactly what I did. Hector is also one hell of a fighter.”

Lombard has now won four of his last five in the Octagon, including three straight victories over Burkman, Jake Shields and Nate Marquardt. The American Top Team product is hungry for a shot at welterweight gold. If that means eventually facing training partner -- and current champion -- Robbie Lawler somewhere down the road, “Showeather” is ready to at least have that conversation.

“Next, I'm going to fight whoever gets me to the title. If that means I'd have to fight Robbie Lawler, that's something we'd have to discuss with our coaches," Lombard said.

For now, Lawler is likely locked into a trilogy bout with Johny Hendricks. Lombard could potentially be paired with Rory MacDonald, who was recently passed over for a title shot, in a title eliminator bout. White, however, wasn’t ready to commit to anything following the conclusion of UFC 182.