Adams takes the center of the Octagon and immediately lands a kick on Kasanganay’s cup. Referee Mark Smith pauses the action to give Kasanganay some time to recover. The action resumes and Kasanganay lands a low kick and moves forward with a big right hand. Adams lands a couple body kicks before the middleweights clinch up, and Adams shoves his man into the fence. The combatants trade leg kicks as they size each other up. Kasanganay misses a big overhand right, and Adams answers with a thudding low kick. Adams continues working leg kicks before they clinch again. Adams just misses a big knee on the break. Kasanganay clips Adams with a glancing overhand right. Adams counters a Kasanganay low kick with a right hand. Kasanganay presses forward and Adams catches him with a knee. Adams follows a leg kick with a punching combination. Adams, a muay Thai specialist, is doing a good job mixing up his kicks in Round 1. Adams shoots for a takedown, but Kasanganay defends against the fence. Kasanganay lands a big left hook in the final 10 seconds, and Adams responds with one final leg kick. 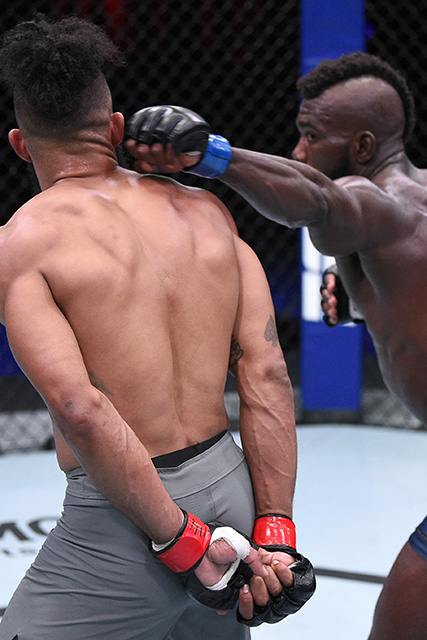 (+ Enlarge) | Photo Courtesy: Alex Davis
Kasanganay (right) dominated down the stretch.
Kasanganay comes out with a leg kick at the outset, as he pressures Adams early. Kasanganay lands a combination and remains on the offensive. Adams answers with a couple solid right hands. Kasanganay just misses a big overhand right, as he has struggled to find the range on his power shots. Kasanganay jabs the body. Adams steps in with a knee down the middle, and Kasanganay counters with a straight right. Kasanganay pressures and lands a right hoook to the body. Moments later, he stings Adams with a solid job. The middleweights trade in the pocket for a moment, and both men land some shots in the exchage. Kasanganay dumps Adams on his back with about 1:30 remaining, and he sets up in his opponent’s guard. Adams slides his way back to the fence, where Kasanganay takes his foe’s back. Kasanganay lands a couple knees to the body as Adams tries to control the wrists against the fence. Adams works his way up as the horn sounds.

Kasanganay lands a clean front kick to the face following an intial exchange, and Adams grabs the leg. Kasanganay briefly threatens a guillotine but relents, and he drives Adams into the fence. Kasanganay works to get his man to the canvas and takes Adams’ back once he’s on the mat. Adams absorbs some knees to the body as he tries to control his opponent’s wrist while on all fours. Kasanganay grapevines Adams’ right leg and lands a steady barrage of right hands to the head. Kasanganay continues to chip away with punches as Adams covers up. The punches get heavier and referee Mark Smith urges Adams to defend. Adams stays on all fours holding Kasanganay’s wrist, as he gets punished with knees to the body. Adams finally reverses position and returns to his feet with 1:20 remaining in the fight. Kasanganay presses Adams against the fence and lands a hard right elbow to the head. Kasanganay connects with an inadvertent low knee with a little less than a minute left and the action is paused. Adams uses virtually all of the alloted time to recover from the foul. The fight resumes with 52 seconds left. Kasanganay remains the aggressors and tries a superman punch. Kasanganay forces the clinch, takes Adams down and attaches himself to his adversary’s back. Kasanganay ends the fight landing ground-and-pound from back control. 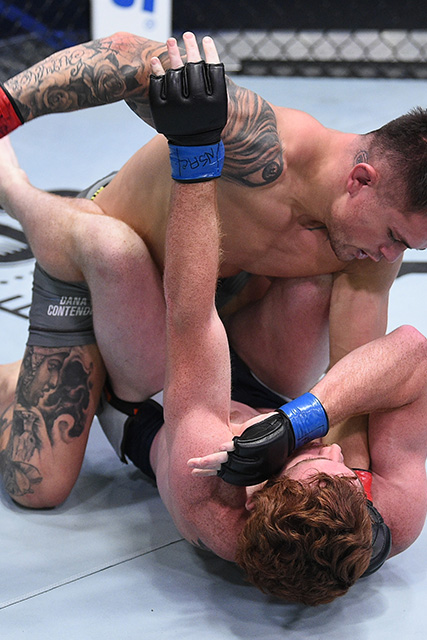 (+ Enlarge) | Photo Courtesy: Getty/UFC
Swain (bottom) could not continue (rib injury).
Swain moves in and lands a body kick before Laramie drives his opponent into the fence. Laramie steps back and lands a low kick, which is answered by Swain. Swain misses on a high kick and Laramie follows him to the canvas. Swain briefly grabs a leg lock, but Laramie scrambles into top position. Swain is active from his guard and he frames an armbar. Laramie escapes but after dropping a big punch from above he finds himself back in danger. Swain goes belly down, but Laramie scrambles into top position and is back in his foe’s full guard. Laramie drops a couple hammerfists and a short elbow. Laramie passes to half guard and lands punches to the head and body. More elbows from Laramie, who is avoiding trouble this time around. Laramie passes into half guard again, as he continues to rain down short punches and elbows. A couple powerful hammerfists and body punches find their mark from Laramie before the horn. In his corner, Swain reveals that he can’t breathe due to a potential rib injury and the cageside doctor calls off the featherweight bout. Swain is still in serious pain on his stool as Laramie celebrates his victory.

Demopoulos wastes no time attacking with body kicks and low kicks. A straight right hand from Demopoulos stings McKenna briefly. Demopoulos gets tripped up during an exchange and McKenna assumes top position. Demopoulos wants to frame a triangle but her right leg isn’t free to complete the maneuver. McKenna sits on her foe’s leg and drops a left hand before moving into guard, where she lands a forceful elbow. Demopoulos is attempting to use her guard to control McKenna’s posture. McKenna remains heavy on top, deftly navigating her adversary’s guard. Not a lot happening her, as Demopoulos can’t free her other leg. However, the American pulls on McKenna’s left arm, cranking on her shoulder. The Wales native frees herself and lands some elbows and punches to close out the round. 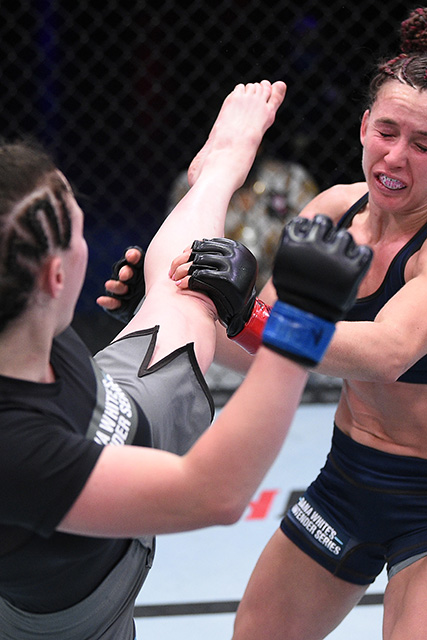 (+ Enlarge) | Photo Courtesy: Getty/UFC
McKenna soundly beat the LFA 115-pound queen.
Demopoulos lands a big right hand, and McKenna responds in turn. A low kick from Demopoulos is countered by a hard right from McKenna. McKenna counters another low kick with a right hand. The strawweights trade awkwardly in close quarters and McKenna powers her opponent to the canvas, landing in half guard. Demopoulos recovers position, and she’s using the rubber guard, much like she did in Round 1. McKenna stays tight, giving Demopoulos very little space to create a submission from her back. Moments later, Demopoulos is able to adjust her guard and now she has the triangle locked in. McKenna works diligently, and she pops her head free and takes her foe’s back. McKenna unloads with punches to the side of the head, but she’s struggling to get both hooks in. McKenna hangs on with one hook in, landing a few more punches until the horn sounds.

Demopoulos marches forward and lands a stiff jab. Demopoulos attempts a cartwheel, but McKenna is unfazed. McKenna lands a right hand. McKenna with a two-punch combination and follows with a side kick to the face. The clinch, and McKenna lands a knee in close quarters and an elbow on the break. Demopoulos finds the range on her right hand. McKenna ends up in top position with a little more than 3:00 remaining. McKenna pounds away with left hands and elbows from half guard. McKenna postures up and lands some more good shots to the face of her opponent. McKenna covers Demopoulos’ mouth and lands a left to the head. Demopoulos tries to work her guard up and lock in what appears to be an armbar. McKenna stacks her foe, which makes it difficult for Demopoulos to extend the arm. Demopoulos gets one last ditch attempt at the armbar, but McKenna escpaes. They return to their feet, and both strawweights trade heavy punches on the feet in the waning seconds until the horn. 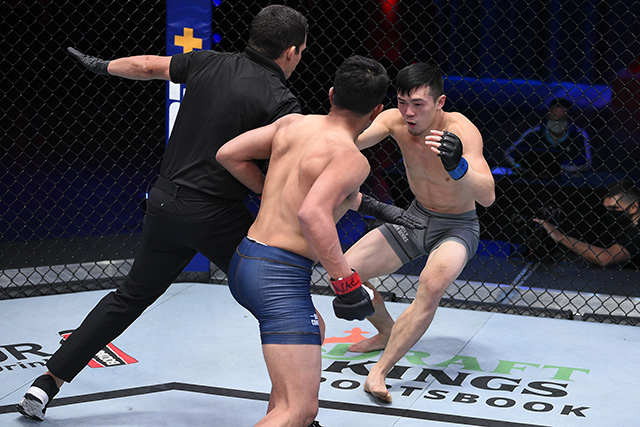 (+ Enlarge) | Photo Courtesy: UFC/Getty
Yanez made quick work of Huang.
Huang opens with a low kick and Yanez counters with a lead hook. They clinch and Yanez lands a knee to the body. A clean two-punch combination from Yanez wobbles Huang momentarily. He’s back to his feet in short order, but Yanez forces the action, landing a left hook directly on the chin followed by a devastating right hand. Huang buckles to a knee and even though he pops right back up, referee Jason Herzog has seen enough. This one is over, and Yanez has the fifth-fastest finish in Contender Series history. 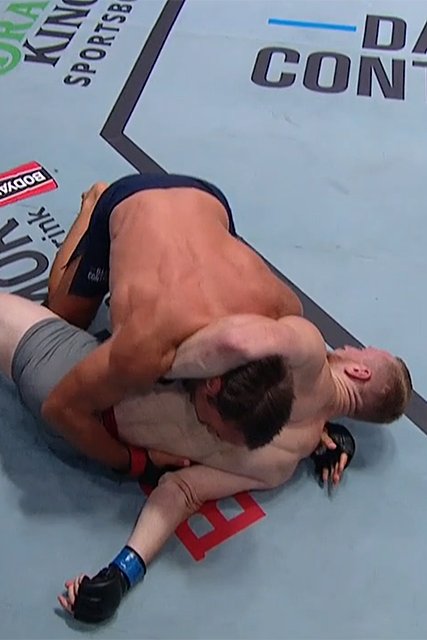 (+ Enlarge) | Screenshot Courtesy: Sherdog Staff
Pyfer suffered a serious elbow injury.
Pyfer lands a jab early as the middleweights feel each other out. They trade leg kicks. Pyfer backs up Stoltzfus and lands a right hand. Stoltzfus catches a kick and returns fire with another hard low kick. Stoltzfus is already making an impact with a steady diet of low kicks. A left uppercut to the body finds a home for Pyfer. Stoltzfus follows a superman punch with a front kick. Pyfer changes levels and succeeds on a single leg takedown, landing in side control. Stoltzfus quickly recovers full guard. Stoltzfus is active from his back as Pyfer attempts to posture up for ground-and-pound. Stoltzfus transitions to an ankle lock, but Pyfer is able to step out of danger. Stoltzfus hustles up and secures a body lock, picks Pyfer up and slams him on the canvas. Pyfer posts his arm to break the fall and his elbow is gruesomely dislocated in the process. The fight is over as soon as Pyfer hits the mat.