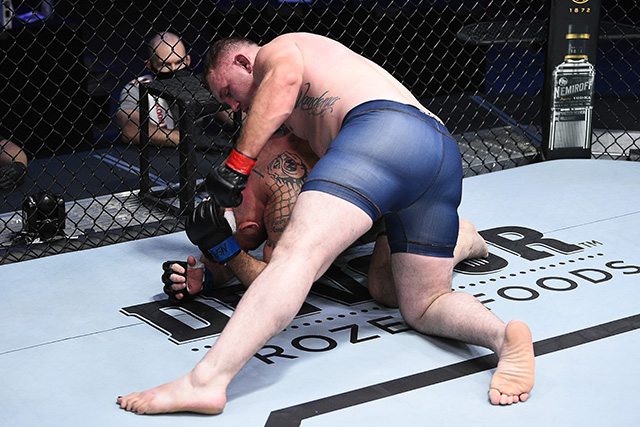 (+ Enlarge) | Photo: Getty/UFC
Vanderaa trapped Hunsucker and unloaded with leather.
Hunsucker throws a big overhand and Vanderaa ties him up and backs him into the fence, where he lands several knees to the body. They separate and Hunsucker rushes forward swinging wild, heavy punches. Vanderaa survives the onslaught and they return to the center of the cage. Hunsucker counters a kick with a left hook that lands and he unloads again with a heavy flurry of punches. Vanderaa lands an inside leg kick, but Hunsucker is the aggressor early, throwing everything behind his punches so far. Hunsucker loads up on a huge overhand right but Vanderaa eats it. Hunsucker wades forward but Vanderaa eludes a punch and secures a rear body lock. Moments later, Vanderaa dumps his man on the canvas. With Hunsucker on all fours, Vanderaa begins landing punches to the side of the head. Referee Jason Herzog is already taking a close look at Hunsucker, who isn’t doing much to defend himself. Hunsucker crawls to the cage, and Vanderaa uses his body weight to flatten his opponent out. More unanswered punches to the head land from Vanderra land, and Herzog has seen enough. This one is over.

Saldana makes Murdock stumble with a low kick right out of the gate. Saldana flicks out a jab, then lands another hard kick to his foe’s lead leg. Saldana’s nine-inch reach advantage is evident early, as he looks to pick Murdock apart at range. A spinning back kick to the body lands for Saldana. A low kick and left hook land for Saldana, and he eludes Murdock’s follow-up punching flurry. Murdock connects with a glancing high kick, and Saldana responds with a sharp jab. Saldana walks his foe down, blending in punching and kicks nicely. Murdock looks hesitant to pull the trigger in response. Murdock reads a flying knee from Saldana and secures a body lock, but Saldana frees himself without issue. Another spinning back kick to the midsection lands for Saldana. Murdock is struggling to find the range on his punches. Saldana fires out long straight punches before connecting with a kick to the body. Murdock lands a low kick before the horn.

Murdock fires off a hard one-two but comes up short. Saldana lands a whipping low kick to Murdock’s lead leg. Saldana misses a spinning back elbow and stumbles backward when Murdock lands a left-hand counter. Murdock blocks a high kick but eats an inside low kick. Murdock moves forward and absorbs a front kick to the gut. Saldana with a grazing high kick followed by a jab. Murdock connects with a pair of inside leg kicks but can’t follow up with the ensuing flurry. A left hook to the body lands for Saldana, who also lands an inside low kick shortly thereafter. Murdock blocks a high kick and backs Saldana into the fence, but he can’t capitalize. Saldana remains elusive while landing crisp jabs and hard low kicks. Murdock rushes forward buy eats a straight left counter. Saldana finds the range on a high kick, but Murdock eats it without issue. Saldana closes out the frame by landing a pair of front kicks. 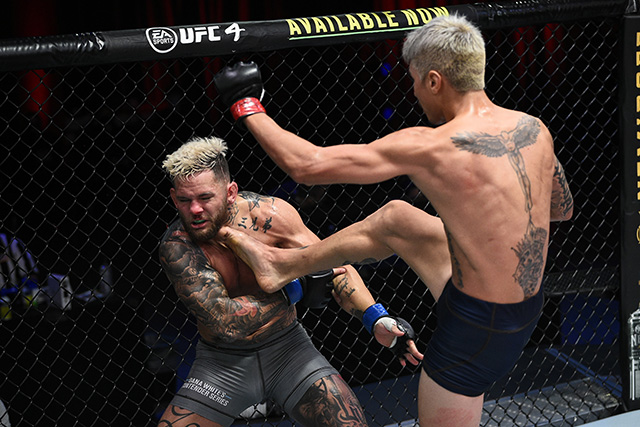 (+ Enlarge) | Photo: Getty/UFC
Saldana connected with two front kicks.
Saldana lands a low kick and a jab early, and then he really picks things up offensively. A front kick to the face rocks Murdock, and Saldana follows up a stinging one-two combination with another front kick to the face. The last strike sends Murdock to the canvas, and Saldana hunts for the finish, unloading with standing-to-ground punches. Saldana moves to full mount, and then a series of unanswered right hands from above prompt referee Herb Dean to intervene on Murdock’s behalf.

Bahamondes lands a low kick at the outset and just avoids Gomez’s attempt to catch the kick. A long jab snaps Gomez’s head back. Gomez presses forward with looping power punches and is able to connect a couple on Bahamondes. Gomez follows two powerful right hands with a takedown attempt. Bahamondes defends against the cage and lands some elbows to the head before the separate. Bahamondes lands a knee in close, then follows a punching combination with a another nice knee right down the middle. A low kick from Bahamondes takes out Gomez’s legs momentarily. Gomez looks to close the distance and is stopped by a counter right hand. Gomez remains aggressive as he continues to stalk his opponent. Gomez pressures, but it’s Bahamondes who lands a combination in close quarters. Gomez changes levels for a single leg and drives his foe into the fence. Bahamondes lands short elbows to the head before freeing himself. A spinning back kick from Bahamondes lands to the midsection in the waning moments of the frame. 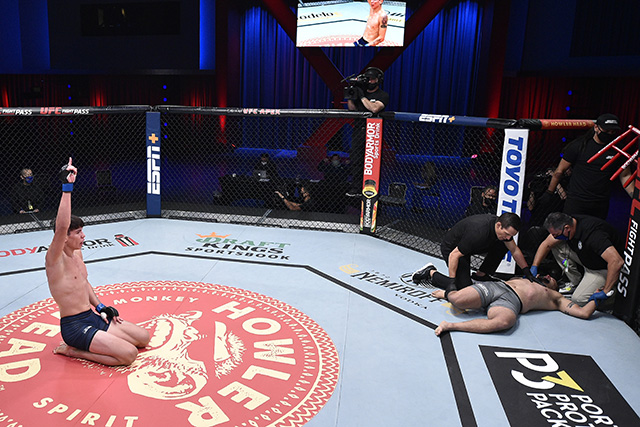 (+ Enlarge) | Photo: Getty/UFC
Bahamondes melted Gomez with a front kick.
Bahamondes opens with an outside low kick. Gomez rushes forward with punches before changing levels for a takedown against the fence. Bahamondes escapes, angles out and lands a combination. Back in the center of the cage, Gomez covers up and has his mouthpiece dislodged by another Bahamondes combination. Bahamondes sticks a couple jabs and then follows up with a rangy series of punches. Bahamondes is really in a rhythm now, blending in punches and kicks nicely. Gomez, meanwhile, appears to be slowing down. Bahamondes digs to the body and Gomez is now just a stationary target. Bahamondes catches Gomez with his head down and knocks him out cold with a front kick to the face. There’s no need for a follow-up, as Gomez is out as he hits the canvas. 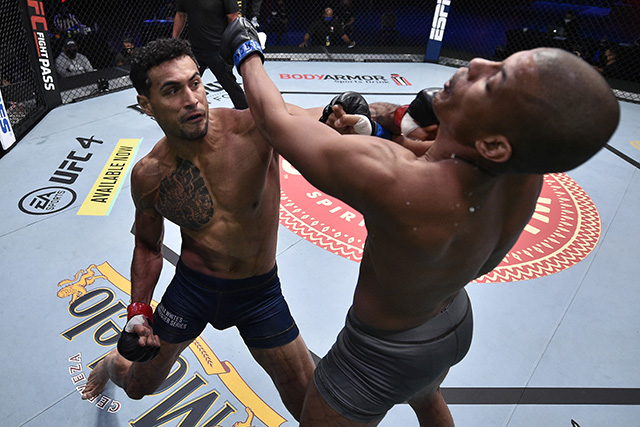 (+ Enlarge) | Photo: Getty/UFC
Ulberg punched his ticket to the UFC.
Ulberg lands a low kick and circles away from his foe’s return offering. Oliveira blocks a high kick and then lands a counter right. Oliveira fires off a hard inside low kick. A left hook connects for Ulberg. Oliveira attempts to press the action as he moves forward and fires off a lazy jab. Ulberg has no trouble avoiding it and he counters with a left hook. A left hook-right hook combination immediately follows from Ulberg. Both land clean, and the Brazilian topples face first to the canvas. Israel Adesanya’s sparring partner appears to have just punched his ticket to the UFC with an impressive KO victory.