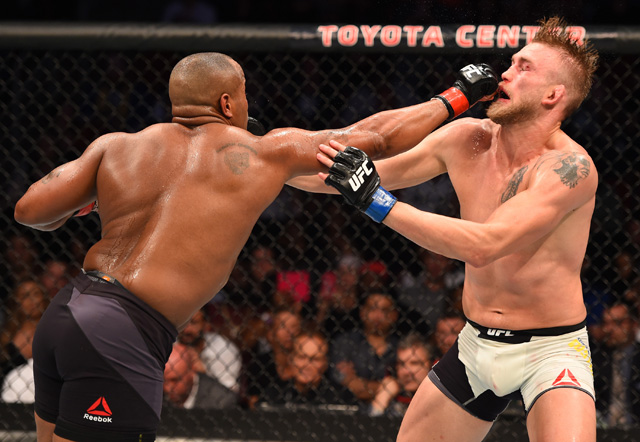 Cormier (17-1, 6-1 UFC) retained the undisputed Ultimate Fighting Championship light heavyweight crown with a split decision against Alexander Gustafsson in the UFC 192 headliner on Saturday at the Toyota Center in Houston. Scores were 48-47 (Sal D’Amato) and 49-46 (Kerry Hatley) for Cormier, 48-47 (Derek Cleary) for Gustafsson.

The two men engaged in a remarkable war of wills across five grueling rounds. Cormier set the early pace, as he delivered a slam takedown -- Gustafsson was vertical at one point, his head pointed toward the mat -- in the first round. The Swede answered back, cutting Cormier near his right eye with a left hook in the second before flooring him with a knee strike and follow-up punches in the third. The champion took Gustafsson’s best shots and did not blink.

Cormier found the inner strength and resolve to press through fatigue and considerable damage in the fourth and fifth rounds. He sucked Gustafsson into the single collar tie -- the site of his greatest success in the fight -- and bludgeoned him with right uppercuts to the face while clutching the back of his head with his free hand. By the end of the bout, Gustafsson (16-4, 8-4 UFC) was suffering from severe swelling to both eyes and a nasty gash across the bridge of his nose, having failed in his second attempt to capture UFC gold.


In the light heavyweight co-main event, Power MMA Team’s Ryan Bader maintained his upward trajectory at 205 pounds, as he cruised to a unanimous decision over former champion Rashad Evans. All three cageside judges scored it 30-27 for Bader (20-4, 13-4 UFC), who never seemed threatened.

Evans (19-4-1, 14-4-1 UFC) looked like a fighter that had not competed in 686 days. In his first appearance since 2013, the Blackzilians cornerstone was routinely beaten to the punch by his younger, fresher adversary. Bader fed him a stiff left jab, mixed in kicks to the body and legs and threaded sneaky right uppercuts through Evans’ defenses. Damage accumulated over time, as “Suga” grew more desperate and less effective. He also surrendered takedowns in the second and third rounds, a clear sign that Bader’s efforts had yielded the desired results.

Bader will ride a five-fight winning streak into his next outing.

Jordan (18-7, 6-4 UFC) enjoyed some success in close quarters, but an apparent rib injury suffered in the first round limited his effectiveness. Magomedov picked apart the former Louisiana State University fullback from the outside, popping him with lefts, rights and well-disguised kicks, many of them upstairs.

Magomedov, 28, has won nine fights in a row.


Team Alpha Male’s Joseph Benavidez kept his name on the short list of contenders at 125 pounds, as he took a unanimous verdict from Ali Bagautinov in a featured flyweight scrap. Benavidez (23-4, 10-2 UFC) swept the scorecards with 30-27, 30-27 and 29-28 marks from the judges.

A two-time combat sambo world champion, Bagautinov (13-4, 3-2 UFC) held his own in his return from a year-long suspension. The 30-year-old cut Benavidez on his left eyelid with a right uppercut, let loose with powerful haymakers and landed a pair of takedowns. However, he did not succeed in stringing together meaningful stretches of offense. Benavidez punched in combination and kept the “Puncher” off-balance with repeated kicks to the head, body and legs.

Benavidez, 31, has rattled off four consecutive wins since he failed to unseat flyweight king Demetrious Johnson at UFC on Fox 9 two years ago.


Takedowns, elbow-laden ground-and-pound and a few near submissions carried “The Ultimate Fighter” Season 18 winner Julianna Pena to a unanimous decision over Jessica Eye in a three-round women’s bantamweight showcase. All three cageside judges arrived at the same verdict: 29-27 for Pena (7-2, 3-0 UFC).

Eye (11-4, 1-3 UFC) was her own worst enemy. She had issues staying upright and controlling Pena on the mat, and in the second round incurred some self-inflicted damage, as she was deducted a point for an illegal knee strike to the head from the bottom. The penalty cost her the round and valuable momentum: She had threatened Pena with an arm-triangle choke and staggered her with a two-punch combination just before the bell.

Pena executed a takedown inside the first 20 seconds of round three, eventually climbed to the back and cinched a tight rear-naked choke. Eye escaped but later wandered into a one-armed guillotine, as Pena’s work on the ground punctuated the most significant victory of her career.